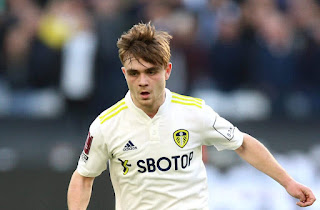 Marcelo Bielsa was asked in a recent press conference why Lewis Bate was taking so long to gravitate into his matchday squad. Leeds United were thin on the ground, to put it diplomatically, and several other prominent Under-23s had been asked to plug the gaps caused by injuries.

Bate, in contrast, was nowhere to be seen, other than appearing tracksuited up as the 21st man at Chelsea last month. His talent as a string-puller and natural pass-picker had shone through in the development league, exactly as Leeds expected last summer when they tempted him from Chelsea for a fee of over £1 million.

So if Leeds were down on numbers, central midfielders most of all, and Bate was ticking boxes at Thorp Arch, why the reluctance to push him on?

Bielsa thought about the question and then sent the ball back with interest, saying it was “more like something an agent or a parent” would ask. In short, it was his decision based on his judgement and his prerogative to make it.

But, closer to home, other people at the club wondered the same. What was it about Bate that was keeping him mothballed when dispatches from the academy said he had settled in so well?

It is not exactly a fresh point of discussion with Bielsa. He has been through this with Joe Gelhardt, the precocious forward who to most other people was like a big red button that had to be pressed. Bielsa could feel the tide of opinion begging for Gelhardt to get a go much earlier than he did, but the 66-year-old held off until the time felt right to him. “I observe,” Bielsa said, “and then I pick.” End of story.

Bate ploughed on in the background and waited for the nod, which came in the form of a start in Sunday’s FA Cup tie at West Ham United.

Any length of time spent in Bielsa’s company teaches a footballer to stay on their toes. He telegraphs so little and keeps so much to himself that a player like Bate can be watching everyone else flit between the academy and the first team and then find himself making his debut with next to no warning.

No integration from the bench, no gradual climb towards a starting place but straight in against a side who are fifth in the Premier League and used the sort of line-up which has taken them there. It was not quite the deep end — but was certainly far enough away from the safety of shallow waters.

Bate was part of a weakened Leeds team in London, but only in the sense that it was not full strength. Bielsa is fielding weakened teams every weekend because the first few minutes of every pre-match press conference he holds is taken up by news of the next injury. He complained on Friday that he was being “interrogated” about the fitness of his squad, but the topic keeps arising because he always has something to report.

On Friday it was Gelhardt, out with an ankle injury. On Sunday it was Patrick Bamford, missing from West Ham with a hip issue. A nothing-to-lose cup tie at West Ham was also an exercise in protecting what was left of the platoon.

Bate was part of that process, but his 45 minutes on the pitch released a player who, like Gelhardt, is seen by Leeds as a shrewd investment. The 19-year-old cost £1.2 million — the size of fee Leeds are committing to more and more at youth-team level — and what sold Elland Road to him was the promise of a viable first-team pathway. He would have more chances than at Chelsea, Bate was told, and with Billy Gilmour blocking his way at Stamford Bridge, Leeds’ promise sounded credible.

Bielsa likes to compromise on squad size in the interests of leaning on Under-23s. Any amount of research would have told Bate that it was not unusual to see Leeds affected by injuries and reliant on their academy. He liked what the club were projecting. An offer of a new contract at Chelsea was rejected.

Since then, Bate has chipped away in the development squad, watching senior players drop like flies but unable to make the bench until Bielsa could barely field a recognisable line-up against Arsenal before Christmas. It was hard to fathom why no room had materialised for him before then, but the lie of the land at Leeds means chances with Bielsa usually come eventually. One came for Leo Hjelde yesterday too, a centre-back who has been much closer to the fringes of the Premier League this season.

They were, patently, thrust forward in part by Bielsa’s inability to pick from anything like a full dressing room. The same went for Sam Greenwood, who started up front after Bamford was withdrawn in the lead-up to the trip to London.

But Bate and Hjelde were players whom Leeds made beelines for in the last window, players they pursued for some time, and both were due a run with the pack. Bate got the first half and coped in a flat and often sleepy tie, asking for the ball and trying to use it. Hjelde got 78 minutes and tangled enthusiastically with Michail Antonio — the definition of a handful. In a more understated way than Gelhardt, their debuts made you want to see more of them.

Bielsa was caught between stools in the sense that he had players to protect but a reputation to guard too. “Had we played an alternative team — that’s to say, all the Under-23s — people would have claimed that I didn’t respect a historic competition,” he said. When half-time came, he removed Bate and Greenwood and introduced Raphinha and Stuart Dallas, trying to stop West Ham entering the fourth round in third gear. It almost worked before Jarrod Bowen sealed West Ham’s 2-0 win in injury time.

Leeds were knocking on the door when Bowen killed the tie at the death, but West Ham manager David Moyes complained afterwards about a looming midweek game against Norwich City and Bielsa has the injury list from hell to deal with. The absence of extra time was a quiet blessing, save for the 9,000 who travelled with Leeds.

For all that he seems to admire the FA Cup, the one thing England has taught Bielsa about it is that the stars have to align almost perfectly for a coach in his position to commit everything to it.

The FA Cup was condemned to know its place yesterday and on Bielsa’s watch, it often has. But for Bate and Hjelde, West Ham provided the first steps forward; steps that were overdue on the evidence of the game.

They will remember this tie, even if no one else does.