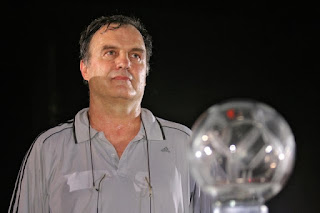 Marcelo Bielsa's name continues to be chanted from the Leeds United terraces - and the Whites head coach has opened up on just what that means.

Bielsa has been in charge of the Whites for three and a half years and the Argentine has transformed the club's fortunes, steering Leeds to promotion as 2020 Championship champions and then a superb ninth-placed finish upon United's Premier League return.

The club's second season back in the big time has so far been somewhat more difficult, Leeds battling a huge number of injuries and fifth-bottom ahead of this afternoon's clash at fourth-placed West Ham.

The Whites suffered particularly heavy defeats in December at Manchester City and at home to Arsenal - yet chants of Bielsa's name continue to be echoed around the United terraces.

Bielsa has regularly applauded United's fans for their unwavering support of the team and has now reflected on the backing for himself personally, something which has evoked two particular memories from his spells in charge at Argentine first love club Newell's Old Boys and Spanish outfit Athletic Bilbao.

Asked about United's supporters still singing his name during tough times, whether he had experienced that before and how important that was, Bielsa pondered: "To be supported in adversity is very difficult, it's not common.

"There are some things that I am never going to forget.

"When I coached Newell's, after we were champions, for two thirds of the following tournament we were last and I felt the support for myself and the team from the Newell's fans.

"I remember a detail of this time.

"I remember, we used to pull out a name out of a hat to see who could go home for the night.

"And the last game I managed with Bilbao which was a friendly game, I had a view of a stadium when the lights were turned off because the spectacle had finished.

"It was already known that the directors had decided that I wouldn't continue and with the stadium without lights, in the dark but full, they sang for me to stay.

"As you guys know, I haven't had a lot of success in my career but there are some memories like these two which I make reference to, those that I hang on to realise that it was worth it."