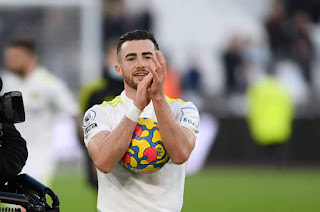 How much of a Marcelo Bielsa player was Samuel Saiz?

In Saiz’s favour are memories of the rampant midfielder who lit the charge in the weeks when Bielsaball descended on English football. But then there was the running session a few days after Bielsa walked in, with Saiz lagging far behind and Liam Cooper dropping back to drag him through the remaining laps. A couple of months in and Leeds United’s head coach had nudged Saiz to the bench. Was it ever made to last?

Whatever else Saiz was, he was homesick before Bielsa completed half a season in England and when he asked Leeds to let him go, Bielsa said yes with no questions asked. On that basis, Cody Drameh was unlikely to meet more resistance from Bielsa last week when he and his agent pushed to force through a loan move to Cardiff City. The obvious response was to tell Drameh that, all other factors aside, Leeds had no players. And once Adam Forshaw and Junior Firpo pulled muscles inside half an hour at West Ham on Sunday, they had fewer still. But as with Saiz three years ago, Bielsa had heard all he needed to hear.

In between Drameh and Bielsa was a clash of ideas about youth development and methods of managing the green shoots pushing through the soil at a club. Bielsa’s thinking was that regular training with the best of his players, a place in his matchday 20 and occasional appearances on the pitch were sufficient carrots for the typical under-23. The Premier League requires sensibility and patience. Drameh’s thinking was more old-school: that a loan in the Championship meant more regular games, and regular games were the building blocks for a career. In the crunch of discussions with Drameh’s agent last week, the different outlooks were incompatible.

Bielsa said he was not disappointed with Drameh, that he would not “condemn or criticise” the young right-back. But there was a tone of hurt in the many minutes he gave on Friday to explain why he preferred under-23s to be close to his squad, rather than off in the big wide world. There was a tone of hurt in the realisation that with certain players, his train of thought wasn’t shared. “Perhaps I overvalue the fact that you’re in a 20-man squad in the best league in the world,” he said and while the most contentious aspect of Drameh heading out was his insistence on going while Leeds were walking wounded, there was more to Bielsa’s rhetoric than that.

Academy progression at Leeds is a process of give and take. Debuts handed out by Bielsa ran into double figures in his first couple of seasons and have never dried up but his policy of keeping under-23s in-house, even those who are not involved frequently under him, is not the way at every club. Charlie Cresswell is a good example of how it works. Before the shoulder injury he suffered last month, Cresswell had played fewer than 550 minutes across first team and academy fixtures, the equivalent of six full games. He was not so vital that Bielsa was using him constantly but he was vital enough to be kept at arm’s length from the development league schedule. Drameh was not so different. Any under-23 who insists on playing as often as they can is probably best taking their toolbox elsewhere, which might be the conclusion Drameh drew last week.

But on the flip side of any inactivity is the culture, the education and the challenge of thriving under Bielsa, who referenced murderball on Friday and made it sound as if he classed the weekly bout of mayhem as the equivalent of playing in competitive games. His squad members are not shy in saying that murderball is physically harder. And it is clear enough that striking the right tune gets you a seat with the orchestra. No one can pretend that Bielsa’s current matchday squads are not a representation of how decimated his dressing room is but, as usual, there was no dash to the transfer market this month and no sign of him abandoning the academy either. Drameh would have been on the bench at West Ham on Sunday. In total, eight under-23s were. In Bielsa’s defence, no other Premier League club is inclined to roll out young professionals like this.

Pascal Struijk, in whom Bielsa has well-established faith, was back from injury and went straight in at centre-back. It might be that Struijk is simply better than Drameh or higher up the pecking order; or that they end up hitting a similar level regardless. But Struijk is a vindication of the slow burn at Leeds, the gradual creep which carries a footballer forward. His appearances have mounted and if he plays at home to Newcastle next weekend, it will be his 50th for Leeds. It took two and a half years after his transfer from Ajax for him to complete 90 minutes for Bielsa’s first team but he has started the car and left the academy behind. If anyone wants a blueprint to believe in, Struijk is one.

Likewise, Jack Harrison, who came to Leeds from Manchester City’s academy in 2018 and levelled up before everyone’s eyes, a 21-year-old to whom Bielsa pinned his colours without hesitation. His first career hat-trick took down West Ham spectacularly, with two bright finishes in the first half and a beautiful chip for his third goal on the hour, just as the home side thought the wind was finally blowing for them. Here was a winger who couldn’t get a start in a past life on loan at Middlesbrough, stealing thunder and moving to within two matches of his 150th Leeds outing.

For some younger players, the London Stadium offered extreme exposure for the second time in a week, a back-and-forward road rash from which Harrison’s goals prised a brilliant 3-2 victory. His opener was followed by a Jarrod Bowen equaliser, coming after Forshaw and Firpo limped off simultaneously: seven days on from making their debuts, Lewis Bate and Leo Hjelde were in the mix again. Harrison wrestled the lead back with a far-post finish before half-time and after Pablo Fornals drew West Ham level again, Harrison buried them with the best of his three strikes. From there Leeds fought like hell, protecting the result their season has been waiting for.

Luke Ayling was Struijk’s tag-team partner in the centre of defence throughout, the pair of them riding the chaos and sharing the fight with Bowen and Michail Antonio. In 2020, I asked Ayling about the academy at Leeds and the way Bielsa was using it. Ayling was nearing the age of 30 and was very grateful to have crossed paths with the Argentinian — but quietly envious too of wet-behind-the-ears team-mates who were being schooled by Bielsa in their teens.

“I’ve got so much energy for the young lads who are getting coached by him,” Ayling said. “To have him at 19 or 20… just imagine what they’re going to go on and do.”

There speaks one with a voice worth listening to.