Leeds United: The contract situation of every player as talks continue with Kalvin Phillips and Raphinha - Yorkshire Post 12/1/22 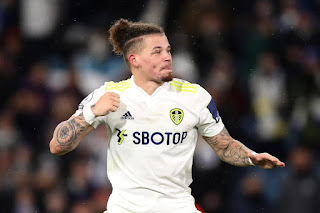 Leeds United are in a stronger position than most when it comes to the contract status of their senior squad.

Adam Forshaw is the only player in Marcelo Bielsa's side set to be out of contract this summer although reports have revealed how the club are confident of securing the midfielder's future by the end of the next week.

The former Brentford midfielder has produced a number of fine displays since returning from a long and frustrating injury lay-off.

"I'd love [to stay at Leeds]," he said in December when addressing his contract situation.

"My kids are in pre-school, we've loved it, I've never enjoyed living somewhere as much as I've enjoyed living here and I've had a torrid time on the pitch, so that says a lot about the people and the area and what I think of the place.

"I'm just enjoying playing again and see what the future holds. I hope [to stay], I don't know. It's not up to me. I just want to keep playing, stay in the team and help them climb up the table."

That would leave zero senior players without a deal come the end of the season while just four players will see their contracts expire in the summer of 2023.

The Whites are also reportedly in discussions with star players Kalvin Phillips and Raphinha about improving their deals at Elland Road.

Both players have been the subject of numerous transfer rumours but their contract situation does leave Leeds in the position to command a sizeable fee for their signatures if the decision is made for either player to leave Elland Road.

Below, is the contract status of every Leeds United player who has made a senior appearance for the club this season.

Adam Forshaw (2022) - The midfielder is in talks to sign a new deal at Elland Road but his current contract is up this summer.

Crysencio Summerville (2023) - The winger penned a three-year contract when he arrived at Elland Road in 2020.

Sam Greenwood (2023) - The forward signed a three-year deal when he joined Leeds from Arsenal in August 2020.

Liam McCarron (2023) - The youngster signed a new two-year deal at Leeds United in September, keeping him at Elland Road until the summer of 2023.

Kalvin Phillips (2024) - The midfield talisman is reportedly in discussions over a new deal at Elland Road. His current contract is up in the summer of 2024.

Raphinha (2024) - The Brazil international is another key Leeds United player reportedly in discussions over a new contract.

Diego Llorente (2024) - The defender joined the Whites on a four-year deal from Real Sociedad in the summer of 2024.

Robin Koch (2024) - The defender joined Leeds on a four-year deal from SC Freiburg for an undisclosed fee in 2020.

Rodrigo (2024) -The Spaniard joined the Whites from Valencia for a club-record £27m fee. His deal runs until the summer of 2024.

Pascal Struijk (2024) - In November 2020, the Dutch defender penned a new three-and-a-half-year deal at Elland Road, running until the summer of 2024.

Mateusz Klich (2024) - The Polish international agreed a new four-and-a-half-year contract with Leeds in the autumn of 2019.

Stuart Dallas (2024) - The 30-year-old, who is often hailed for his versatility, signed a new three-year deal with Leeds last summer.

Joe Gelhardt (2024) - The striker has burst onto the scene this year for Leeds after signing a four-year contract with the Whites in the summer of 2020.

Cody Drameh (2024) - The Whites signed the player on a four-year deal from Fulham in 2020. He is currently poised to go on loan to Championship side Cardiff City.

Illan Meslier (2026) - A new long-term contract for the goalkeeper was announced by the club last summer.