Showing posts from February, 2006
Show All
- February 25, 2006
The Match Live: United 2 Luton 1 leedsunited.com UNITED 2 LUTON 1 United boss Kevin Blackwell made just the one change to the side that drew 1-1 with Leicester City, a result that saw Blackwell unleash his wrath on the team for what had been a disappointing performance. Eirik Bakke was the man who missed out, dropping down to the bench after haing started his first game since August for the Whites at the Walkers Stadium, and David Healy, a substitute for the past three games, got a start. The game also marked the occasion of Gary Kelly's 500th game for the club Luton made two changes to their side and the biggest surprise was seeing former Leeds striker Warren Feeney only on the bench on his Elland Road return. The Match Leeds fell behind after just five minutes at the Walkers Stadium in last week's draw with Leicester and the same thing nearly happened at Elland Road when Luton spurned a golden opportunity to put themselves in front. Sean Gregan conceded a free-kick just i
Read more
- February 25, 2006 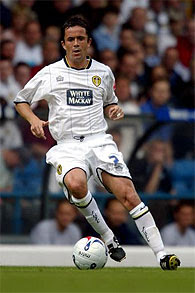 The Last Of His Kind leedsunited.com When Gary Kelly steps onto the Elland Road pitch to the appreciation of the crowd on the occasion of his 500th appearance for the club, it could well be the last time such an achievement is recognised. Nearly 15 years since he made his Leeds debut in a Rumbelows Cup tie against Scunthorpe at Elland Road in October, 1991, Kelly is set to become part of an elite list of ten players who have surpassed 500 appearances for United. The man from Drogheda joins the likes of Billy Bremner, Norman Hunter, Peter Lorimer and Jack Charlton in that list, the only non-Revie era player, and by the end of his current contract could surpass former mentor Eddie Gray's 577 appearances. The 31-year-old will receive a presentation from director Peter Lorimer on the pitch before tomorrow's game against Luton, but the player himself has shunned all media opportunities in the build up. It's simply not Gary's style to attract attention to himself before gam
Read more
- February 17, 2006 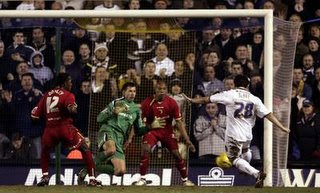 Leeds manager convinced Sheffield United can be caught Ian Appleyard Yorkshire Post LEEDS UNITED manager Kevin Blackwell is determined to keep the heat on his former club Sheffield United in the race for automatic promotion to the Premiership. Blackwell's side have returned to third spot in the Championship table courtesy of the 2-1 victory over Watford at Elland Road on Tuesday night and now sit just nine points behind second-placed Blades, who drew at home to leaders Reading. With Leeds having played a game less, Blackwell remains convinced that the Blades can be caught over the remaining 13 games of the season. He said: "It was an important win against Watford because we knew, if we are going to have any chance of getting automatic promotion, that we have to try and put the foot on the pedal and move forward. "The players all wanted to get back to third position because we've had it for such a long time and felt aggrieved when Watford took it off us. "Now we
Read more
- February 14, 2006 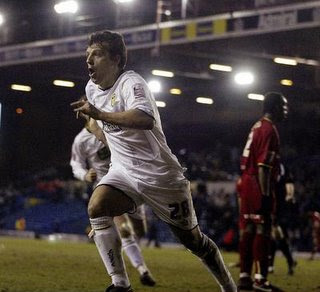 Leeds 2-1 Watford BBC Robbie Blake's double-strike sank nine-man Watford as Leeds leapfrogged the Hornets into third place. Ashley Young fired Watford ahead with a superb free-kick into the top corner. But Blake equalised from the spot when Hornets keeper Ben Foster was dismissed for fouling Rob Hulse after a poor back-header by Jordan Stewart. Things got worse for Watford soon after when Darius Henderson was sent off for clashing with Sean Gregan, before Blake grabbed the winner from close range. Watford came into the game in a rich vein of form, having won their last six games, scoring four goals in each of their three previous outings. But they found it more difficult to break down a determined Leeds side who were just two points behind them in the table at the start of play. And there was little goalmouth action until Young found the net from the edge of the area to put Watford in front on 40 minutes. Leeds responded well and Foster had to save well from Blake and Eddie Lewi
Read more
- February 11, 2006
All Square: Derby 0 United 0 leedsunited.com Leeds earned a point from a goalless draw at Pride Park but it wasn't a satisfying one for United as they had enough good chances to take all three. Pre-Match United boss Kevin Blackwell was forced to make changes to his forward line after injury and suspension hit his plans for this game. He knew last week David Healy would be unavailable after picking up his fifth booking of the season and an automatic one match suspension, but injury dealt his other striker from the last game against Queens Park Rangers a cruel blow. Richard Cresswell is understood to have gone down with a knee injury in training and was not even able to make it onto the subs bench. That meant a start for Rob Hulse and Richard Cresswell together, the only changes to the side from that win over Rangers. Worryingly both had been pre-match doubts earlier in the week. Derby tried and failed to sign a striker in time for the game as caretaker manager Terry Westley lo
Read more
- February 04, 2006 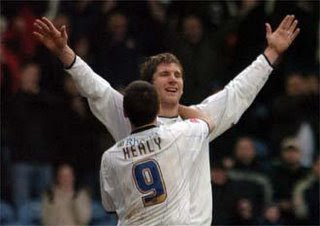 CARVER RELIEF AS LEEDS KEEP UP PRESSURE Sporting Life Head coach John Carver admitted Leeds had not produced a vintage performance but was relieved to have claimed a 2-0 win over QPR in the Coca-Cola Championship clash at Elland Road. Richard Cresswell and Paul Butler got the goals which keep the Yorkshire side in the chase for automatic promotion with 11 points separating them from second-placed Sheffield United, who play Watford on Monday night. "It wasn't pretty and it was a little bit scrappy," said Carver. "I thought we tried to play good football but took one pass too many at times. "Overall though, I'm delighted with the result." Kevin Blackwell's team registered their 10th home win of the season with a comfortable display against a committed Rangers side as they look to keep the pressure up on the Blades. Both sides showed plenty of desire but there was little quality on display until Cresswell's header broke the deadlock. Only Lewis,
Read more
- February 02, 2006 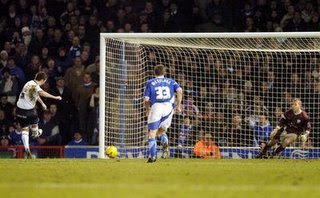 Healy's the hero in Leeds late show Bosses clash over spot-kick equalise By PAUL DEWS Yorkshire Evening Post RIVAL bosses Kevin Blackwell and Joe Royle were at odds after a hotly-disputed penalty salvaged Leeds United a point at Ipswich last night. Supersub David Healy converted an 88th-minute penalty to secure Leeds a 1-1 draw at Portman Road – but the managers were in dispute over the penalty decision that led to the equaliser. Ipswich defender Jason De Vos was adjudged to have handled under pressure from Leeds striker Rob Hulse, and Healy stepped up to spare United's blushes by bagging his 11th goal of the season. Blackwell said: "We called for a penalty straight away, and the referee gave it straight away. "I thought he handled, but I haven't seen it again so I'm not going to say for sure that Joe is wrong. "You keep telling defenders to keep their hands down. If you raise them in the box you know the possible consequences." But Ipswich boss Roy
Read more
More posts