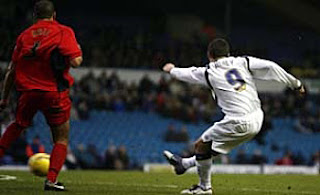 Times 2/1/07 Leeds still in trouble despite welcome win MATT DICKINSON Our columnist on Ken Bates’s battle to stop Yorkshire club sinking to a new low “Big win, that,” one man said to his friend as they hurried away from Elland Road yesterday, and a big win it was. They all are when you are in Leeds United’s dire straits. All you need to know about their predicament was summed up as Dennis Wise and Gustavo Poyet, manager and assistant, threatened to squeeze the life out of each other, so tight was their embrace at the final whistle. The cause of this delight was a 2-1 win over Coventry City, one achieved with no little anxiety and that still left Leeds second from bottom in the Coca-Cola Championship. It was a first victory in eight league matches. The outpouring of joy must be set against a grim context. Sensibly, Wise resisted any temptation to hail this win as a turning point in Leeds’s fortunes. Ken Bates, his boss, has been peddling hope to the Yorkshire public ever since he took
Read more
More posts