Showing posts from March, 2008
Show All
- March 29, 2008
Leedsunited.com 29/3/08 HELD AT HOME UNITED 0, BRIGHTON 0 As expected, Gary McAllister named an unchanged side from the one which accounted for Walsall last weekend. Brighton arrived on the back of a run that saw them two points clear of Leeds at kick-off, but it was the home side who threatened first when David Prutton saw a free-kick deflected to safety. Tempers also flared after just seven minutes when Neil Kilkenny and Therry Racon traded pushes in the middle of the park. United started brightly and came close to opening the scoring on 13 minutes. Dougie Freedman's shot from inside the box beat Brighton keeper Michel Kuipers, but Andrew Whing hacked it clear off the line. Jonny Howson was next to go close when he tried his luck from distance and Freedman stabbed a shot wide on 21 minutes after a good delivery from Bradley Johnson. United were enjoying a good spell and an unsighted Kuipers was relieved to see a Prutton shot fizz past the outside of the post. A heavy downpour mad
Read more
- March 24, 2008
Yorkshire Evening Post 24/3/08 Leeds United are Beck to their best By Phil Hay Leeds United 2 Walsall 0 DENNIS Wise's answer to criticism of Leeds United's performances was always the same. What logic, he would ask, could there possibly be in altering the approach of a team which was already adept at pulling in results. His dogmatic attitude to tactics this season was beyond reproach until January, and when it finally came into question Wise downed tools and left Elland Road. Gary McAllister might think of himself as a more cerebral student of football than his predecessor, but the lessons of Wise's incumbency still offer a valuable insight into how best to uncover United's potential. The squad at Leeds was, and is, at its most effective when playing to its strengths, a statement which is not quite as obvious as it sounds. Wise would have liked to have swept through League One with panache, and the pressure on him to attempt to do so was intense, but pushing his player
Read more
- March 23, 2008
Yorkshire Evening Post 22/3/08 Beckford at the double for Leeds United By Phil Hay Leeds United 2 Walsall 0 It sounded like a dubious prediction, but for one day at least it was as Gary McAllister had hoped. Leeds United's manager was honest enough to accept that the four points gained from three recent games against clubs in the lower reaches of League One was five points too few, but the admission was tempered by the insistence that a better standard of opposition would force his players to find themselves again. Lacking momentum after a draw with Port Vale and a defeat to Cheltenham Town, United's spirit was uncovered at Elland Road in exactly the way that McAllister anticipated. Their conclusive 2-0 victory over Walsall – a club in direct competition with Leeds for inclusion in the play-offs – served the notice of intent that United's manager has waited to patiently to send forth from Elland Road, at the very moment it needed to be sent. Yesterday's match was the fi
Read more
- March 16, 2008 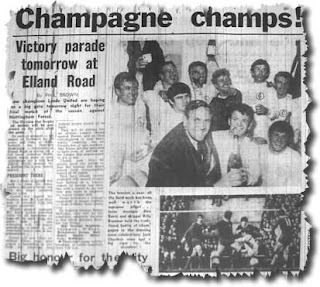 New pages uploaded at mightyleeds.co.uk Matches – 28 April 1969 – Liverpool 0 Leeds United 0 It had been eight years in the making but finally championship glory was awaiting United ... a point at Anfield, home of second placed Liverpol would be enough to secure a first championship Read the full story at http://www.mightyleeds.co.uk/matches/19690428.htm
Read more
- March 16, 2008
Yorkshire Evening Post 15/3/08 Rodgers rides in to thwart Leeds United By Phil Hay Port Vale 3 Leeds United 3 LUKE Rodgers' goal in the third minute of injury-time stole a priceless victory from Leeds United's grasp and strengthened Gary McAllister's belief that his club's sprint towards the play-offs will end in a photo finish. Rodgers scored with the final kick of a fickle game at Vale Park which offered hope to Leeds with four minutes remaining but snatched it away when the points seemed to have been won.A strike from Dougie Freedman – his second of the game – re-established United's advantage in the 86th minute after the visitors had allowed a 2-0 lead to evaporate but, with the points on their plate, Rodgers' intervention brought a frustrating end to a week which promised more than it delivered. McAllister had hoped to emerge "unscathed" from successive matches at home to Bournemouth and Cheltenham and yesterday's visit to Port Vale which, in
Read more
- March 08, 2008 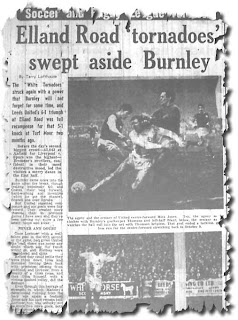 New pages uploaded at mightyleeds.co.uk Matches – 21 December 1968 – Leeds United 6 Burnley 1 Leeds United's professional pride had been stung badly by their hiding at Burnley and they were intent on revenge when the Turf Moor club visited Elland Road just before Christmas Read the full story at http://www.mightyleeds.co.uk/matches/19681221.htm
Read more
- March 03, 2008 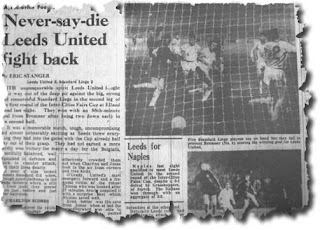 New pages uploaded at mightyleeds.co.uk Matches – 23 October 1968 – Leeds United 3 Standard Liege 2 It looked an easy enough task but Standard Liege gave United a real fright at Elland Road after a goalless draw in Belgium - with two minutes to go Leeds were on the way out Read the full story at http://www.mightyleeds.co.uk/matches/19681023.htm
Read more
- March 02, 2008 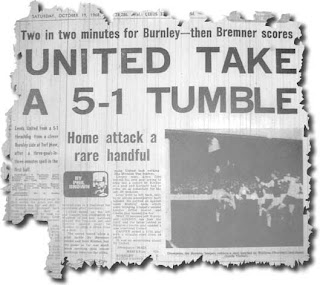 New pages uploaded at mightyleeds.co.uk Matches – 19 October 1968 – Burnley 5 Leeds 1 They might have been leading the First Division table, but when United took on a youthful Burnley side they definitely had an afternoon to forget Read the full story at http://www.mightyleeds.co.uk/matches/19681019.htm
Read more
- March 01, 2008
Leedsunited.com 1/3/08 THAT WINNING FEELING! SWINDON 0, UNITED 1 United boss Gary McAllister welcomed Neil Kilkenny back to his midfield and Bradley Johnson returned to the left flank with Peter Sweeney missing out. Worryingly, new loan signing Steve O'Halloran, who was named in the original starting line-up, limped out of the warm-up 20 minutes before kick-off, leaving the boss with a late dilemma. Fellow left-back Alan Sheehan, who wasn't named in the squad, emerged from the tunnel to join the warm-up. That prompted a late change to the Leeds team with Frazer Richardson stepping into the starting line-up, and Sheehan being added to the subs bench. It was an untidy opening to the contest - United kicked-off playing into the wind - and it was Swindon who had the first opportunity when Lee Peacock lashed a shot over the top. Jermaine Beckford also put one over the top from close range on 10 minutes after a David Prutton free-kick. Swindon suffered an early injury blow themselve
Read more
More posts