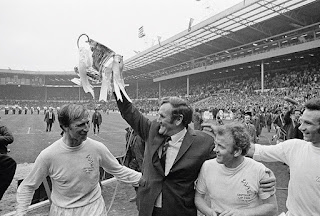 Historically speaking, Leeds really isn’t much of a football city. This might sound counter-intuitive, but for much of the 20th century rugby league was its sport of choice. Leeds Rhinos can trace their origins back to the 1870s; Leeds United was only founded in 1919, and the club has spent much of the intervening period mired in mediocrity: bobbing between the top two divisions, struggling to fill its stadium, occasionally flirting with extinction.

Twenty-four clubs have spent more seasons in the English top flight; ten clubs have won more league titles; 23 have won more FA Cups. Meanwhile, almost all of Leeds’s tangible success came in a white-hot streak between 1968 and 1974 that brought six major trophies. The other 96 years of its existence have brought one. And so when people speak of Leeds as a giant of English football, what they are really referring to is one fleeting era of dominance. They mean the Leeds of Don Revie.

When Revie took over in 1961, Leeds were a struggling Second Division team with no money, few devoted fans and no pedigree to speak of. Within eight years of his departure in 1974, Leeds were back in the Second Division, restored to their natural state of mediocrity. By rights, his biographer Christopher Evans contends, Revie should be remembered alongside men such as Bill Shankly, Matt Busby and Alex Ferguson as one of English football’s greatest ever managers.

And yet to many he will be remembered as a mercenary, a cynic, perhaps even a cheat. His early Leeds sides were brutal, physical and often negative. Unproven but persistent accusations of fixing and financial irregularity continue to tarnish his reputation. His unhappy three-year tenure as England manager between 1974 and 1977 ended with Revie resigning to take a lucrative job in the United Arab Emirates, a betrayal for which he was never really forgiven.

Evans, the Labour Co-operative MP for Islwyn, in south-east Wales, sets out to redress the balance. His book is impeccably researched, based on dozens of new interviews, and attempts to recast Revie as a visionary, a trend-setter, the ultimate professional who reinvented the game for the modern age. Players such as Billy Bremner, Peter Lorimer and Norman Hunter were plucked from obscurity and transformed into world-beaters. Scouting was taken to a new level, with opponents analysed in painstaking detail and thick dossiers issued to players. Time-wasting, gamesmanship, rough-house tactics: virtually nothing was off-limits in pursuit of a competitive edge. In one game against Leipzig, played on a treacherously icy pitch, Revie ordered his players to file down their studs to expose the nails underneath, giving them a better grip. Before long, the shins of the outraged Leipzig players were dripping with blood.

Underpinning all this was Revie himself: a proud, driven, superstitious and avaricious man whose footballing credo essentially derived from fear. Born into poverty in Depression-era Middlesbrough to an unemployed joiner, that haunting sense of insecurity and mistrust never really left him. Defeat was death. Ruin lay around every corner. Revie lived like a man who could feel the breath of poverty on the back of his neck. As a life and times, Evans’s account is immaculate. What it lacks – in comparison to books such as The Unforgiven (2003) by Rob Bagchi and Paul Rogerson, another history of Revie’s tenure at Leeds – is wider context, the sense of romance and fierce fragility that the club under Revie embodied, how he changed the city and the game around him.

Revie died from motor neurone disease in 1989, revered in Leeds but nowhere else. After a brief flurry of success under David O’Leary around the turn of the century, the club sank to its lowest ebb: relegated in 2004 and again in 2007 after going into administration. A conveyor belt of hapless owners oversaw a conveyor belt of hapless managers. Attendances at Elland Road sank to about half what they were in the Premier League. The soul of Leeds United was in the gutter, and it took a mercurial Argentinian named Marcelo Bielsa to restore it.

When Leeds first approached Bielsa in 2018, he arrived armed with detailed research on all the club’s Championship rivals, lists of the players he wanted to sell and keep, and Land Registry drawings of the club’s training complex, annotated with improvements that had to be made as a condition of his appointment. This was Bielsa in microcosm: a manager whose fascination with football often veered into obsession, even absurdity; one who inspired an almost religious devotion among players, fans and fellow coaches, but hadn’t won a club trophy in more than 20 years.

For Bielsa, football is something to be lived completely or not at all. No compromises. No shortcuts. Players who displease him or who fail to meet his exacting physical standards were jettisoned without remorse. Training games unfold at bone-shattering speed. This is why his teams play with a stirring, hyperactive intensity, ripping sides apart with beautiful high-wire football. It is also why he had never previously spent more than two years at any club.

Like Revie, he studies opponents in ridiculous detail and compiles extensive dossiers on every player and situation. Unlike Revie, he does not share them with his players. They are for his consumption alone: a form of penance, something to help him sleep at night. “It allows me to keep my anxiety low,” he says in Phil Hay’s And It Was Beautiful. “Why do I do it? Because I’m stupid.”

Bielsa isn’t stupid. But nor is he the wizened sage or philosopher-king that so many of his posturing disciples think he is. Raised in an upper-middle class family of politicians and lawyers in Rosario, Bielsa has encountered enough real intellectuals to know that he’s not one of them. And yet such is the solipsism and self-seriousness of the modern game that footballing genius is often confused for the real thing. (Arsène Wenger, too, was a subject of the fallacy that coaching football and sounding gnomic in press conferences qualifies you as a public intellectual.)

Perhaps Bielsa and Leeds saw a little of themselves in each other: tortured, misunderstood but nonetheless convinced that grace is at hand. In Bielsa’s first season, Leeds narrowly miss promotion. In his second, they return to the top tier for the first time in 16 years. His third season is covered in And It Was Beautiful: part footballing chronicle, part enthralling character study, part reflection on what football means to a place.

Now at the Athletic after 15 years covering Leeds for the Yorkshire Evening Post, Hay has long been known as one of the best-informed local correspondents in the country. Here, he blends excellent reportage with a keen eye for detail and deeper thoughts on Bielsa and the city that embraces him with unfettered love. Murals spring up around the city. Fans glimpse him in the coffee shops and supermarkets of Wetherby. Though he is a private man, Bielsa is always generous with his time, aware that football is played not for sponsors or owners or television executives, but for the people. One of his first moves is to make Leeds players pick litter for three hours, because that’s how long the average fan has to work to buy a ticket.

Of course, there’s a natural dissonance here. Bielsa earns a handsome salary (much of which he gives away), but makes even more money for others. The Italian media mogul Andrea Radrizzani bought Leeds in 2017 for £45m and now wants to turn it into a £1bn asset. Bielsa’s face is used to sell season tickets, satellite packages, even Hay’s book. Replicas of the blue bucket upon which he sits to watch Leeds matches have been sold in the club shop at £80 a pop. While extolling football’s idealism and purity, Bielsa helps to sustain the very system and structures he detests.

Revie understood this dichotomy perfectly. One of the most poignant moments in Evans’s book is in about 1963, when Revie takes his son Duncan out onto the Elland Road pitch and explains his vision. “One day, son, there’ll be boxes there,” he says, pointing across the weathered terraces. “There’ll be people coming for lunch at 12, not five to three. There’ll be sponsorship on the shirts. There’ll be television worldwide. It will be a complete revolution.” If Bielsa sees football as it can be – its beauty, its purity, its possibility – then Revie saw it as it really was. The irony is that in a way, both were men out of their time.

And It Was Beautiful