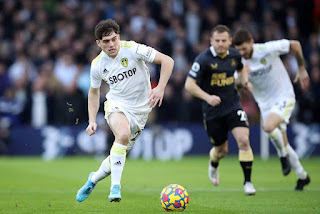 The No 9 jersey, metaphorically speaking, passed from Dan James to Tyler Roberts and then, in a matter of nine minutes, from Roberts to Joe Gelhardt. As the cogs shifted to accommodate Gelhardt for what was left of Saturday’s defeat by Newcastle United, it was natural to long for the day when that position picked itself.

Leeds United needed a finisher against Newcastle, a centre-forward with the capacity to make Eddie Howe’s defence feel as porous as it was for the length of the first half, and so the talk turned to Patrick Bamford afterwards. When a team doesn’t score, Marcelo Bielsa reflected, the easiest reaction is to talk hypothetically about a striker who wasn’t on the pitch. Human nature assumes that Bamford would have found a way because no one at Leeds is more likely to than him.

That debate is one of poaching, anticipation and a feel for the role. Since the sale of Kemar Roofe to Anderlecht in 2019, Bamford has been the forward who best suits the team Bielsa has built. But there is a second aspect to Bamford’s absence too, something highlighted by James starting as a No 9, Roberts stepping in and Gelhardt finishing Saturday’s defeat as the third try up front. Who is the chosen understudy for Bamford in the hierarchy at Leeds? Do the club actually have one?

As much as the sheer number of injuries, Bielsa has been frustrated by how those absentees have been concentrated in specific positions.

One of the annoyances for Bielsa in the face of so many injuries this season has been the way in which some of them have concentrated in specific positions. When he got down to picking a forward for Leeds’ FA Cup defeat at West Ham United this month, Sam Greenwood was the only one left. The rest of Bielsa’s stock was missing. Greenwood promptly damaged a knee so when the club contested a Premier League game at the same ground a week later, Bielsa used James to lead the line. It was not a new take on Bielsa’s part. In his seventh game as Leeds’ head coach, at Millwall back in 2018, Jack Harrison was the winger filling in as a centre-forward. Very few players are pigeon-holed by Bielsa.

On Saturday, the attacking resources were nowhere near as scarce. Bielsa had Rodrigo fit to start and Roberts and Gelhardt on the bench. From the realistic options, however, the player who started up front, James, was the least likely to describe himself as a No 9. In Spain, Rodrigo was categorised as a No 9 but Bielsa seems to see him as a 10, preferring him in a more withdrawn zone. Roberts is in that unenviable position where shoulders slump in the stands around him when he appears, a footballer losing the battle for hearts and minds, ploughing a sorry furrow. Gelhardt is on Bielsa’s graduate scheme, not yet wholly off the leash.

It made the point that Leeds are without an established, head-to-head pair up front. On reflection, they have been without a head-to-head pair since Roofe and Bamford were together at Elland Road, or certainly since Eddie Nketiah passed through. Jean-Kevin Augustin came with a big reputation but left looking like a busted flush. Bamford had been durable enough to make it unnecessary to sign cover for him but this season has been different. It is not a case of Bamford or bust at Leeds but it is hard to deny that coping without him feels like a makeshift exercise.

Injuries have kept him far from view. Leeds are 21 league games in and have had five starts from Bamford, a total of 459 minutes. It was an ankle knock at Newcastle in September, a hamstring pull against Brentford in December, a problem affecting his hip before the FA Cup tie at West Ham and now an issue with the sole of one foot.

The break Leeds have before their next match at Aston Villa on February 9 should have been a chance to get Bamford up and running again but Bielsa is not convinced that Bamford will make that game. “I’ve had my doubts,” Bielsa said on Saturday. “With a player who’s gone so long without playing, it opens up a question mark after he is healthy about how long he needs to show consistency.”

Bamford’s stats for the season are interesting and there is an argument to be had over whether they say more about him and his influence on the team or more about the way Leeds have been grasping for form. Six appearances have been sufficient to allow him to rank as the club’s joint third-highest goalscorer, with two. There is no one in the squad at Leeds, not even Raphinha, with more Premier League assists than Bamford’s pair. His individual expected goals calculation (2.52) is also the club’s third-highest, behind Raphinha (5.36) and James (4.12). James, evidently, poses an attacking threat but he is demonstrably a winger, more so when defenders keep his back to goal, and neither his game nor his physique is made for doing what Bamford does.

Bamford’s last 90 minutes, against Newcastle at St James’ Park four months ago, was a typical Bamford performance, with regular touches in Newcastle’s half of the pitch (below) painting him as an active and effective outlet. What Bamford does well is combine regular finishing and creative play with variation and a range of positioning that allows Leeds to start and build attacks. Much of the work Bamford gets through serves the purpose of providing good possession for Raphinha, James and Jack Harrison. They, in turn, try to exploit wide areas.

James’ contribution on Saturday was far more limited and most of the possession he saw came inside Newcastle’s box (first graphic, below). In the 26 minutes he was on the pitch in the second half (second graphic), his involvement on the ball ground to a virtual halt. He was more effective in Leeds’ 3-2 league win at West Ham, an easier target for Bielsa’s other players to pick out, but his opportunities at centre-forward tend to harden the view that the Wales international is most dangerous running at pace on the flanks. The irony of his substitution on Saturday was that at the point where he made way for Roberts, the right-hand side of Newcastle’s team had begun to fall apart physically. Cramp in the legs of Ryan Fraser was something James could have punished. 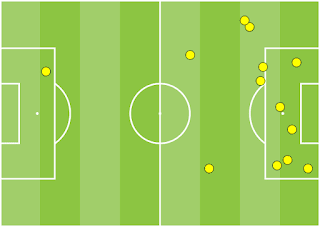 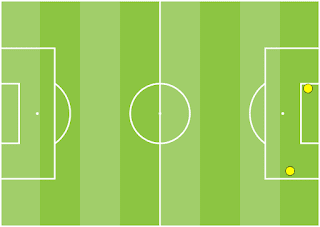 There is a regularity to Bamford’s play and regularity to Leeds’ organisation with him in their team, a focal point around which everything flows nicely around. If absence generates fondness then Bamford’s injuries have demonstrated how perfectly he works for Bielsa and how difficult it is for Bielsa to shore up Bamford’s position without him.

Logic says that as time goes on, Gelhardt will elevate himself further. The switch of direction in the box, the darts to the near post — he has those tricks figured out. He simply has little control over when and how his opportunities come. Bielsa has a high opinion of Roberts but Elland Road is palpably down on him and Roberts, after more than 100 appearances, can never quite fire or lift-off in anything more than occasional spurts. Rodrigo, for all his history, does not look like getting a run up front. The No 9 shirt is a moveable feast.

For all that, the arrival of a new centre-forward was never on the agenda for Bielsa this month and that stance is unlikely to change after Saturday’s loss to Newcastle. A returning Bamford would do Leeds good but Bamford remains in the background, trying to get himself to the point where, after 43 goals in three seasons with Leeds, he can make something meaningful of this one. Even allowing for Kalvin Phillips’s excellence, there is probably no injured player Leeds need more.