Showing posts from April, 2010
Show All
- April 26, 2010
Yorkshire Post 24/4/10 Leeds United 4 MK Dons 1: Becchio, Gradel and Beckford on target for Whites By Richard Sutcliffe at Elland Road AT the end of a week when the Billy Bremner statue that proudly sits outside Elland Road were given a timely makeover, Leeds United's own promotion hopes benefited from a much-needed polish. The tribute to United's greatest captain had been in need of a good sprucing up for some time with Mother Nature having washed away much of its initial colour and vibrancy. A similar thing could have been said on Saturday morning about Bremner's former club following a largely disappointing 2010 that has seen what once appeared to be an unassailable lead at the top of League One gradually eroded away. Come 5pm, however, Leeds' hopes of escaping the third tier had, just like the statue outside the stadium, taken on an altogether healthier glow thanks to the manner in which managerless Milton Keynes Dons had been dispatched in comprehensive style. Th
Read more
- April 24, 2010

New pages uploaded at mightyleeds.co.uk History of the Club – The organising of the game The Victorians bring form and order to the British game. Read the full story at http://www.mightyleeds.co.uk/history/earlyyeears.htm History of the Club – Origins of football How the game began and was introduced to and popularised in Britain. Read the full story at http://www.mightyleeds.co.uk/history/origins.htm Players – Dickie Morris (1905-06) – City’s first international Welsh inside-forward who was the first Leeds City player to win international honours while on the Elland Road club's books - he made a valuable contribution to their early days. Read the full story at http://www.mightyleeds.co.uk/players/dmorris.htm Players – Fred Parnell (1905-08) – Dashing and dapper The dashing and skilful winger was one of the stars in the Leeds City ranks as they navigated their way through the club's first few seasons - first man to notch 100 League appearances for City
Read more
- April 24, 2010
Telegraph 24/4/10 Leeds United 4 MK Dons 1: match report By Will Swanson at Elland Road Leeds United are counting down the games. The vagaries of the end-of-season encounters have seen them miraculously emerge from their desperate turn-of-the-year run occupying the second automatic promotion spot and with their fate in their own hands. With out-of-favour marksman Jermaine Beckford again only making the bench, Simon Grayson once more put his faith in the twin strike-force of Luciano Becchio and Max Gradel. They didn’t disappoint. Both found the net in a comfortable win against an injury-ravaged MK Dons reduced to eight men by the final whistle. It was a victory that saw Grayson’s men take another confident step towards the Championship. In an Elland Road bathed in warm afternoon sunshine, Leeds started brightly and were ahead with quarter of an hour. Defender Mathias Dombe was dispossessed in midfield allowing on-loan Arsenal winger Sanchez Watt to power down the left. He slipped the
Read more
- April 18, 2010 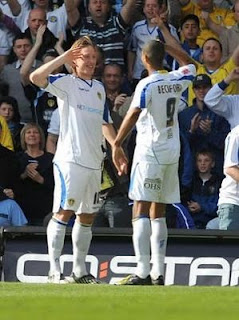 Bradford Telegraph and Argus 18/4/10 Grayson’s men grateful to still be second as rivals also slip Gillingham 3, Leeds United 2 Leeds manager Simon Grayson described his side’s first-half performance at Priestfield as “a shambles and hugely disappointing”. United remain in second place but after three successive wins they were cut down to size by Gillingham, whose victory aided their quest for League One survival. Huddersfield’s win over third-placed Millwall on Friday night had offered Leeds a huge boost but Grayson’s men failed to take advantage. Fortunately for United, Swindon drew at home to Walsall and Charlton lost to promoted Norwich, leaving the Whites still a point ahead of Millwall in second place. Grayson said: “You can’t give teams a three-goal start and expect to win. We gave ourselves a lifeline with a goal just before half-time but we made too many bad decisions and didn’t compete enough. “I said to the lads beforehand that this would be the most difficult of our remai
Read more
- April 15, 2010
Yorkshire Evening Post 13/4/10 Whites reveal financial results By Phil Hay Leeds United have announced an operating loss of £1.6m for the last financial year, with player sales allowing the club to post a slim overall profit of £15,000. United's accounts for the 12 months to June 30, 2009 reveal a huge drop in overall profit from the £4.5m made by the League One side in the previous financial year. Leeds' results for the 14 months prior to July 2008 suggested their finances were in rude health after their exit from administration in the summer of 2007, but the latest set of accounts from Elland Road – published by Companies House yesterday – make for more worrying reading. The club's operating loss of £1.6m compares with an operating profit of £902,000 in the 14 months prior to July 2008, and their overall profit has also fallen dramatically. Player trading generating income of more than £1.6m wiped out the operating loss and ensured the club recorded a minimal bottom-line
Read more
- April 14, 2010 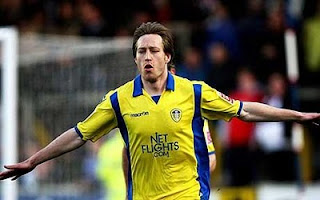 BBC 14/4/10 Jermaine Beckford in Simon Grayson's plans for Leeds Leeds United manager Simon Grayson insists Jermaine Beckford still has a big part to play for the club. The side's top-scorer was dropped for the first time in three years for Tuesday's win at Carlisle after failing to score in his last five matches. Grayson told BBC Radio Leeds: "It's a big decision to leave your leading goalscorer out - he's been fantastic. "After the last few games his confidence is probably a little bit low and we're there to make that decision." Beckford has already scored 27 goals this season but was booed by sections of the home crowd during Saturday's win over Southend at Elland Road. The 26-year-old was replaced for Tuesday's game at Brunton Park with Luciano Becchio partnering Max Gradel - a decision Grayson felt was justified, with both strikers scoring in the 3-1 win. "Luciano affected the game on Saturday and that's why we went for it t
Read more
- April 11, 2010 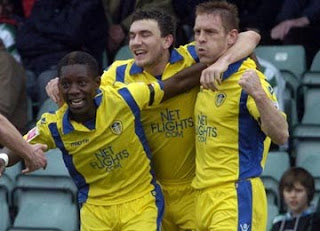 The Scratching Shed 11/4/10 Gradel the difference again as Leeds triumph over Southend Leeds United recorded their first back-to-back wins of the year with a 2-0 home win over struggling Southend. In a game the Whites dominated, Leeds also recorded their first clean sheet since the 2-0 victory over Oldham back in February. The game is unlikely to be remembered for another match-winning performance from Gradel and an improved Leeds United side unfortunately, as the headlines will undoubtedly focus on the fans continued criticism of Beckford. After failing to challenge the keeper for the ball, Beckford was booed by the fans and subjected to a chorus of ‘You’re not fit to wear the shirt’ before the Leeds fans sang for Luciano Becchio. There’s no denying Beckford’s loss of form lately, but the fans reaction was completely out of order. There’s plenty of other players in the squad who have given inadequate performances and escaped being singled out because the fans know this squad is heavi
Read more
- April 06, 2010 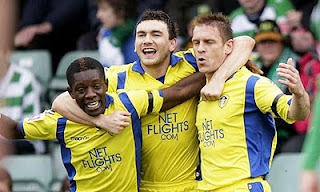 BBC 6/4/10 United boss Simon Grayson targets automatic promotion Leeds United manager Simon Grayson believes the Whites can still win automatic promotion from League One. Monday's 2-1 victory at Yeovil means United remain fourth in the table with six games remaining. Grayson told BBC Radio Leeds: "We've got a group of players that can quite easily go and win seven on the trot. "We've won one today, we're not getting carried away with it but we know we've got a group of fixtures coming up that we can go and win." Captain Richard Naylor scored twice at Huish Park to end a run of four successive defeats and reignite hopes of finishing in the top two. It remains tight at the top of the table, and with all the other teams around them also winning on Monday, Leeds are still two points behind second-placed Swindon Town. "Today we had a belief and desire to put things right," said Grayson. "The players are wounded at times
Read more
More posts