Get in there...
Read more
- May 22, 2005
Leeds United Football Club - Healy Sets His Sights United striker David Healy hopes his performances in front of goal this season was just a taste of what's to come from him next season. Despite arriving partway through the season, playing some of it in an unfamiliar wide role and missing the final four games of the season through injury, the Northern Ireland international still finished up the club's top scorer with seven goals. With five more goals scored for Preston before his move and a few more for his country, David insists it has been an average season for him but predicts better things next campaign. "There have been so many missed chances this season," said David. "If we had taken half of them we would probably have finised six or seven places higher up the league. I could have got a lot more goals and that's obviously something I will want to put right next season. "I don't know about setting a target for next season j
Read more
- May 16, 2005

Blackwell: "We were third favourites to go down"
Read more
- May 16, 2005
Leeds United Football Club - Blackie Here For The Long Haul Kevin Blackwell may have just come through his first full season in the job but he's already set his sights on holding the reins at Elland Road for a long, long time yet. The year Blackwell has spent at Elland Road makes him the club's longest serving manager in the last three years, having seen Terry Venables, Peter Reid and Eddie Gray all last a very short time Reflecting on last season, he believes he has experienced many more problems than most managers would. Said Blackwell:"There were so many thing that went on that people said would stand me in good stead for my career, but the truth is I did not really want to experience some of the things that went on this year. "I did have a blast at certain people because I felt that if things did not chance quickly we would find ourselves where Nottingham Forest are today. I was very aggressive and maybe a little bit obnoxious towards certai
Read more
- May 11, 2005

KB ... man in a hurry
Read more
- May 11, 2005
Leeds United Football Club - Time Is Of The Essence Kevin Blackwell's summer recruiting drive is set to gather pace with the United boss hoping to add more new faces to the squad in the next few weeks. Blackwell has already turned striker Rob Hulse's loan spell into a permanent move and he has been busy this week talking to players on his hit list. Preparations for the new season actually began last season with Chairman Ken Bates giving Blackwell the go ahead to sign Ian Moore on transfer deadline day rather than risk him being tempted elsewhere in the summer, and the framework for Hulse to make his move was agreed. Aside from those two, Blackwell and his coaching staff were busy watching players at home and abroad to help prepare his list of transfer targets. Now he's ready to make his move on them. "We are very close on a few and hopefully it will be a case of weeks and not months,"said Blackwell. "We identified the players we were after very
Read more
- May 10, 2005 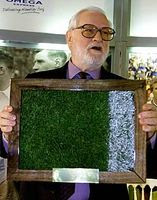 White dopes on grass...
Read more
- May 10, 2005
Guardian Unlimited Football | News | Godfather Bates not cross with Blackwell Godfather Bates not cross with Blackwell Matt Scott and Daniel Taylor Tuesday May 10, 2005 The Guardian Ken Bates last night dismissed talk linking Dennis Wise with Leeds as "totally unfounded". The former Chelsea captain quit as Millwall manager on Sunday, adding to rumours that he would join Bates, his former chairman and godfather of one of his children, as manager at Elland Road. The Leeds chairman gave a terse response to such suggestions. "It is unfair to put a question aimed at fuelling speculation that is totally unfounded," snapped Bates, who is highly appreciative of Kevin Blackwell after he steered the club to a respectable 14th place in the Championship in a season in which he started with only one player under contract. "We had a long chat after the game [0-0 against relegated Rotherham] and talked about where we need to be next season and how we get the
Read more
- May 09, 2005

Nice player ... shame about the stripes...
Read more
- May 09, 2005
Leeds United Football Club - Hulse Completes United Move Leeds United have today completed the signing of striker Rob Hulse from West Bromwich Albion for a fee that could rise to £1.1m dependant on future success. The 25-year-old was delighted to commit himself to the club for the next three seasons by signing until the summer of 2008. Hulse spent the past three months on loan at Elland Road from the Hawthorns, scoring six times in 13 appearances and his experience has left him in no doubt it's where he wants to be. "I am pleased we've got something sorted now," said Rob. "I have had a brilliant couple of months here and it was just nice to get back into playing again at a fantastic football club. I feel very much at home here now. "I am looking forward to the challenge next year and I think we have got a hell of a chance of promotion. "Who does not want to play in front of 30,000 every week and have those great fans behind
Read more
- May 08, 2005

Radebe ends with the skipper's armband
Read more
- May 08, 2005
Leeds United Football Club - Matchreport Leeds United vs Rotherham United Leeds 0 Rotherham 0 Pre-match Leeds made four changes to the side for the final game of the season. Clarke Carlisle went down the night before with illness whilst Gylfi Einarsson failed a fitness test just an hour before kick-off. Kevin Blackwell also brought Aaron Lennon back into the team and Jermaine Wright into midfield and Marlon King started on the right wing. Frazer Richardson was dropped to the bench, whilst skipper Paul Butler also made an appearance there, his first time back in the squad following the infamous collision with Neil Sullivan during the Sheffield United game. Young midfielder Gavin Rothery was also given his first appearance on the bench. There was space amongst the replacements for Lucas Radebe, the legend who would come on later to make his 200th and final league appearance for the club. The Match Within 30 seconds Ron Hulse had tested Rotherham keeper Mike Pollitt, going on
Read more
- May 07, 2005

Come on down you Zulu Warrior, Come on down you ZULU CHIEF ... CHIEF ... CHIEF
Read more
- May 07, 2005
Leeds United Football Club - Final Hurrah For The Chief Lucas Radebe will call time on his playing career with one final appearance for Leeds on Sunday, but hopefully not his involvement with the club. Radebe is expected to feature on the bench against Rotherham and come on for the last few minutes to achieve his 200th league appearance, bringing to an end a career which has seen him captain club and country with distinction. Ten years at Elland Road have seen him emerge as one of the most popular players in decades, as 38,000 turning up to support his testimonial showed, and despite his career having been ravaged by serious injury. Offers of coaching work have already been flooding in for the 36-year-old, but he wants to move into that new field with qualifications already under his belt, and that means attaining his UEFA A and B coaching badges first. Radebe is in no rush to return to South Africa just yet and hopes he can do much of his learning under United manage
Read more
- May 07, 2005 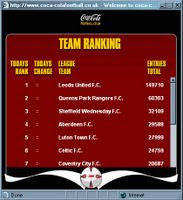 At least we're top of something ... Come on, you LEEEEDS!!
Read more
- May 07, 2005
Leeds United Football Club - United Fans Still Tops United Fans Still Tops Leeds fans continue to lead the way in the Coca-Cola 'Win A Player For Your Club' competition with nearly 150,000 votes cast! The United faithful have done the club proud once again and have developed a massive lead in the competition, which at the last count was nearly triple the number of votes second placed QPR have managed. But let's make sure we can hold onto a lead by getting as many people as possible to vote (you can vote every day if you wish). With still over a fortnight left to vote, let's go for the 250,000 mark to give us the best chance ever of winning the £250,000 prize towards a new signing! The lucky winning fan and club will be announced live on Sky Sports during the Coca-Cola Championship PLAY OFF FINAL, held at the Millennium Stadium, on 30th May 2005.
Read more
- May 05, 2005

Spring ... SPRUNG?
Read more
- May 05, 2005
Leeds United Football Club - Blackwell's Spring Warning Kevin Blackwell has told Matthew Spring he needs to impress him in every game to ensure he has a long term future at the club. Spring has been given an opportunity to do just that in the first team following Sean Derry's suspension and the decision to withdraw Seth Johnson for contractual reasons. The player had remarked that he doesn't believe he has been given a fair chance to establish himself in the squad this term after recovering from a series of early season injuries that set him back. Signed on a free-transfer from League One side Luton last summer, Spring is keen to prove to Blackwell that he can handle to step up to the Championship and the Whites boss will be happy if he does just that. "Matthew was injured more than he was fit this season, so he has to bear that in mind," said Blackwell. "I make it quite clear to Matthew Spring and any other player at this football club that they
Read more
- May 03, 2005 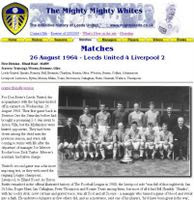 A memorable day for the Whites against the Reds...
Read more
- May 03, 2005
NEW PAGE AT MIGHTY LEEDS WEBSITE There's a new page on the Mighty Leeds website - http://www.mightyleeds.co.uk/matches/19640826.htm - featuring United's 4-2 win against reigning champions, Bill Shankly's Liverpool at the start of the momentous 1964-65 season.
Read more
More posts