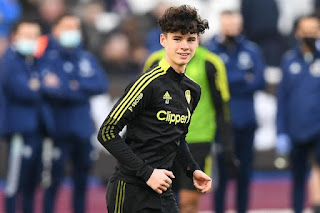 Marcelo Bielsa says Archie Gray's inclusion in Premier League squads has been 'premature' but believes the 15-year-old will become an elite player.

The youngster, whose great uncle Eddie, grandfather Frank and father Andy form Elland Road's Gray dynasty, was among Bielsa's substitutes for the games against Arsenal and West Ham United.

But according to the Whites head coach that was not an ideal situation. Leeds have suffered extensively with injuries this season, missing several senior players at once. The latest spate has robbed Bielsa of Kalvin Phillips, Jamie Shackleton, Liam Cooper, Patrick Bamford, Adam Forshaw, Sam Greenwood and Junior Firpo ahead of a crucial game against relegation-threatened Newcastle United.

Against that backdrop, Gray has found himself part of the first team group with his 16th birthday still almost two months away.

"What has happened to him has been premature," said Bielsa.

"I don’t think it’s good for a player of his age to occupy the space that he has, and have these opportunities. If I could have avoided it, I would have done it. The players, we have to put them in positions where they can assume the problems or possibilities that arise, and obviously Gray is not prepared to compete in the Premier League. "

Whilst Gray should not have had to take a place on the bench, his place was earned by merit, in the circumstances. The midfielder has impressed having been promoted to Mark Jackson's Under 23s, making eight appearances in Premier League 2 action and holding his own against vastly experienced operators like Lewis Baker. He was the best option for that spot on the team sheet.

"The reality took him to be there deservedly," said Bielsa.

"Every time I form a group for the squad, I always pick the best of those available."

Gray's presence at the club has been the source of much excitement and no-little amount of nostalgia for Whites, given his family tree.

His ability is a source of much excitement for the club's director of football Victor Orta who, when asked which player in the Premier League he considered undervalued, elected to talk about the 15-year-old.

"Look, I’ll answer you but I’m going to give you a different answer," he told La Media Inglesa, in an interview translated by Joe Brennan.

"He’s one of those players you see every, I don’t know. I remember Kun Agüero and saying “what is this?” It’s something that happens once in a long time, so I wanted to mention Archie Gray."

Bielsa might not consider the teenager ready for the Premier League now but sees an elite player in the making.

"He is a player that is full of virtues," said the head coach.

"In spite of being so young, he can compete. But clearly his process has been altered to get to be an elite player. He has the resources to achieve it, he will achieve it. He is very, very strong mentally. He has the conditions, the qualities to play in every sector of the pitch. Apart from that, he is a player who is very intelligent. I ignore what his life is, usually, but given how he behaves with us on a day to day basis I can see that his education is really well-controlled."