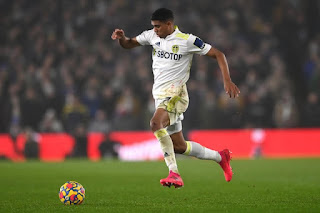 Twenty-year-old Drameh made his fifth appearance for the Whites when coming off the bench to replace Junior Firpo during the second half of Sunday's third round FA Cup clash at West Ham United.

The defender joined Leeds from Fulham in August 2020 on a four-year deal and made his Leeds first-team debut in October's EFL Cup clash at Arsenal.

A Premier League debut then presented itself five days later as a second-half substitute in the clash at Norwich City.

After another league outing from the bench at Manchester City, a first Premier League start materialised in December's hosting of Arsenal.

But Drameh has now joined Cardiff on loan until the end of the season, subject to international clearance.

Drameh will return to Leeds at the end of the campaign with the deal containing no option for the move to become a permanent one.

Cardiff sit fifth-bottom in the Championship table, four points clear of the drop zone, and Drameh could make his Bluebirds debut in Saturday's clash at Blackburn Rovers which is a 12.30pm kick-off.

Leeds currently have a whole host of players out injured including right back/midfielder Jamie Shackleton who is sidelined with an Achilles issue.

United, though, are looking to sign at least one central midfielder during the January window which could free up Stuart Dallas as another full-back option behind first choice right back Luke Ayling.

Shackleton is also expected back after the next international break.