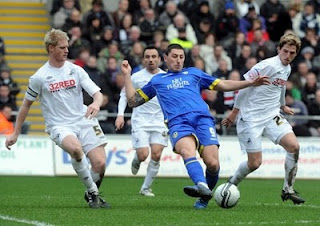 Yorkshire Evening Post 28/2/11 Swansea City v Leeds United: Whites Welsh woes worsen On their first and only other appearance at the Liberty Stadium, Leeds United all but conceded defeat in their pursuit of the League One title. In the same arena on Saturday afternoon, the club’s chance of automatic promotion from the Championship went much the same way. An eight-point deficit with 12 games to play? “If people want to right us off then that’s up to them,” said United’s manager, Simon Grayson. “I still think a lot will happen yet.” Ever the optimist, despite a game which left him with a face like thunder. Mathematics did not make the League One trophy an impossibility when Leeds were beaten in south Wales at the end of 2007 but they accepted their loss as evidence that they would have neither the skill nor the endurance to outrun Swansea City. As it did on Saturday, United’s defeat to a distinctly better team gave rise to sober reflection about their competitive limits. Those of sympath
Read more
- February 26, 2011
Telegraph 26/2/11 Swansea City 3 Leeds United 0: match report By Rob Stewart Swansea City remain on course for a place in the Premier League courtesy of two goals from Scott Sinclair and a third from former West Bromwich Albion striker Luke Moore. Sinclair, the 21-year-old former Chelsea starlet, struck either side of half time, to earn Brendan Rogers' side an 11th home win of the season and a ninth in their last 11 Championship games. Moore, who couldn't buy a goal in January, applied the finishing touch to a sublime Swansea performance, with his second in as many home games. In contrast, Leeds United, who had lost only three of their previous 16 away matches, were a shadow of the sideÂ so deserving of their place in the top six. However, they were unfortunate not to have been awarded a first half penalty when Alan Tate's blatant handball went unpunished. Still, they were second best for much of the contest and threatened only twice, through South African David Somma. The
Read more
- February 26, 2011
Mail 23/2/11 Leeds 3 Barnsley 3: Trippier rescues point for dogged Tykes Kieran Trippier scored an 82nd-minute equaliser as Barnsley twice came from behind to derail 10-man Leeds' npower Championship promotion push by picking up a deserved point. They took the lead early on when Jason Shackell powered home but the hosts started to show their class as the half wore and they equalised through Luciano Becchio. Max Gradel was awarded, and then stepped up to convert, a controversial penalty in the 37th minute before Matt Hill dragged the visitors level. Bradley Johnson was then dismissed for a second bookable defence and it looked like the game was slipping away from Leeds. However, Gradel capitalised on Shackell's error to put Simon Grayson's men in front once again. Dogged Barnsley refused to give up though and Trippier's 25-yard free-kick ensured the spoils were shared. The Tykes were quickest out of the traps as they broke the deadlock inside the first two minutes. Tripp
Read more
- February 20, 2011
Sporting Life 19/2/11 GRAYSON LEADS THE SOMMA LOVING Leeds manager Simon Grayson believes Davide Somma is too good to be labelled a 'super-sub' after the South African striker stepped off the bench to rescue a point for Leeds in a thrilling 2-2 draw with Norwich. Somma replaced Leeds midfielder Neil Kilkenny in the 74th minute with his side trailing 2-1 and slammed home a fine volley with his first touch 60 seconds later for his 12th goal in 22 appearances this season, 11 of his outings as substitute. Leeds had taken a 16th-minute lead through Luciano Becchio's header, but npower Championship promotion rivals Norwich hit back with Henri Lansbury lashing home an equaliser in first-half stoppage time. Wes Hoolahan fired the Canaries into a 69th-minute lead, but Somma had the final say. Somma has also been an unused substitute eight times this season and Grayson said: "He's a great lad. He's never once complained, he understood when I left him out last weekend, he
Read more
- February 20, 2011 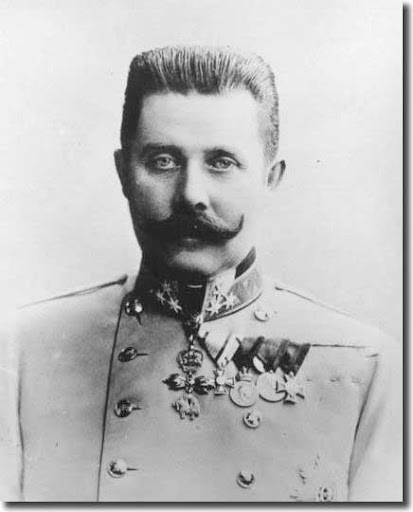 New pages uploaded at mightyleeds.co.uk 1914/15 season review – Ten years in the making Part 1 – Ravaged by war An assassination in Central Europe throws the entire globe into turmoil and leaves football in a chaotic mess Read the full story at http://www.mightyleeds.co.uk/seasons/191415.htm Part 2 – Ten years in the making City celebrate the tenth anniversary of their birth but start the season with a poor run of results Read the full story at http://www.mightyleeds.co.uk/seasons/191415part2.htm Part 3 – Erratic in the extreme The Peacocks' form teeters on eccentrically through the spring and the season ends in a whimper Read the full story at http://www.mightyleeds.co.uk/seasons/191415part3.htm Part 4 – Results, table and transfers All the results, scorers and attendances and final table from the 1914/15 season Read the full story at http://www.mightyleeds.co.uk/pdf/season191415part4.pdf Matches – 12 December 1914 Leeds City 7 Leicester Fosse 2 In the
Read more
- February 19, 2011
Yorkshire Post 19/2/11 Invisible man now stepping into the limelight Richard Sutcliffe talks to Leeds United’s unassuming attacking midfield man Robert Snodgrass, whose return to top form is driving them towards another promotion challenge. As if to reflect Robert Snodgrass’s growing reputation as one of the most promising talents outside the Premier League, a reporter from a leading children’s football magazine visited Leeds United’s training ground earlier this week to interview the Scot. The 23-year-old was asked all manner of questions for a feature that will appear in a forthcoming issue and clearly enjoyed the experience of wracking his brains on a number of off-the-wall topics. One of these was the enquiry, ‘What super-power would you like to possess?’ Straight away, the United midfielder replies: ‘Invisibility’ before adding: ‘It’s a question I have been asked before and that is still my answer’. Unfortunately for Snodgrass, this wish seems likely to be one that will not be gra
Read more
- February 17, 2011
Yorkshire Evening Post 17/2/11 Leeds United: Clean sheets are so important - Snoddy INTERVIEW Robert Snodgrass committed a Freudian slip last weekend when he acknowledged what he thought was the first example of successive clean sheets recorded by Leeds United this season. In fact it has happened once before, just too long ago for many to remember. The Scottish winger dominated the agenda at Elland Road between victories over Coventry City and Bristol City, excelling in both matches and making his Scotland debut in between, but nothing struck him as more significant than the sudden solidity within United’s defence. “They’ve been magnificent,” he said. “People talk about Robert Snodgrass scoring goals but the defence have been superb.” It may be modesty on the 23-year-old’s part but Snodgrass is of the opinion that Leeds’ promotion to the Premier League will rest on performances as rigid as that seen at Ashton Gate on Saturday. Prolific though the club might be, he argued that United a
Read more
- February 17, 2011 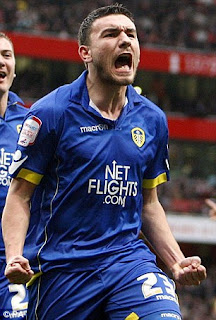 Mail 12/2/11 Bristol City 0 Leeds 2: Gradel and Snodgrass keep promotion bid on track Leeds extended their unbeaten run in the npower Championship to five matches with a 2-0 victory over Bristol City at Ashton Gate. Robert Snodgrass put United ahead with a superb solo effort with 17 minutes gone before Max Gradel doubled their lead with a clinical finish five minutes into the second half. The home side pressed for a way back into the game and hit the bar twice in a matter of seconds but it was not to be their day and Leeds held on for the win. Bristol City made a bright start and fashioned the first meaningful chance of the game when Jamie McAllister got forward and crossed for Martyn Woolford who headed over. However Leeds went in front after 17 minutes through a fine goal from Snodgrass. The Scot collected a pass from Gradel and turned superbly before fashioning some space and slipping the ball past Bristol City goalkeeper David James. Leeds immediately went in search of a second an
Read more
- February 12, 2011
leedsunited.com 9/2/11 CHAMPIONSHIP - A LEAGUE ONE REPEAT? United chairman Ken Bates says the promotion race in the Championship could prove to be just as dramatic as last season's battle in League One. After being seemingly home and hosed at Christmas, we were eventually overtaken by Norwich and on the final day of the season we were battling with four other clubs for the right to secure the second automatic promotion It was a dramatic end to a dramatic season, and the United chairman firmly believes this term could come to an equally tense conclusion. "We're three points behind second place which makes it very tight and very entertaining," the chairman told Yorkshire Radio. "There are six clubs that are creeping away. There's four points difference between sixth and seventh. There are games in hand, but these are equalling out. "It should make for a very exciting games between now and the end of the season. I think it's even closer this season than
Read more
- February 12, 2011 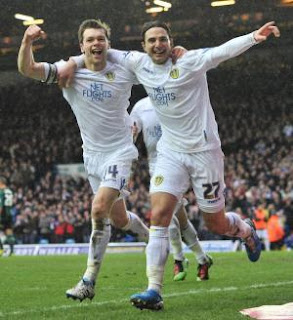 Bradford Telegraph and Argus 7/2/11 South African grabs decider as Leeds find winning formula By John Wray Leeds United 1, Coventry City 0 Leeds goal hero Davide Somma has set himself a double target for the season – 20 goals and automatic promotion to the Premier League. Whoever chose to put Somma’s picture on the front page of the match-day programme must have been clairvoyant as the South Africa striker scored the game’s only goal – his fourth in as many league games and his 11th of the season. Somma, who is on international duty against Kenya in Johannesburg this week, has had to be content with substitute duty for much of the season, manager Simon Grayson preferring a system with Luciano Becchio as the lone striker. But Somma partnered Becchio up front in the 2-2 draw at Hull and kept his place against Coventry as Grayson again adopted a 4-4-2 formation. “We have been drawing a lot of games so it was a relief to get the win,” said Somma. “The season is going like a dream come tr
Read more
- February 05, 2011
Leedsunited.com 5/2/11 SOMMA STRIKE SEALS SPOILS FOR LEEDS UNITED 1 (Somma 55), COVENTRY CITY 0 United manager Simon Grayson named an unchanged side for the visit of Coventry City in the wake of the 2-2 draw at Hull in midweek. Coventry arrived without a league win since early December, but they had the first chance when Richard Wood fired wide from close range after United failed to clear a corner. There were a few lively early challenges with both Robert Snodgrass and Carl Baker being on the wrong end of a couple during the first 15 minutes. It wasn't the most entertaining opening, but Leeds almost nicked the lead on 18 minutes. Snodgrass delivered a good cross from the right and Luciano Becchio stabbed his shot just wide of the mark. Moments later, Max Gradel used his trickery to cut in from the left, easing past Jordon Clarke brilliantly, but his shot was just wide of the mark. Within two minutes, Gradel tied Clarke in knots again before delivering another effort which was jus
Read more
More posts