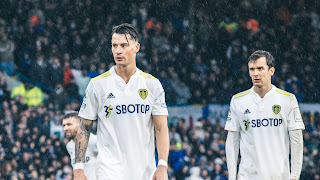 Let’s get the big news out of the way. Stop panicking. Leeds United aren’t getting relegated this season. Robin Koch says so.

Interviewed by Adam Pope on BBC Radio Leeds this week, Koch was so laid back it sounded like he was speaking from a chaise lounge. “For me personally, I don’t fear relegation,” he said. “I’m looking forward, and I’ll be confident and positive enough to say that we don’t go down and we will get enough points to stay in the league. We did well with two wins in the league, but this has to be the start and we have to keep going.”

Koch could be excused for feeling a little more pessimistic than this. After starting in the defeat we don’t want to talk about on the opening day of the season, he suffered his second serious injury since joining Leeds. His first was in the opening game of last season, injuring his knee on his debut at Liverpool. Koch played through the pain until December, when he eventually gave in to surgery and missed the next three months, by which point Diego Llorente had established himself in the team after his own fitness problems. This season Koch was ruled out immediately after the Scum defeat and again tried to avoid surgery, before going under the knife to fix what Marcelo Bielsa seemed to enjoy describing as a “rebellious pubis”. While Moscow and Michael were arguing about the meaning of ‘perpetually injured’ on The Square Ball podcast, Koch was watching from the sidelines as Leeds won only three of sixteen in the Premier League in his absence. Plenty of fans were contemplating the frightening prospect of relegation, but Koch is far too cool to let form or fitness get him down. Being positive “is just part of my personality.”

“For every player it’s not easy to get a long term injury,” he says. “I’ve had two of them. So it wasn’t the easiest time, but I had to be positive as well and imagine my comeback every time. I tried to work hard every day for this comeback. So I’m really happy to be in this position now, and happy to play again.”

Rehabbing alongside Adam Forshaw helped Koch, who put his time in the treatment room into perspective by looking at Adam, waiting over 700 days between league appearances. This aspect of Forshaw’s recovery could be overlooked, the inspiration and hope his superb form since returning must provide for other injured players at the club, whether they’re an experienced Germany international like Koch or a young player desperate to kickstart their career like Ian Poveda.

Apart from his comeback appearance at centre-back against Arsenal, Koch has been playing alongside Forshaw in midfield rather than his more natural position in defence. It’s a role he tried towards the end of last season, starting there for the first time in a Leeds shirt in the dismal defeat to Brighton before helping the side wipe the floor with Tottenham from the same position a week later. There are signs he is improving in the part this season, and he sounds particularly enthused when Popey mentions he looked more creative in the win over West Ham.

“It’s not quite a completely new position for me. Of course, it’s a bit different to my position as a centre-back, but I played it at my old club lots of times and even some games for the national team in the midfield. It’s for me more about getting fit and back from injury. It was a bit different, but it’s a good challenge for me personally. And I think it’s going well.

“I would say [my ability on the ball] is one of my qualities. It doesn’t matter whether I play centre-back or defensive midfield to start the building up from defence or the back of midfield.”

Earlier this week German outlet Sport 1 reported national team manager Hansi Flick has been in contact with Koch throughout his recovery, even though Koch is yet to play for his country under the new coach, who replaced Jogi Low after the European Championships in the summer. The article says Flick values Koch’s ‘variability and reliability’ as well as his ‘personality’, a big compliment from a manager who won a treble with Bayern Munich, even if they still won’t give back the European Cup they stole from Leeds in 1975.

“It’s important now to play some games and put more performances on the pitch again, then we see how it goes with the national team,” says Robin. “It’s a big target for me to get back into the national team. [We didn’t speak] about the position he’d like me to play, but we’ve been in contact during my injury. He asked how it’s going, and then after my surgery as well. It’s good to be in contact, and with the other coaches and the medical staff from Germany. It gives you a good feeling when you are injured and out for a long time to be contacted by the national team.”

After so many frustrations in his first eighteen months at Leeds, things are finally starting to go right for Koch. The 3-1 win over Burnley was the first time he experienced winning in front of a packed Elland Road, and friends and family have now been able to visit Leeds to see him play. After moving to England during the pandemic, while the country was in and out of lockdown and ever-changing Covid restrictions, he is now getting to explore Leeds properly for the first time. “With all the Covid stuff it wasn’t too easy to enjoy Leeds in the beginning. Now I’m enjoying living in Leeds, and playing for Leeds even more.”

Anyone who takes a look at Koch’s Instagram profile will notice he has fit right into a squad of players that might just be one of the coolest in Leeds United’s history. He’s got the haircut, moustache and retro football gear to rival Mateusz Klich as the club’s head hipster. Given Koch’s current position, it might not be long before Leeds are starting a central midfield partnership wearing New Yorker tote bags on their shoulders. Unsurprisingly, Koch names Klich as the teammate he is closest to. Mateusz speaks German, and they previously spent a season together at Kaiserslautern, although Robin was still a young player in the reserve team, so they only played together twice.

Koch insists the whole squad is full of “good people” that gave him “a really, really warm welcome from my start here.” But there are some cultural differences he needs to resolve with Patrick Bamford.

Thankfully this isn’t a repeat of Felix Wiedwald feeling homesick, unable to find good bratwurst in West Yorkshire, more a cultural tiff between two friends. It may have taken longer than we all hoped, but Robin Koch is starting to feel at home in Leeds and Leeds United is all the cooler for it, coming closer every day to a full squad riot in an artisanal bakery.