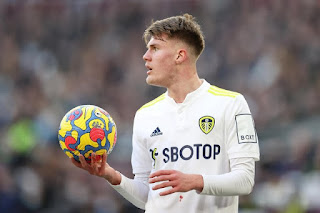 Leo Hjelde has revealed the demands required upon his switch to Leeds United from Celtic and the magnitude of Marcelo Bielsa's influence on his progress.

Hjelde spent the second half of the 2020-21 campaign on loan from Celtic at Ross County and joined Leeds on a four-year deal in the summer.

The 18-year-old defender quickly began impressing for United's under-23s and was handed a Whites first team debut when starting the third round FA Cup tie at West Ham at the beginning of this month.

Hjelde excelled in seeing out 78 minutes at centre-back and was then introduced from the bench in the following weekend's Premier League rematch at the Hammers after an injury to Junior Firpo.

The Norway under-21s international was brought on in the 23rd minute and produced another pleasing performance, this time at left back.

Hjelde was then back on the bench for Saturday's Premier League defeat at home to Newcastle United as Diego Llorente returned from suspension and was one of several Leeds youngsters to be hailed by CEO Angus Kinnear in his matchday programme notes.

The teen who was born in Nottingham and later grew up in Norway has enjoyed a stellar start to his Whites career but says his adaptation to life at Leeds in the Premier League has been greatly aided by Bielsa and very hard work.

Speaking in an interview with Norwegian outlet NRK, Hjelde said: "The start has been very nice, but it took me a couple of weeks to get into everyday training.

"I was told that I had to lose a few kilos to become a Premier League player.

"You have weight goals, so I was told to lose a few kilos to be at the combat weight they wanted.

"It was a bit heavy to step down on the food

"In Celtic I was told that I was too light.

"I ate a little more, and the workouts were nowhere near as hard. It was a shock to come from Scotland. It is a completely different level here.

"I have received good backing from the club and the players around."

Hailing the impact of Bielsa, Hjelde said: "He has helped me a lot to achieve my goals. I have been with the first team since the first day.

"It has done a lot for me to work under one of the world's best managers.

"He has been tough at times. You get to feel it somehow.

"There is a lot of running. For my part, it has been brutal training days at times.

"I remember I played against Patrick Bamford and was tired after two minutes. And then it was half an hour left!"