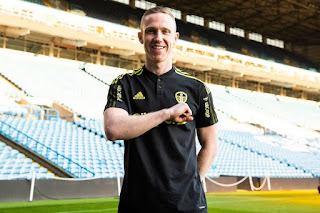 Adam Forshaw has stamped out the last embers of the injury hell which dogged his life for two years with a new contract which underlines his Leeds United progress.

The 30-year-old has gone from the depths of anonymity and questions about his very future as a footballer to becoming one of Marcelo Bielsa’s key lieutenants on the field once more.

Terms have been agreed on a contract until 2023 with United holding the option of a further 12 months should they wish to extend his stay yet further.

Speaking ahead of the announcement on Friday, Bielsa said: “[It’s] very difficult for me to refer myself to Forshaw at this moment where he's given such a valuable response because I didn't think Forshaw was going to be the player he was once before.

“I don't want it to seem like the process Forshaw went through wasn't with my support.

“He did it by himself with all the support the club gave him which was big support, but I didn't participate in his success, I only accompanied him.

“And when the moment came I gave the responses he deserved to play, but in the important part of those two years I wasn't there with him so I don't want to link myself too much to him because I don't want to impose on his success.

“The club will make a very convenient decision if they extend Forshaw because every week he's showing he's a player of a very good level.”

Forshaw did not play a single minute for United between October 2019 and August 2021, when he played against Crewe Alexandra in the EFL Cup.

The midfielder is now onto 15 appearances in all competitions this season.