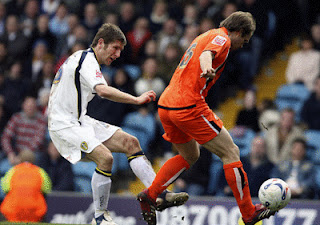 Sunday Times 11/3/07 Leeds grab lifeline Leeds 1 Luton 0 Rob Hughes at Elland Road There remains the faintest, nervous chance of Leeds United clawing their way out of the pit of despair. Both these clubs remain in peril of the drop to the third tier of English football this morning, but courtesy of a coolly taken goal by Richard Cresswell and by a penalty save from Casper Ankergren near the end, Leeds were able to claim their first win since February 10 and ignite the first inkling of belief that they will yet survive this nervous end to the season. There remains something remarkable about Leeds, the only club in this Yorkshire city. A hardcore of 27,000 still come on a moody, windswept afternoon to Elland Road, appearing to believe in the miracle of survival. And from all that’s around the club, from its descent from what once was a force in Europe, there remain frighteningly familiar panics. In the match programme, Ken Bates, now two years in the chair, is still accusing others of be
Read more
- March 04, 2007
Daily Mail 3/3/07 Wise on the warpath By DEREK HUNTER Leeds United 2 Sheff Wed 3 The crisis at Leeds United plumbed new depths yesterday after Dennis Wise’s side crashed at home against 10-man Sheffield Wednesday 48 hours after skipper Kevin Nicholls demanded a return to his former club Luton. Nicholls was immediately stripped of the captaincy, with Wise claiming he was "gobsmacked" by Nicholls’s attitude. Luton are one of the clubs struggling for survival whom Leeds are desperate to overhaul and who visit Elland Road for an important Championship head-to-head next Saturday. Furious Wise said: "Kevin Nicholls came in to see me on Thursday and I had a call from Luton’s manager Mike Newell, who said he was interested in signing Kevin. I said I was not interested in letting him go to Luton. I told Kevin he needed to think about it but he said he had made up his mind, that he made the wrong decision to come to Leeds and wanted to join Luton straight away." Wise said the
Read more
More posts