Showing posts from August, 2008
Show All
- August 28, 2008
Sporting Life 26/8/08 McALLISTER HAILS TRIUMPHANT Leeds By Wayne Gardiner, PA Sport Leeds manager Gary McAllister lauded his side after they overpowered Championship outfit Crystal Palace 4-0 in the second-round of the Carling Cup at Elland Road. The hosts had too much power in attack for Neil Warnock's faltering side with Jonathan Douglas, Jermaine Beckford, Luciano Becchio and Enoch Showumni all getting on the scoresheet. The four-goal rout means that Leeds have posted nine goals in their two games in the competition so far following the 5-2 win at Chester and McAllister was delighted with the manner of the victory following two sub-standard showings in the league. "I like the way that we got some rhythm and fluency to our play," he said. "The clean sheet was a good confidence booster for the whole club. We've scored nine goals and we're looking to play with flair and rhythm. "The two performances against Oldham and Yeovil were not quite up to the stan
Read more
- August 24, 2008 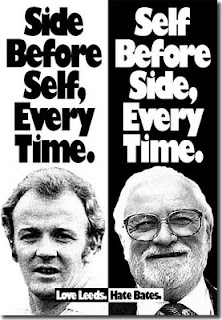 New pages uploaded at mightyleeds.co.uk Season Review – 2007/08 – Minus 15/The fightback begins United enter financial administration and endure a succession of setbacks as Ken Bates struggles to retain control. Cleared to return to League action, United storm into an astonishing start before losing Gus Poyet. An old favourite returns to Elland Road to fire a revival of United's season which ends in failure at Wembley. Read the full story at http://www.mightyleeds.co.uk/seasons/200708part1.htm http://www.mightyleeds.co.uk/seasons/200708part2.htm http://www.mightyleeds.co.uk/seasons/200708part3.htm http://www.mightyleeds.co.uk/seasons/200708part4.xls
Read more
- August 23, 2008
Leedsunited.com 23/8/08 UNITED PAY PENALTY YEOVIL TOWN 1 (Owusu 62 pen), UNITED 1 (Becchio 1) United boss Gary McAllister made one change to his starting line-up for the trip to Yeovil Town with striker Luciano Becchio making his full league debut in place of Enoch Showunmi, who started on the bench. And the decision paid immediate dividends with the Argentinian repaying the manager just 25 seconds into the game. Rui Marques lifted the ball over the top, Becchio capitalised on indecision at the back, and managed to steer the ball past Yeovil goalkeeper Asmir Begovic to give United a quick-fire lead. It was a great start for United - it was the quickest goal since Jermaine Wright's 11-second goal against Burnley in November 2004 - and Jermaine Beckford went close to furthering the advantage inside six minutes when he lifted a shot over the top following good work on the edge of the box by Jonny Howson. Beckford was causing problems for Yeovil and when he won a second successive fre
Read more
- August 14, 2008
Yorkshire Evening Post 13/8/08 Leeds United cup hero Beckford is not for sale By Phil Hay Gary McAllister today vowed to fight off any bids for Jermaine Beckford before the transfer window closes after the striker's first professional hat-trick fired Leeds United into the second round of the Carling Cup. Beckford struck three times in the first half of last night's televised tie at Chester City to guide Leeds to a 5-2 victory and take his tally of goals to four after only two matches of the 2008-09 season. The 24-year-old secured United's 2-1 win over Scunthorpe on Saturday, and a sublime treble at the Deva Stadium – completed by an audacious 30-yard lob – has set him on course to repeat the haul of 20 goals he produced for Leeds last term. Beckford is arguably United's most valuable player and has been linked with both Derby County and Norwich City during the past eight months, but the improving financial position at Elland Road left McAllister under no pressure to se
Read more
- August 10, 2008 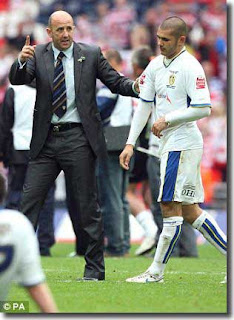 New pages uploaded at mightyleeds.co.uk Matches – 25 May 2008 – Doncaster Rovers 1 Leeds United 0 After such an extraordinary season, United were always destined to go right to the wire. They made a first appearance at the new Wembley, but couldn't find the big performance they needed Read the full story at http://www.mightyleeds.co.uk/matches/20080525.htm
Read more
- August 09, 2008 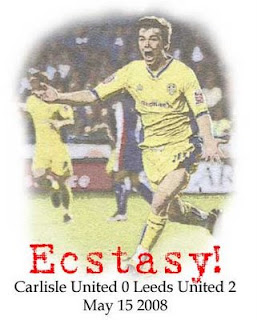 New pages uploaded at mightyleeds.co.uk Matches – 15 May 2008 – Carlisle United 0 Leeds United 2 United recover from defeat in the first leg at Elland Road to win a memorable second leg at Brunton Park and book their place in the League One play-off final at Wembley Read the full story at http://www.mightyleeds.co.uk/matches/20080515.htm
Read more
- August 09, 2008 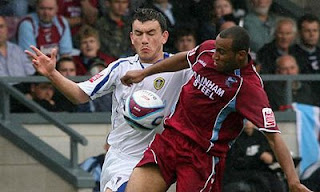 Guardian 9/8/08 Late Beckford strike earns points for Leeds Benjie Goodhart Leeds United justified their status as League One favourites with a hard-fought 2-1 win at Glanford Park in the Football League's first game of the season. But Gary McAllister's men had to come from behind, securing victory late on thanks to Jermaine Beckford's 80th-minute winner. Both sides thought they'd secured the honour of scoring the opening goal of the Football League season in a first half that was officially goalless, but short of neither incident nor controversy. Scunthorpe fans were celebrating after 28 minutes when captain Izzy Iriekpen headed home a Grant McCann free-kick, only for the goal to be ruled offside. It was Leeds, though, who were left fuming at half-time, after Scunthorpe keeper Josh Lillis appeared to fumble Robert Snodgrass's shot over the line. The assistant referee declined to award the goal, to the ill-disguised fury of the Leeds players. The afternoon got wor
Read more
More posts