Showing posts from October, 2010
Show All
- October 23, 2010
Yorkshire Evening Post 20/10/10 Leeds United v Leicester City: Inconsistent Whites outfoxed By Phil Hay Distant though it might have been, a Carling Cup tie staged in August told Leicester City that they should visit Elland Road last night expecting to win. Likewise Preston North End's riotous victory at the same venue a month ago. Leeds United like to think of their stadium as safe ground and, in Simon Grayson's days as manager, it has been; the scene of only six away wins in league fixtures staged there. But if Grayson feared that word of his club's fallibility was spreading, last night's reunion with Leicester confirmed his suspicions. The display of strength he anticipated failed to materialise, and satisfactory recompense for Leeds' chaotic defeat to Preston will come at a later date. For much of the evening, Grayson must have wondered if he was watching the same game, he cut a bewildered figure on the touchline as Leicester under the calm hand of Sven Goran Er
Read more
- October 23, 2010
Yorkshire Evening Post 19/10/10 Somma and Becchio are striking up top partnership By Phil Hay It is a compliment to the squad at Elland Road that many weeks have passed since Simon Grayson was last asked to discuss Jermaine Beckford, a striker who once seemed irreplaceable. Grayson was questioned throughout the summer about the likely implications of losing an asset as reliable as Beckford had been, and the 26-year-old's name might easily have cast a shadow over Leeds United's season. As it is, Beckford is yet to be missed. United's resources are not without weaknesses or their performances free of imperfections, but no issue can be taken with their reliability in front of goal. Again on Saturday, they showed themselves to be a team who know how to find the net. Davide Somma's seventh goal of the season and Luciano Becchio's fifth claimed a 2-1 victory from a game at Middlesbrough in which United's shots on target numbered five. On only one occasion in 13 matche
Read more
- October 17, 2010 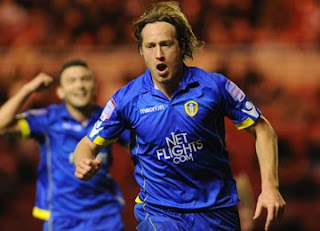 Leedsunited.com 16/10/10 BECCHIO SEALS BATTLING WIN AT BORO MIDDLESBROUGH 1 (Boyd 53), LEEDS 2 (Somma 12, Becchio 63) United went into the game on the back of two defeats and Simon Grayson tweaked with his side once again, welcoming Paul Connolly back from injury and recalling Luciano Becchio to his starting line-up. Middlesbrough were in the lower reaches with the pressure reportedly mounting on manager Gordon Strachan. Crowds have also dipped at the Riverside Stadium, but with over 4,000 visiting fans and an increased home turnout, there was a decent atmosphere. And it was United who started brightly, Jonny Howson firing over the top from an angle inside the opening moments. George McCartney also had an effort blocked by Matthew Bates after some good build-up play. United's early intentions were to pass the ball around while Boro were looking to play on the counter. And Leeds were in front inside 12 minutes when Davide Somma converted a Watt cross from the left and put it b
Read more
- October 17, 2010
leedsunited.com 15/10/10 PREMIER LEAGUE KEEPER JOINS ON LOAN Tottenham goalkeeper Ben Alnwick has joined Leeds United on a 28-day loan. The 22-year-old former England under-21 international will join up with his new team-mates in readiness for Saturday's trip to Middlesbrough. Alnwick, who made his Spurs debut in the Carling Cup semi-final clash with Burnley in January 2009, was understudy to Heurelho Gomes during the 2009/10 season and made his Premier League debut on the final afternoon, also against Burnley. The keeper started his career with Sunderland where he made 22 appearances before joining Spurs in a £900,000 deal three years ago. His other league experience has come with loan spells at Luton, Leicester, Carlisle, and Norwich City.Alnwick is without a senior appearance this season, but is expected to go straight into the Leeds squad at Boro.
Read more
- October 17, 2010
Yorkshire Evening Post 11/10/10 Bates set his sights high By Phil Hay Leeds United chairman Ken Bates insists he has not been demoralised by a handful of sobering results, saying he expects the club to be in the "top six or seven" of the Championship at the end of the season. Bates criticised the mediocre defensive record that dictated United's form during the first two months of the term but said he had seen nothing to suggest that Leeds would not be possible contenders for promotion. The 78-year-old's assessment at the 10-game mark echoed opinion in the city by reflecting harshly on the concession of 18 league goals – a tally which Bates said was "unacceptable" – but he sees the Championship as a division devoid of outstanding teams which remains as open as it did at the start of the season. United will resume their campaign at Middlesbrough on Saturday evening, when manager Simon Grayson will attempt to stave off a third straight defeat, but the club reac
Read more
- October 09, 2010
Yorkshire Evening Post 4/10/10 Whites fail to learn lessons By Phil Hay The postmortems held by Leeds United after Barnsley and Preston North End were grisly affairs; "cringe-worthy" according to the coach who ordered them. Eleven concessions reviewed by a chastened squad of players included not a single clever, inventive or admirable goal. The same complaint was audible at Portman Road where the coach in question candidly admitted that he was starting to mimic a broken record. It would not please Simon Grayson to blame league defeats on superior opposition but it would make a change from discussing them in terms of Leeds United's faults. There was infinitely more to last week's disaster against Preston than a frail defence – indicted by that performance was the attitude, the leadership and the pride of Grayson's squad – but it was prevalent nonetheless in a game of no merit and serious tactical deficiency. On Saturday, a 2-1 defeat to Ipswich Town was profession
Read more
- October 02, 2010 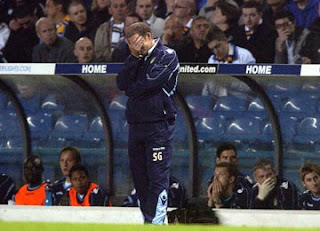 leedsunited.com 29/9/10 ASHAMED AND EMBARRASSED... Manager Simon Grayson apologised to the Leeds United fans after Tuesday's 6-4 home defeat at the hands of Preston and admitted he was "embarrassed and ashamed" by the performance of his players at Elland Road. Leeds contrived to surrender a 4-1 lead in the game to concede six goals on home soil for the first time in the club's history as Preston staged the most amazing comeback in their own history. It was a completely stunning game to watch, and the United manager was furious with his players after the game. "It was absolutely gobsmacking," said Grayson. "I was lost for words. I was embarrassed and ashamed...unprofessional is another word you could use. "We actually looked decent for a period in the first half, went 4-1 up, and were a major threat - but it still wasn't good enough. We said to keep it tight and see the first half out, but the goal before half-time gave them a lift and made it
Read more
- October 02, 2010 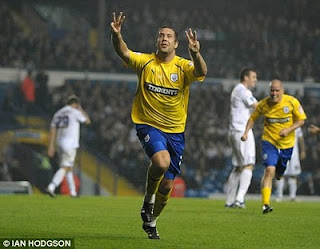 Daily Mail 29/9/10 Leeds 4 Preston 6: Jon Parkin scores glorious hat-trick as Preston produce amazing comeback to stun Elland Road By Neil Barraclough Even in the madness that was Leeds United 10 years ago, Elland Road has surely never witnessed a match as bizarre as this. Leeds were outstanding during an opening 40 minutes in which they made Preston look ragged and well-beaten. But their almost comic implosion from a 4-1 lead had visiting fans laughing in the stands and Darren Ferguson celebrating a win that had looked as unlikely as the final score. Ferguson said: 'I've never been involved in anything like that. It was an amazing game and my players deserve all the credit. 'I don't think anyone has ever come to Elland Road and done that from 4-1 down. It can get very nervy here at Leeds. The second and third goals were the important ones for us. After that, we could smell a bit of blood.' Jon Parkin's hat-trick was the highlight for Preston, but Leeds will s
Read more
More posts