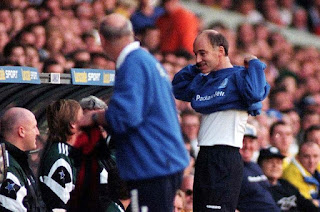 Newcastle United are sitting at the wrong end of the Premier League table ahead of today’s clash against Leeds United at Elland Road.

Matters were rather different for the Magpies some 25 years ago, the Geordies approaching the 1997-98 campaign following two second-placed finishes in a row.

But that didn’t stop George Graham’s Whites recording a 4-1 success against Kenny Dalglish’s visitors back on Saturday October 18, 1997.

Leeds had finished the previous season in 11th place, the Whites badly struggling for goals as part of a campaign in which Graham replaced axed title-winning boss Howard Wilkinson in September.

The Whites netted just 28 times, scoring 45 fewer goals than Newcastle, who finished runners-up to Manchester United – the Magpies ending the season under Dalglish, who took over following Kevin Keegan’s resignation in January.

The Magpies then began the following season in decent fashion but it all went wrong for Dalglish’s side at Elland Road as Leeds ran riot in West Yorkshire against a Toon side without key duo Alan Shearer and Faustino Asprilla.

A unique sight then followed as referee David Elleray was required to change his top due to complaints from the Magpies about his dark jersey clashing with Newcastle’s black strip.

The official headed to the sidelines and pulled on a blue Leeds training top, complete with the old Whites badge on the front.

Graham’s side continued to apply the pressure, Kewell robbing Steve Howey of possession some 30 yards out and then launching a rising effort that was heading for the top left corner until Shay Given pushed the ball wide.

But a Leeds opener looked imminent, and it arrived in the 30th minute after fine work from Rod Wallace, the forward working his way around Darren Peacock on the left flank and sending in a low cross that Bruno Ribeiro directed past Given with an outstretched boot.

And the Whites doubled their lead eight minutes later as the Magpies made a complete mess of attempting to clear after Given had punched clear a David Wetherall cross.

Warren Barton and Rob Lee both failed to clear their lines, Lee turning back towards goal and being dispossessed by Kewell, whose shot from a tight angle was partly blocked by Peacock... only to rebound back off the Australian’s knee and over Given into the back of the net.

The Magpies were having a disaster, and more sloppy defending led to the Whites bagging a third shortly before the half-time break.

Kelly’s free-kick from the left flank was poorly cleared by John Barnes, the ball only falling to David Hopkin, who fired in a low drive which then took a huge deflection off John Beresford.

Given was left wrong-footed and looking on in despair as the ball trickled over the line.

The Magpies entered the interval 3-0 down and Elleray changed into a green top for the second half, but the Toon’s misery continued after the restart as Leeds bagged a fourth just two minutes into the second half.

Kelly sent in a swirling corner from the left flank and Wetherall stormed in with a flying leap to outjump the Magpies defence before sending a firm header past Given.

Just 11 minutes after his introduction, Gillespie pulled a goal back, punishing Martyn as the Whites ‘keeper came racing out of his box looking to clear a long ball.

The Magpies winger got there first and nodded a glancing header into an empty net.

But the damage was well and truly done and it was Newcastle left with an empty feeling departing Elland Road.