Showing posts from April, 2008
Show All
- April 27, 2008
Yorkshire Evening Post 26/4/08 Macca: Hard work starts here for United By Phil Hay Gary McAllister was beginning his preparations for the play-off semi-finals today after Leeds United guaranteed a top-six finish with a 1-0 win over Yeovil Town. A fourth-minute goal from Dougie Freedman earned United three points from their first-ever visit to Huish Park and gave the club an unassailable lead over seventh-placed Brighton in the League One table. But last night's victory in Somerset came at a cost following left-back Alan Sheehan's dismissal in the 65th-minute for a two-footed tackle on Yeovil defender Lee Peltier. The on-loan Leicester City player dived into a challenge on the halfway line, bringing an immediate red card from referee Keith Stroud, and Sheehan is expected to incur an automatic three-match suspension for serious foul play. The ban will sideline Sheehan during next weekend's fixture against Gillingham at Elland Road but will crucially prevent him from featurin
Read more
- April 20, 2008
Telegraph Sunday 20/4/08 Leeds remain focused on promotion By Les Roopanarine Millwall (0) 0 Leeds United (0) 2 Leeds United remain the club of innumerable quandaries, and no wonder. What else can you be when, having almost reached a Champions League final, you are relegated twice in four seasons, forced into administration, threatened with league exclusion and then hit with a 15-point deduction, the largest in Football League history, for an alleged breach of insolvency rules? How do you deal with the emotional topsy-turvy of starting the season at breakneck pace, losing your momentum and management team in mid-campaign, then reclaiming a play-off spot with five games to go, all against the backdrop of a protracted and acrimonious legal struggle to reclaim the docked points? If you are Gary McAllister, the man whose task it is to steer a course through this sea of questions and into the Championship, you simply ignore the bigger picture and focus on the present. "It's been
Read more
- April 19, 2008 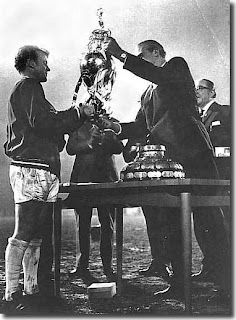 New pages uploaded at mightyleeds.co.uk Season Review – 1968/69 - Going for the one/Champions Don Revie focuses his sights sharply on a first League title and United hold their nerve and their imperious form to outdistance Liverpool in the battle for the championship Read the full story at http://www.mightyleeds.co.uk/seasons/196869part1.htm http://www.mightyleeds.co.uk/seasons/196869part2.htm http://www.mightyleeds.co.uk/seasons/196869fix.htm Yorkshire Evening Post 18/4/08 United arbitration goes into extra-time By Phil Hay Leeds United's arbitration hearing is set to run into a fourth day amid growing concerns that the dispute will throw the end of the League One season into chaos. The independent review of United's 15-point deduction was originally planned to end today but the case is now expected to conclude when final submissions are presented to the three-man tribunal panel in London on Monday. But confusion surrounds the timing of a decision on whether the Football Leagu
Read more
- April 12, 2008
Leedsunited.com 12/4/08 DOUGIE'S DAY! United boss Gary McAllister paid tribute to Dougie Freedman after the striker scored twice to secure a magnificent 3-2 victory against second-placed Carlisle United. Freedman scored twice in the second half after Carlisle had been leading 1-0 at the interval, and the United manager revealed: "We've spoken about his guile and his touch of class, but we have to applaud his physical state. "We sent him home last night and he re-appeared this morning and wanted to play. As soon as he looked me in the eye and said he wanted to play I had no doubts. "The same goes for Jermaine Beckford who had been having treatment this week, but players know when they have the jersey they want to keep it." Jonny Howson was United's other goalscorer and the boss said: "He's a very promising player. He's not flash, he's just a guy who gets on and does his job. He's at an age where he listens and learns." Carlisle
Read more
- April 06, 2008
Yorkshire Evening Post 5/4/08 Leeds United are Beck in the play-off mix By Phil Hay Leyton Orient 0 Leeds United 2 THE demands of Gary McAllister's initiation at Leeds United were emphasised last night by the club's reappearance in League One's top six. United had their hand on a play-off position when McAllister walked through the door at Elland Road, but the sharp end of the division has been uncharted territory for the Scot ever since Leeds collapsed in a heap on his managerial debut. That was until yesterday, 11 games later, when a victory at Leyton Orient thrust Leeds into sixth place and sent several teams tumbling away beneath them. Orient were pulled up by Martin Ling with the exhausted look of a Grand National outsider, and Oldham and Brighton failed to produce victories on a day when the value of United's result was enhanced by scores elsewhere. Ultimately, it was Tranmere's defeat at Walsall which opened the gates to the six-room penthouse. Paul Huntingt
Read more
More posts