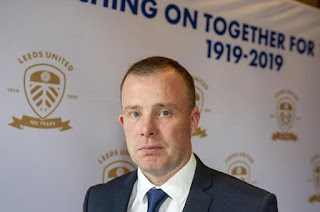 LEEDS UNITED managing director Angus Kinnear has slammed VAR decision-makers for a lack of consistency following two controversial incidents in the club's last two matches in both league and cup at West Ham.

Perhaps more than any other top-flight side, Leeds have been on the receiving end of a harsh technology calls via VAR so far this season.

One arrived in last weekend's league win at West Ham after Mateusz Klich's 74th-minute strike was chalked off when he netted after getting on the end of a Raphinha pull back.

However, instead of Leeds going 4-2 ahead, his effort was ruled out by VAR after cameras spotted the ball struck team-mate Rodrigo on its way into the back of the net.

Rodrigo, who was standing in an offside position just inches from the line, inadvertently got the final touch, with VAR wasting no time in disallowing the goal.

Seven days earlier, when Leeds visited the London Stadium for an FA Cup third-round tie, Manuel Lanzini controversially gave the Hammers the lead in the third-round tie with a scrappy goal following a scramble inside the box.

There was a lengthy VAR check for Jarrod Bowen's involvement in the goal before Lanzini struck the ball into the net.

The point of contention was whether a block on a Nikola Vlasic shot ricocheted back off the Croatian into the path of Bowen who went for the ball from an offside position.

VAR eventually decided that the goal should stand.

Kinnear, writing in his programme notes ahead of the Newcastle United home game, commented: "VAR reared its ugly hard once again in both West Ham games. In the first, it ultimately cost us our place in the fourth round with an inexplicable interpretration of whether a player was 'active' with an attacking player 'actively' challenging Illan (Meslier) and prompting many to recall the Brian Clough quote: "If any one of my players isn't interfering with play, they're not getting paid."

"The irony was that a week later, as (Mateusz) Klich's shot sailed unchallenged into an empty net, an immaterial glance off an evasive Rodrigo was judged by VAR as offside.

"This was no doubt right by the rule book, but I'm unsure whether many supporters would agree that it was right in spirit.

"If the cost of VAR is going to continue to be the disruption of the rhythm of the national game and the spontaneous emotions of players and fans, it needs to be robustly adding value to critical decisions which would have led to meaningful injustices. Against West Ham, it felt like it failed this task twice.”