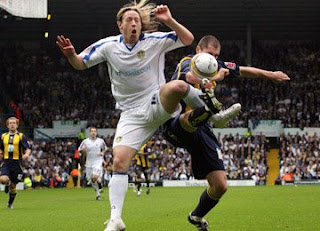 Yorkshire Evening Post 11/10/08 Whites answer critics in style Defeat is an expensive habit, and the question before kick-off at Elland Road yesterday was whether Leeds United had stumbled unwittingly into a losing trend. Two minutes at the end of the first half against Brighton was all it took to settle that debate and return perspective to United's season. Luciano Becchio whipped home a volley 60 seconds before Jermaine Beckford's flying header flew into the net with the help of the crossbar, crushing a bewildered Brighton team. After that flash of activity, Gary McAllister breathed easily again. United's manager was never likely to allow panic to set in after a tight league defeat to Peterborough and a debacle of a performance in the Johnstone's Paint Trophy at Rotherham United, but the tepid performances which took Leeds into yesterday's game were not at all to his liking. McAllister would have been required to looked back to March 2007 to find the last
Read more
More posts