Showing posts from October, 2007
Show All
- October 31, 2007
Yorkshire Evening Post 31/10/07 Dave Bassett bound for Leeds United By Phil Hay DAVE BASSETT was today on the brink of becoming Leeds United's new assistant manager. The 63-year-old has been identified as Leeds' first-choice replacement for Gustavo Poyet, and United were working today to reach a deal which would bring Bassett to Elland Road for the rest of this season. Dennis Wise had other alternatives available to him - notably Ray Wilkins, his managerial colleague at Millwall - but he has turned instead to the man who launched his playing career at Wimbledon back in 1985. Ex-Wimbledon boss Bassett signed Wise from Southampton when the midfielder was 18 years of age, and a five-year stint at Plough Lane was the making of Wise, who went on to join Chelsea for £1.6million in 1990. Bassett also worked with Wise at Leicester six years ago, and the pair were reunited briefly as joint-caretakers of Southampton in 2005 following Harry Redknapp's exit from St Mary's. They ar
Read more
- October 28, 2007
Sunday Times 28/10/07 Leeds take it easy Leeds 4 Millwall 2 Richard Rae at Elland Road Gus Poyet may be leaving - the Uruguyan is expected to accept the post of assistant to Juande Ramos at Spurs tomorrow - but Leeds march on. Dennis Wise cut an isolated figure without his long-standing side-kick, but the United boss celebrated a year in charge by overseeing his team’s 11th win in 13 games; incredibly, given the 15-point handicap under which they began the season, it took them into a playoff position. Yet Millwall almost punctured the bubble of anniversary good-will within five minutes of the start. Will Hoskins and Gary Alexander exchanged passes in the penalty area before Hoskins lifted the ball over Casper Ankergren and into the United net, only to see the linesman flagging for offside. Jamie O’Hara headed Ahmet Brkovic’s cross over the bar, and Brkovic himself saw a deflected shot spin wide of the post as the visitors, initially, looked the more dangerous team. As the half drew on
Read more
- October 27, 2007
Leedsunited.com 27/10/07 TOP SIX! United boss Dennis Wise was dealt an injury blow ahead of the game when loan signing Radostin Kishishev suffered a muscle strain during the final moments of Friday's training session, and was ruled out. Ian Westlake joined Jonathan Douglas at the centre of the midfield. Wise was also joined by skipper Alan Thompson in the dug-out with assistant boss Gus Poyet not attending the game, following media speculation linking him with Tottenham Hotspur. It was the visitors who actually had the ball in the net, though, with a disallowed effort in the third minute. Will Hoskins finished off a neat passing move, but the former Rotherham striker had strayed into an offside position. Hoskins also skied a header over the top after Ahmet Brkovic delivered a cross from the right. But the United response was immediate and Jermaine Beckford sent a shot inches wide after escaping the clutches of a Millwall defender. Beckford also did well to win a corner after a Tre
Read more
- October 27, 2007
Yorkshire Evening Post 26/10/07 Poyet: 'I haven't spoken to anyone' By Phil Hay Gus Poyet has spoken out as Tottenham Hotspur were today preparing to move for the Leeds United assistant manager. The Uruguayan is Spurs' first choice to fill the role of assistant manager at White Hart Lane following the sacking of boss Martin Jol and first-team coach Chris Hughton. The former Uruguay international, who played for Tottenham between 2001 and 2004, is quoted on BBC Sport saying: "Everybody is calling me and sending me texts about it but I don't know anything. I haven't spoken to anyone. "I don't know if something has gone on between the clubs. I don't have a clue." Jol and Hughton were dismissed last night and Tottenham were today working to secure Sevilla coach Juande Ramos and United's Poyet as their replacement management team. United were still waiting for an official approach this morning but club chief executive Shaun Harvey said: &qu
Read more
- October 24, 2007
Yorkshire Post 24/10/07 Kishishev returns for second loan spell at Leeds By Richard Sutcliffe RADOSTIN KISHISHEV has returned to Leeds United on loan. The 33-year-old Leicester City midfielder has joined Leeds on an initial one-month loan deal after falling out of favour at the Walkers Stadium. Kishishev's return is a huge coup for Leeds manager Dennis Wise, who today celebrates one year in charge at Elland Road, with injuries troubling several of his midfielders. Alan Thompson and Andrew Hughes are among those who are doubtful for Saturday's meeting with Millwall and Kishishev could go straight into the side. The Bulgarian international spent the final two months on loan at Elland Road from Charlton Athletic last season and made a huge impression despite United being relegated. United wanted to sign the midfielder in the summer, but the lure of Championship football proved too great. Martin Allen's replacement by Gary Megson has, however, left Kishishev out of favour at t
Read more
- October 10, 2007
Yorkshire Post 9/10/07 Darlington 0 Leeds United 1 By Richard Sutcliffe A LOT has changed since Leeds United made the trip up the A1 to take on Darlington in a pre-season friendly on a warm July evening. Back then, the Elland Road club's very future was still in doubt with the Football League refusing to return their so-called golden share and the majority of fans in open revolt against Dennis Wise and Ken Bates. The unprecedented 15-point penalty was still a week or so away, but with the side that started the friendly against the Quakers featuring just five players who were then under contract to Leeds, the future looked anything but bright. Fast forward a little over two months, however, and the picture has changed somewhat. Not only is there now genuine hope that United's season could end in promotion, but the 2,828 fans who made the trip to the Darlington Arena last night were able to spend much of the closing stages singing about a possible trip to Wembley in the spring. P
Read more
- October 07, 2007 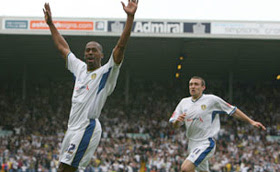 Independent 7/10/07 Leeds United 1 Yeovil Town 0: De Vries makes mark in another Leeds late show By Jon Culley at Elland Road Published: 07 October 2007 The League One table in the Leeds programme shows how it would look had the fallen giants of Elland Road not been docked 15 points, under which reckoning Dennis Wise's team would have 28 points and lead by nine after stretching their unbeaten start to 10 games here yesterday. In reality, they looked anything but runaway leaders against a Yeovil side who will believe they should have won. Yet out of their troubles Leeds have acquired the enviable knack of playing moderately yet stealing victory at the death and the habit was maintained when substitute Mark de Vries headed home Jonathan Douglas' cross after 89 minutes. The on-loan Leicester striker's first goal for Leeds was the eighth Wise's team have scored inside the last five minutes so far this season, transforming draws into wins in five games. The Leeds team had be
Read more
- October 04, 2007 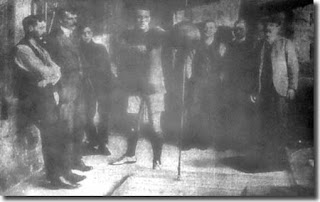 New pages uploaded at mightyleeds.co.uk Seasons – 1910/11 – Play up, Ireland!/Mediocre, dull and uninteresting Frank Scott-Walford brings in more Irishman, but City get off to a dreadful start before recovering to achieve their best finish under the manager but it's a lacklustre season Read the full story at http://www.mightyleeds.co.uk/seasons/191011.htm http://www.mightyleeds.co.uk/seasons/191011part2.htm http://www.mightyleeds.co.uk/seasons/191011fix.htm
Read more
- October 04, 2007
Yorkshire Evening Post 4/10/07 Dennis Wise wins manager award By Phil Hay Leeds United boss Dennis Wise has been named League One's manager of the month for the second month running. Wise collected the accolade for September after guiding United to four victories and a draw from their five league games last month. The run of form, which has left United unbeaten after nine league matches this season, wiped out their 15-point Football League penalty and lifted the club out of League One's relegation places. Tuesday night's 1-0 win at Oldham Athletic moved Wise's players up to 10th position, four points short of the play-offs. The 40-year-old was previously declared the division's manager of the month for August after four wins from five games during the first three weeks of the term. Wise's squad will be strengthened this weekend by the return of strikers Jermaine Beckford and Tresor Kandol from suspension, but United are waiting anxiously for news on Tore Andre F
Read more
- October 01, 2007
Yorkshire Evening Post 1/10/07 Strikers in at the double for Leeds United By Phil Hay Leeds United have averted a serious selection crisis by signing strikers Mark De Vries and Wayne Andrews on one-month loans. Andrews accepted a transfer to Elland Road from Coventry this morning and Dennis Wise moved to tie up a deal for Leicester's De Vries at lunchtime after United's 1-1 draw with Gillingham on Saturday left him without a fit senior forward in his squad. The stalemate at Priestfield cost United their 100 per cent start to the League One campaign, denying the club a record-breaking eighth straight win, and red cards for Tresor Kandol and Jermaine Beckford created a critical shortage of players ahead of tomorrow's night's clash with Oldham. Kandol and Beckford were dismissed for two bookable offences by referee Danny McDermid, giving Leeds no right of appeal, and both strikers will serve a one-match suspension during the league fixture at Boundary Park. The strike par
Read more
More posts