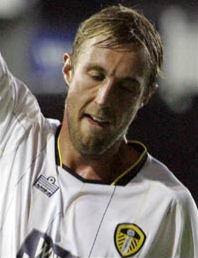 Hulse hat-trick lifts Leeds but fans continue Bates boycott Louise Taylor at Elland Road Thursday September 29, 2005 The Guardian With Ken Bates using his Chairman's View column in the programme to bemoan Leeds's recent inconsistency, Kevin Blackwell's position might conceivably have been in jeopardy had they lost here. Instead the home manager was left basking in the kudos engendered by Rob Hulse's first-half hat-trick and some exhilarating left-wing play from Eddie Lewis as Leeds emphasised their promotion credentials. The only shame was that Bates's insistence on raising ticket prices dictated that it was watched by a mere 18,353, Elland Road's lowest league crowd for 16 years, which was arguably one of the reasons why Blackwell body-swerved the post-match press conference. "I understand it's difficult for some fans and it was a filthy night," said Sam Ellis, Blackwell's assistant. "But I'd sooner give credit to those that do co
Read more
- September 28, 2005 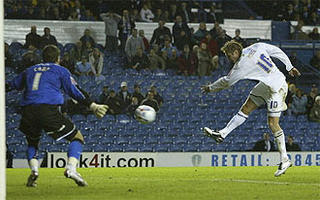 Leeds 3 Derby 1 leedsunited.com Pre-Match United boss Kevin Blackwell reacted to the defeat against Ipswich by making one change to his starting line-up. Gylfi Einarsson was the man who made way with Frazer Richardson coming back into the side after being left out for the past three league games. Derby included former United midfielder Seth Johnson - released just over a month ago - who was understandably keen to do well against his former employers. The Match United missed a penalty on Saturday against Watford and they should have had an opportunity to make amends after just three minutes. Richard Cresswell chased a ball knocked forward that the Derby keeper Lee Camp made a rash decision to come out for and completely misjudged. There then ensued a three-way chase for the ball with the keeper, Rams defender Michael Johnson and Cresswell. It ended with Cresswell being clattered to the ground but no penalty was the decision. Jonathan Douglas had United's first shot on goal but i
Read more
- September 25, 2005 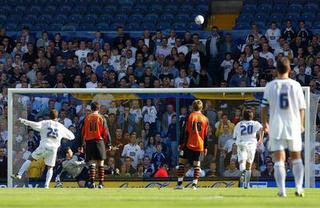 Leeds 0-2 Ipswich bbc.co.uk Sam Parkin was on target twice to shatter Leeds' unbeaten home record. Ipswich's £550,000 buy from Swindon struck after 29 minutes, finishing in style from Dean Bowditch's cross. Leeds wasted a chance to equalise two minutes before half-time, but Richard Cresswell's penalty hit the bar after Jim Magilton fouled Shaun Derry. Ipswich then defended strongly before Parkin scored again in the 70th minute, as he strode on to a loose ball to confidently beat Neil Sullivan. Leeds boss Kevin Blackwell:"You can be critical about the finishing, but it just wouldn't seem to drop. "When it did the goalkeeper made a great save or the bar and the post were in the way. But we played well and put Ipswich under a lot of pressure. "Despite all the effort, the lads have got nothing to show for it. On another day we'd have won comfortably." Ipswich boss Joe Royle:"I came here with Oldham many, many times and I can't remembe
Read more
- September 22, 2005

United boss left spoilt for choice Yorkshire Evening Post Leeds United's strikers are the envy of their rivals. PAUL DEWS talks to Kevin Blackwell about the potent threat of his illustrious list of marksmen ASK Kevin Blackwell if he has an embarrassment of riches up front and he will baulk at the question. Having spent almost £4m on acquiring five top marksmen over the past 10 months, Blackwell is the first to insist that the abundance of striking talent at his disposal is far from embarrassing. In one corner, he has the physical, workaholic presence of Rob Hulse and Richard Cresswell. Two strikers capable of bullying defenders, dominating defences, and both possess natural predatory instincts. In the other corner, Blackwell has pint-sized duo David Healy and Robbie Blake. Two pocket terrors with frightening pace, movement, and the ability to conjure something out of nothing. Then, somewhere in the middle, Blackwell has Ian Moore. A natural worker of a striker with a good goalsco
Read more
- September 22, 2005 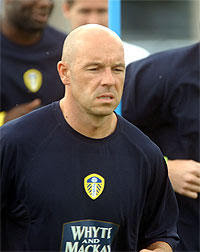 Long Wait Ahead For Stone leedsunited.com United boss Kevin Blackwell has ruled out any hope of having injured winger Steve Stone available soon. The 34-year-old has yet to make his Leeds debut since arriving in the summer on a free transfer from Portsmouth after suffering an Achilles injury during pre-season training. Although no firm date has been set for his return, Blackwell does not anticipate him being back in the next two months. "At his age the rate of tissue regeneration is much slower," said Blackwell. "The body doesn't heal as quickly so it's a matter of being patient with him. He's getting the best physio care at the club but once he's able to train again he will need to spend time getting his fitness back."He was desperately unlucky to suffer the injury so early on but hopefully he will still play a big part for us this season."
Read more
- September 20, 2005 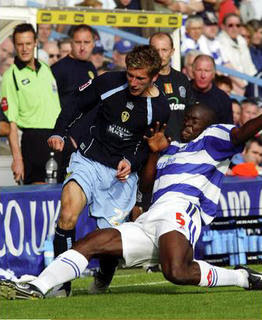 Rotherham 0 Leeds 2 leedsunited.com Pre-Match United boss Kevin Blackwell made five changes for the tie against Rotherham at Millmoor. As he had promised, a number of players who don't normally get their chance in the league, were given starting berths and perhaps another chance to force their way into the first team reckoning. Danny Pugh, Matthew Kilgallon and Ian Moore all came in whilst Richard Cresswell got his second start upfront. Frazer Richardson was also handed a place in the starting XI against his home town club, having just recovered from the virus that kept him out of the win over QPR. Rotherham boss Mick Harford stuck with the same side that lost at Nottingham Forest at the weekend, and like Leeds, used a 4-4-2 formation. The Match Leeds put the pressure on the Millers from the start, getting two early corners and then a blow for the home side when captain Phil Gilchrist was forced off with a head injury. All inside the opening five minutes. Rotherham were the fi
Read more
- September 17, 2005 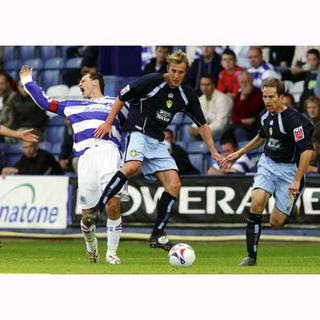 QPR 0 Leeds 1 leedsunited.com Pre-Match United boss Kevin Blackwell has made just one change to the side that lost with Sheffield Wednesday at Hillsborough. Rob Hulse returns in place of Richard Cresswell, with the striker having recovered from a bug that swept through the training camp earlier in the week. The MatchThere was a moment of concern early on for Leeds when Neil Sullivan hammered a clearance against Rangers striker Paul Furlong, but fortunately the United keeper got the lucky break and was able to clear the ball. Leeds were presented with a gilt-edged chance after just seven minutes, and really should have been ahead. Healy played a defence splitting ball up to Lewis making the run on left and the winger delivered a great ball across the face of goal between the keeper and his defence. Rob Hulse missed it but Jonathan Douglas looked set to tap it home but only managed to hammer it over from four yards out. If Leeds should have been ahead in the first ten minutes, then QP
Read more
- September 11, 2005
Leeds 3 Brighton 3: Healy repeats heroics Sunday Times 11/9/05 Norman Hubbard at Elland Road FROM Northern Ireland’s hero on Wednesday to Leeds United’s saviour on Saturday, it has been a memorable week for David Healy. The Ulsterman scored a second-half brace to bring Leeds level and then supplied the shot that led to Jonathan Douglas’s late equaliser. But as a rueful Kevin Blackwell admitted, Healy could have won the game on his own. “We had enough chances to sink a battleship today and they just didn’t go in,” the Leeds manager said. “David Healy’s had three one-on-ones and we’ve hit the bar three times.” But for the agility of Brighton goalkeeper Wayne Henderson, who is on loan from Aston Villa, Healy could have had a hat-trick within the opening eight minutes. So it was against the run of play when Knight scored his 50th league goal to break the deadlock, touching in Sebastien Carole’s cross. Their second goal was a role reversal, Knight picking out the former Monaco man for a c
Read more
- September 11, 2005 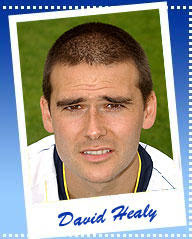 Leeds draw on Healy heroics Leeds Utd 3 - 3 Brighton Spencer Vignes at Elland Road Sunday September 11, 2005 The Observer Kevin Blackwell knows a thing or two about managing with the bare bones. So when the Leeds boss describes Mark McGhee's job as 'difficult beyond belief' you tend to believe him. 'Brighton have got to take their hat off to Mark because you hate to think where they would be without him,' said Blackwell, who took over a club with debts of around £120 million when he came to Leeds last summer. 'It must be so frustrating because he knows what he wants to do, and how to do it, but he can't actually go ahead and do it because of the situation the club is in.' It certainly can't be easy being McGhee, forced to sell his best players to fund Albion's long-running campaign for a new stadium on the outskirts of Brighton at Falmer. Survival should be the name of the game. Yet despite everything the Scot has built a tidy side capable on
Read more
- September 09, 2005 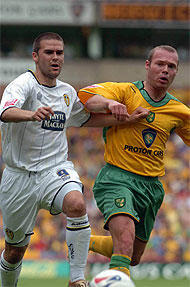 Boss Faces Healy Decision leedsunited.com David Healy is back down to earth with Leeds after his heroics for Northern Ireland On Wednesday, but the question on the lips of supporters is will he start against Brighton? The United striker may have propelled himself into the spotlight with his goal against England but that does not guarantee him a place in Kevin Blackwell's starting XI on Saturday. In fact the Northern Ireland ace was left out of the first XI after the previous round of international games, with Blackwell wary that the games may have taken too much out of him to be at his best for Leeds. Blackwell hinted the 26-year-old would keep his place in the team and says it is great to have Healy 'buzzing' after his history making moment. "David has gone into that game (against England) on the back of decent performances for us, and I would have thought that if he doesn't come back from this full of confidence then he never will," said Blackwell. "
Read more
- September 03, 2005 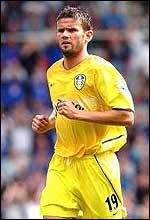 Bakke exits to join O'Leary Leeds midfielder completes loan switch to Aston Villa Yorkshire Post Ian Appleyard EIRIK BAKKE last night quit Leeds United for a reunion with his former manager David O'Leary at Aston Villa. The Norwegian midfielder, pictured right, will spend the next four months on loan at the Premiership club – saving Leeds around £450,000 in wages.His departure also severed the last remaining link between the current squad and the side O'Leary led to the last four of the European Champions League just four years ago. Although defender Gary Kelly remains on the books, he was only on the bench when Leeds lost 3-0 to Valencia in May 2001.Striker Michael Ricketts, another high earner, was also shipped out on loan by manager Kevin Blackwell – joining Championship rivals Cardiff City until January 3. The one-time England international endured a desperate first season at Elland Road after leaving Middlesbrough but scored in last week's Carling Cup victory ove
Read more
- September 03, 2005 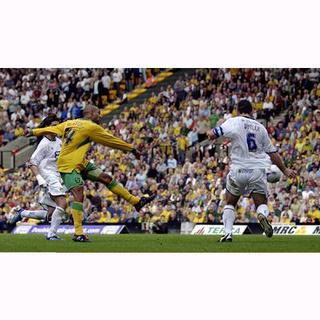 Norwich 0 Leeds 1: Leeds on upward curve Sunday Times Paul Rowan at Carrow Road FIVE games into the Championship and Leeds are well into their stride, with three wins and only one black mark against them. Their projection of returning to the Premiership within three years is now looking far less fanciful than it did at the beginning of the season. Leeds lie fourth this morning whereas relegated Norwich, without a win in the Championship this season, find themselves fourth from bottom. NI_MPU('middle'); There is nothing particularly pretty about the way Leeds play, but in Rob Hulse they appear to have a centre-forward worth chanelling their energies and resources into. Hulse scored the winner yesterday and generally outmuscled the Norwich defence. He was also booked for landing an elbow in the face of young Norwich defender Jason Shackell. “He broke his nose with the first elbow,” Norwich manager Nigel Worthington said afterwards with a smile. “Then he straightened it with the
Read more
More posts