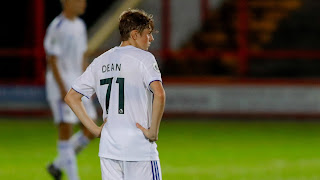 After winning the divisional title last season, the Jacko Generation have been struggling for results in Premier League 2 Division One. Before this week they were near the table’s foot with just three wins, and only one win in any competition since beating Liverpool 4-0 on 19th September.

Apart from the distant memory of winning, that game is best remembered for Joffy Gelhardt making himself impossible to ignore. Scoring from halfway will do that kind of thing, especially if you follow it by skipping through tackles and smashing a dipping, swerving, powerful shot that with loads of power dips and swerves over the goalkeeper into the top of the net. From about thirty yards, maybe more. Goal of the season, for Leeds Under-23s, for Leeds United Football Club, for football, for anywhere in the world? Yes to all of the above.

That goal’s status was secure until things changed in the last five days on planet Jacko. Marcelo Bielsa recently acknowledged that the injury crisis in his first team has made things tough for Under-23s coach Mark Jackson: “It’s a request from me to the U23s coach,” to rob all his good players, “that deteriorates the performance of his team.” Nine defeats in fourteen games sounds about right. Last week, our Rob covered the most recent league defeat, to West Ham’s Under-23s, you know, the ones David Moyes would sooner puke himself to tears than use in the FA Cup. But on Friday, amid the pie sandwich factories of South Ribble, Leeds reignited their season with a Premier League Cup win over 100 per cent group leaders Wigan Athletic, and started giving Joffy some competition for his Puskas Award contenders.

Nohan Kenneh started things when Amari Miller’s cross was cleared to the edge of the box, where our defensive midfielder controlled the ball on his chest, watched it drop, and volleyed it low and hard inside the post. It’s a great goal with points only lacking for its finishing aesthetics — the ball really needed to be cracking in off the crossbar if it wasn’t too much trouble. But in the context of United’s season, any sort of lead after only ten minutes was very welcome. Wigan’s Tom Costello equalised before the half-hour mark just to emphasise that point.

Midway through the second half, though, seventeen-year-old Max Dean won the match and the viral clip contest when he changed the tone of some carefully constructed Leeds possession with a sudden nutmeg. With space to burst into, Dean declined, strolling instead, then lofting the football precisely from where he was, nearly thirty yards from the line, to the top corner of Wigan’s goal. It was a beauty befitting the venue, the County Ground in Leyland; the brick wall behind the goal forms one side of the British Commercial Vehicle Museum, home to interactive displays of old horse-drawn carriages, fire engines and delivery trucks, a lorry driving experience for children, plus a gift shop. They should make a new exhibit because Max Dean’s goal hit Wigan like an eighteen wheeler full of pies!

Not only was it a great goal but this was joyful new territory from Dean, an Ormskirk lad not far from home. Until now he’s been making his name with aggressive short range finishing, a thirst for fighting and some barely hinged celebrations of good goals and tantrums after bad misses. Anyone with fond memories of teenage Alan Smith squaring up to all of Arsenal’s players for no reason in the late 1990s will want to see this kid in the first team as soon as possible. With so many injured players ahead of him, it’s surprising Dean has yet to make a first team bench, but maybe Jackson has been begging Bielsa to spare him just one.

That got Leeds back to winning in the Cup. This Monday night, what’s left of Derby County hitchhiked to York for a bottom of the table clash, and Amari Miller set about them with Gelhardt and Dean’s best efforts on his mind.

That’s how you start a game. Actually, that’s not how Leeds started the game: Stuart McKinstry went off looking badly injured within quarter of an hour, and in less than a minute his replacement, Archie Gray, was knocked badly enough by a heavy tackle he went off at half-time. But you could have guessed all that because it’s Leeds. Enjoy, instead, Miller on the half hour, getting the ball after Leeds moved it sharply across the pitch, then cutting in from the right, dropping a shoulder, and swinging a top notch curler into the far corner, like a more intense version of Dean against Wigan, but a goal all his own.

Gelhardt, Dean, Miller: what the kids do for Jacko from long range feels like the one thing missing from the first team. We don’t get spectaculars too often from Bielsa’s bigger boys. We get beauty, like Raphinha sliding the ball through West Ham’s defence for Jackie Harrison’s hat-trick on Sunday, which was like Pablo Hernandez sliding the ball through Stoke’s defence for Stuart Dallas in the promotion season. When the first team are on song, they’re elegant. But it’s rare to see a swerving dipping long ranger hitting the top corner from a speculative angle.

Are the first team too mature for that sort of thing, grown out of all the Soccer AM stuff? Forshaw, Dallas, Ayling, Cooper, Bamford, even Harrison at the younger end: they all impose themselves like responsible lads keeping order so the stag do doesn’t get too rowdy. Stuart Dallas will always apologise for bothering the next table, Adam Forshaw will appease the bouncer and get Raphinha into a cab. If the Leeds Dads had a team motto it’d be, ‘Look, mate.’

It’s only in the Under-23s where the heavy responsibility of representing Bielsa’s Leeds in the Premier League is yet to trample impetuous, precocious youth. There’s nothing at stake if Amari Miller misses the top corner from thirty yards, and everything — fun — to gain.

Okay, not quite nothing at stake. Leeds could lose their Division One status if results don’t pick up, and go back down to the division they won last season. This would be annoying but not disastrous. There are good academy teams at that level — everyone is Category One, they’re just split up for manageable fixtures and to introduce some competitive elements. Relegation in this league is as near to risk free as it could be, and as it should be when you’re a teen. Nobody at this age should be frightened out of being daring. The development squad players are there to make mistakes and learn from them, and to score absolute worldies and annoy all their mates by posting umpteen replays on their Instagram stories.

Leeds didn’t go on to dominate against Derby. They were fortunate to get away with the number of times they let second half crosses tempt the striking Rams, and it was a big relief when Charlie Allen got a second goal with seven minutes left. It was a big effort, too: not long before he’d taken a kick in a tackle and was getting treatment that looked likely to end with him going off and Leeds down to ten players. (Jack Jenkins was hopping around hurt at the same time, because after Firpo and Forshaw, synchronised injuries are United’s new trend.) In less than five minutes, though, Allen was finishing his celebrations by getting down on his knees and stretching out his screaming calves, after controlling Miller’s ball into the box and burying a snapshot for 2-0.

No Puskas Awards for that one, but the first league win for months and a leap over Derby and out of the relegation places will do just fine.