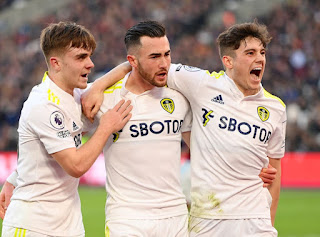 For Leeds’ threadbare squad, ravaged by injury and forced to resort to youth, a 3-2 victory over West Ham epitomised all their tenacious spirit. Jack Harrison’s clinical hat-trick, inspired in large part by the irrepressible Raphinha, staved off West Ham’s hopes of a comeback and dealt a significant blow to David Moyes’ side’s top-four hopes. In truth, though, the Scot can have few complaints.

Bearing the toll of a third game in seven days and, perhaps owing to their victory when these two sides met in the FA Cup third round only last weekend, West Ham were unusually sloppy and sluggish throughout. And as effective as Leeds were on the counter-attack, chasing after every ball with the absolute dedication Marcelo Bielsa demands, West Ham will know much of their plight was self-inflicted. That will, of course, matter little to Leeds. These three points will provide – if only temporarily – a welcome buffer against being sucked into the relegation battle, and will no doubt be held up as an example of their bravery on a day clouded by the controversial postponement of the north London derby.

There may still be a strong suspicion that Leeds’ unique brand of “murderball” is the root cause of their injury crisis and wearying form but, despite Patrick Bamford’s continued absence, it was they who began with a vigour and intent that seemed to catch West Ham completely off-guard. In fact, for the opening 10 minutes the home side were virtual bystanders, barely able to string a series of passes together, and Leeds were well worthy of their early lead.

The goal itself epitomised West Ham’s unusual slackness. As Moyes scowled angrily in his technical area, a simple ball over the top set Raphinha free down the right wing. The Brazilian’s cut-back found Mateusz Klich on the edge of the box and although Lukasz Fabianski was equal to the shot, his parry only went as far as Harrison, who fizzed a shot back across the face of goal and into the far corner.

The setback did at least act as a shot of adrenaline, finally rousing West Ham from their virtual comatose. And their newfound momentum was exacerbated by yet more Leeds misfortune. Within the space of a minute, Adam Forshaw and Junior Firpo both pulled up with injuries, forcing Bielsa to hand Premier League debuts to both Lewis Bate and Leo Fuhr Hjelde. The pressure built and before long West Ham began to better resemble a side fighting for their place in the top four. Leeds failed to heed the warning when Craig Dawson contrived to miss a header from point-blank range and, from the following corner, Jarrod Bowen found himself unmarked and angled his attempt with far more precision into the far corner for his sixth goal of the season.

At that stage, it seemed as though West Ham’s quality would become overwhelming. But just as they moved into another gear, Leeds punctured the momentum entirely. From a corner of their own, Luke Ayling rose highest and the ball bounced tantalisingly across the six-yard box where Harrison reacted first to bundle it in off his thigh.

It left the game finely poised, with a tiring Leeds side deprived of options and condemned to defend for the long haul. Their resistance only lasted seven minutes. Michail Antonio did well to keep Declan Rice’s angled pass under control and flicked a pass through to Pablo Fornals. The Spaniard jinked inside onto his right foot and struck a low shot towards the near post that wrong-footed Illan Meslier.

But for West Ham, it proved to be yet another false dawn and again, much of the damage was self-inflicted. Nikola Vlasic was robbed of the ball inside his own half, Raphinha skipped away and weighted a pass perfectly into the path of Harrison. Fabianski rushed out well but the finish was exquisite, a deft chip over the goalkeeper that completed a clinical hat-trick. It was everything Leeds had deserved, their tenacity taking advantage of West Ham’s unusual carelessness.

It should have been four, if only for another stroke of bad luck. First Raphinha’s free-kick struck the woodwork and then, as West Ham became stretched chasing an equaliser, they were split open on the counter-attack. Raphinha was the spark yet again, weaving down the right before finding Klich lurking on the edge of the box. His shot cannoned into the net but not without clipping Rodrigo, who was crouched on the goal line.

The reprieve handed West Ham a lifeline, but their own celebrations were cut short. Meslier made a fantastic double save to deny Vladimir Coufal and Bowen but could do nothing to prevent Andriy Yarmolenko’s header from looping over him and into the net. The linesman quickly raised his flag, and few could begrudge Leeds their own moment of grace.

They would come to rely on far more, though. In the final move of the match, Antonio’s deflected cross found Bowen totally unmarked inside the six-yard box. There was no other player West Ham could have wished the chance would fall to and yet, with the goal gaping, Bowen’s attempt to cushion it in with his chest instead had the spring of a trampoline. The ball sailed over the crossbar and Leeds could catch their breath at last, albeit after a long sigh of relief.