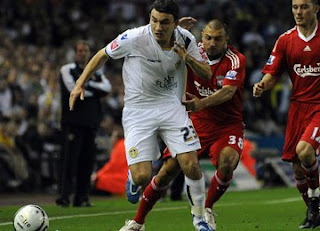 Times 22/9/09 David Ngog crushes Leeds hopes that past glories might be rekindled Leeds United 0 Liverpool 1 Tony Barrett The gulf between the clubs may be greater than ever — their time as rivals competing on an even footing having long since passed — but a match between Leeds United and Liverpool remains one of the most keenly contested in English football. Separated by two divisions but brought together by the Carling Cup, a second-half goal by David Ngog, the Liverpool forward, was all that split the Barclays Premier League title contenders from the Coca-Cola League One hopefuls. “It was as tough a game as we have had all season,” Jamie Carragher, the Liverpool defender, said. “It was a great performance by Leeds and they’ve been a little bit unlucky that we’ve won.” Simon Grayson, the Leeds manager, believed that the match’s outcome was determined by two decisions made by Alan Wiley, the referee. A “goal” by Jermaine Beckford was ruled out for offside, while Wiley took no punitiv
Read more
- September 20, 2009 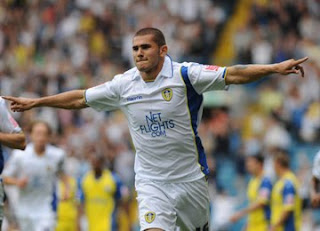 Leedsunited.com 20/9/09 GAFFER - TOP'S THE PERFECT BOOST United boss delighted with pole position... United manager Simon Grayson said going top of League One was the perfect boost for his side ahead of Tuesday's Carling Cup distraction against Liverpool. United warmed up for the sell-out clash with Liverpool by romping to a 4-1 Elland Road win against Gillingham on Saturday. Bradley Johnson scored twice before Jonny Howson and Jermaine Beckford put the seal on United's biggest win so far this season. And with Charlton being hit by a late equaliser at Norwich City, United moved two points clear at the top of the league. "We're delighted to go top," said the manager. "It's still very early days, but it's nice to be there and it's nice to be in front. "The main thing is staying up here and maintaining the standards we have set, and hopefully staying ahead of the pack. "Being top of the league gives us a boost going into Tuesday'
Read more
- September 12, 2009 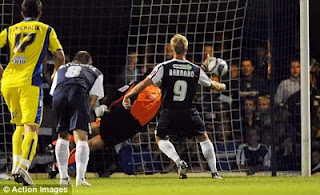 Yorkshire Evening Post 12/9/09 Spot on Shane saves United By Phil Hay Roots Hall maintained its tight grip on Leeds United on an evening which reminded the club of the resistance League One is capable of mustering. A fixture mooted as the most difficult of their season to date lived up to that billing as Leeds' flawless record of eight straight wins ended in predictable surroundings. Two-and-a-half years and three matches after their first visit to Southend, the club are still awaiting their first victory there. How soon they will return to Roots Hall in the future is a matter of opinion after a draw which took Leeds one point clear at the top of League One last night, comfortably in control of their season and their long-term prospects. Since their descent into League One in 2007, Leeds have been beaten on both of their appearances in Southend, a record that was spoken about repeatedly before last night's match. That United survived the concession of a second-half penalty – s
Read more
- September 01, 2009
Yorkshire Post 1/9/09 Boyhood fan Bromby can go 'home' to play big part for Leeds United By Ian Appleyard SHEFFIELD United have completed the sale of defender Leigh Bromby to Leeds United with manager Kevin Blackwell admitting that it would have been wrong to stand in his way. Dewsbury-born Bromby, a boyhood Leeds supporter, was frustrated by his lack of opportunities with the Blades after returning for a second spell at Bramall Lane, initially on loan, eight months ago. "Unless it was going to be to the detriment of this football club, I would not deny anyone an opportunity to speak to Leeds United," said Blackwell. "Leigh has found it hard to break into the side because of Matt Kilgallon and Chris Morgan and was getting frustrated." Leeds manager Simon Grayson, who is paying around £300,000 to acquire the 29-year-old, said: "We're delighted to get things agreed with Leigh. "He has good experience in the Championship and he will become a valu
Read more
More posts