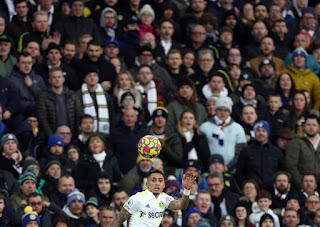 Eddie Howe has said he does not know whether he will meet Mohammed bin Salman in Jeddah next week but any conversation with Saudi Arabia’s de facto ruler is bound to be considerably easier after this win.

Newcastle’s manager is taking his players to a warm-weather training camp on the Red Sea coast on Sunday but at the final whistle he resembled a man feeling the sun on his back for the first time after a long, hard winter.

An amalgam of Jonjo Shelvey’s second-half free-kick and a rare mistake on Illan Meslier’s part secured Newcastle their second win of the season, lifting them to the heady heights of 18th place. They have a mere 15 points but are one short of Norwich, four shy of Everton and seven behind Leeds; suddenly one of the Premier League’s greatest escapes look feasible.

Marcelo Bielsa’s alternately despairing and infuriated body language highlighted the severity of this blow to his team who, not for the first time, failed to turn dominance into goals before coming undone at a set piece. Patrick Bamford’s long-awaited return to the Leeds attack after injury cannot come soon enough.

“It was an opportunity we didn’t take advantage of,” said Bielsa, who accused Newcastle of time-wasting tactics. “We had many moments to unbalance the game but we could not convert. We always got to the final third with ease but could not pick the final pass.”

Howe, meanwhile, was busy remembering how to smile. “It was a big test and a massive win,” he said. “We hope it’s a turning point.”

Initially, such a watershed appeared unlikely. Only a fine point-blank save from Martin Dubravka kept an early Dan James’s shot out after a wonderfully fluid attacking move featuring Rodrigo and Raphinha as Leeds persistently dissected Newcastle with the ease of a knife slicing through butter. Paul Dummett is an underrated, positionally intelligent, left-back but he joined a long line of counterparts who have struggled to contain Raphinha.

The resultant shortage of crosses left the one-time Leeds striker Chris Wood largely isolated, with his side’s principal hope of a goal hingeing on an odd bright counter-attacking moment, which concluded with Meslier doing well to save Shelvey’s volley.

Although Newcastle still need a midfield enforcer capable of anchoring the team effectively, Shelvey had one of his better games with most of Newcastle’s attacking manoeuvres stemming from the playmaker’s feet.

In Bamford’s enduring absence, Leeds could not make their dominance and dynamism count and had no one to polish off Raphinha’s deliveries. Jack Harrison should probably have given them the lead but allowed Fabian Schär, who made some vital interceptions, to block his shot and for all their slickness and quickness the home side failed to work Dubravka hard enough.

If Newcastle invariably looked in trouble whenever Leeds moved the ball wide, Bielsa became agitated every time Allan Saint-Maximin assumed possession. It was far from Saint-Maximin’s finest hour but he still fazed a Leeds side unable to capitalise on Jamaal Lascelles’s vulnerabilities. Newcastle’s captain has not been at his best lately and he forfeited possession too many times for comfort. Indeed, he limped off after apparently pulling a hamstring attempting to retrieve one such concession near the halfway line.

By then Newcastle had already lost Joelinton and Dummett to injury but, for once, their luck was not entirely out. When Diego Llorente dragged back the overlapping Javier Manquillo, on for Dummett, Leeds conceded a free-kick in a dangerous position, just outside the area. Shelvey bent the ball low and its subtle curve evaded the previously assured but horribly wrong-footed Meslier who, having fallen for the deception, could only parry the ball into the back of the net.

In-between these highlights, Newcastle infuriated Bielsa by slowing the game down at every opportunity.