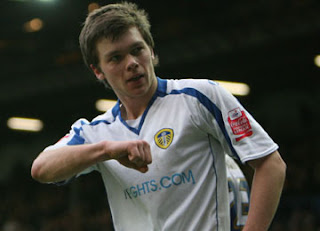 Yorkshire Post 21/2/09 Howson grabs Leeds 2-0 victory at Cheltenham By Chris Waters TWO goals by midfielder Jonathan Howson earned Leeds United a 2-0 victory over bottom club Cheltenham. Howson opened the scoring in the 54th minute when he headed home powerfully from 12 yards following a right-wing cross by Andrew Robinson. And he doubled the advantage in the 65th minute when he fired home left-footed from 15 yards after latching on to a clever through-ball by Fabian Delph. The victory was Leeds's fourth in succession at Elland Road and reignited their play-off hopes following successive defeats to Huddersfield and Hereford. Howson's opener followed long periods of domination by Simon Grayson's men, who did everything but score during the opening 45 minutes. Jonathan Douglas, who returned to the team after a one-match ban, headed against the woodwork in the 26th minute, while Robinson - who enjoyed a splendid game in midfield - struck the post just before the interval foll
Read more
- February 21, 2009
Yorkshire Evening Post 19/2/09 I understand fans' reaction By Phil Hay Leeds United manager Simon Grayson has sympathised with the supporters who berated his players at Hereford United on Tuesday night, admitting they were justified in voicing their frustrations during and after the club's 2-0 defeat. Grayson was left mystified by a performance which inflicted fresh damage on United's league position and brought chants of protest from the travelling fans in Hereford, and he urged his team to take heed to the vociferous complaints aired at Edgar Street. Tuesday's loss was the fourth of Grayson's short reign as Leeds boss but by far the most damaging, coming against a team who have struggled throughout this season and lie third from bottom in the League One table. The 39-year-old echoed the thoughts of United's 1,903 supporters at Edgar Street by declaring the club's display "unacceptable", and he insisted he would not take issue with any of the fa
Read more
- February 14, 2009
Yorkshire Evening Post 14/2/09 Clarke header sinks Whites By Phil Hay Huddersfield Town 1 Leeds United 0 For the third time in succession, Huddersfield Town cut down Leeds United with a victory which may prove infinitely more precious than their previous two. A Nathan Clarke header after only 16 minutes decided a predictably full-blooded West Yorkshire derby at the Galpharm Stadium and maintained Huddersfield's recent dominance of their nearby neighbours, fuelling their prospects of qualifying for League One's play-offs. Six points behind sixth place before kick-off yesterday, the second derby of the season was one that Lee Clark, Huddersfield's manager, could not risk losing. How much value he would have seen in a draw is also debatable. In the end, Clarke's decisive finish secured a result of some importance. Town's last two wins over Leeds – in April and November of last year – came at times when the club were heading in no discernible direction, but yesterday
Read more
- February 10, 2009
Yorkshire Evening Post 10/2/09 Beckford class makes the difference By Phil Hay Aided by an early kick-off in Huddersfield, Leeds United have the opportunity to reassociate themselves with one of League One's top six positions on Saturday. That prospect would not have been worth the paper it is written on at the start of the season, when United's ambition went far beyond the play-offs, but eight weeks after the managerial transition from Gary McAllister to Simon Grayson, it is precisely where the club need to be. The chance to take that important step forward was presented to Leeds after their victory over Millwall last night, a game that Grayson hoped would start an ascent up the division which continues unbroken until the end of the term. Unlikely though it seems, 12 league matches have passed since Leeds were last able to call themselves a top-six club, as they may be able to do for a couple of hours on Saturday. United have been in similar waters before, against the same opp
Read more
- February 08, 2009
New pages uploaded at mightyleeds.co.uk Here’s the story of the two remarkable end of season double headers in 1970 against Celtic and Chelsea as United sought valiantly for the impossible treble. 1 April 1970 – United 0 Celtic 1 Dubbed the Battle of Britain, United met Celtic at Elland Road intent on building up a winning first leg lead in the European Cup semi final but it didn't work out that way as Stein's men shone Read the full story at http://www.mightyleeds.co.uk/matches/19700401.htm 11 April 1970 – United 2 Chelsea 2 United wiped out grim memories of their previous Wembley finals by turning on the magic against Chelsea, but even Eddie Gray's wonder show could not bring home the bacon Read the full story at http://www.mightyleeds.co.uk/matches/19700411.htm 15 April 1970 – Celtic 2 United 1 Billy Bremner scored a stunning equaliser for United in the cauldron of Hampden, but another mastro's performance from Jinky Johnstone inspired a winning Celtic
Read more
- February 06, 2009
Yorkshire Evening Post 6/2/09 Liam's still a Whites target By Phil Hay Simon Grayson has confirmed that Liam Dickinson remains a target for Leeds United despite their failed bid to sign the striker from Derby County earlier this week. Dickinson was denied a move to Elland Road when his proposed switch from Pride Park missed Monday's transfer deadline, but Grayson is set to use the Football League's emergency loan market to secure the 23-year-old's services later this month. Leeds and Derby agreed a deal which would have allowed Dickinson to join United on loan until the end of their League One campaign, but the transfer fell through after paperwork sent from Elland Road arrived with the Football League 14 minutes after Monday's 5pm deadline. The January window was the final opportunity for clubs in England to agree permanent transfers and long-term loans, but the Football League's flexibility in allowing short-term temporary deals to be struck outside that wind
Read more
More posts