Showing posts from June, 2007
Show All
- June 30, 2007
Leedsunited.com 28/6/07 STATEMENT A statement from chief executive Shaun Harvey in relation to the club's current views about the future and the effect any appeal may have. The 28 day period provided by statute during which objections to the creditors voluntary arrangement proposed in respect of Leeds United Association Football Club Limited can be considered expires next Tuesday July 3. The Proposal of a payment of one penny in the pound together with a further payment to Creditor of £5.0m in the event that Leeds United 2007 Limited becomes a member of the FA Premier League within the next five football seasons was approved by over 75% of the Creditors of the Company at the Creditors Meeting held on the 1st June 2007 and reconvened on the 4th June 2007. In the event of promotion the unsecured Creditors, excluding those who would not be entitled to receive a dividend payment or who have waived their rights, would receive a further payment of approximately thirty pence in the pound
Read more
- June 30, 2007 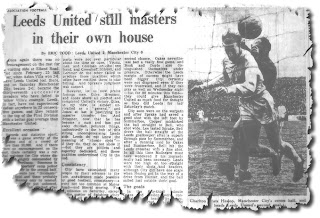 New pages uploaded at mightyleeds.co.uk Seasons – 1967/68 – The Revie effect/The cups that cheer After Harry Reynolds' retirement Don Revie leads his men through a marathon 66-match season as United finally put the champion runners up tag firmly behind them by securing two major trophies Read the full story at http://www.mightyleeds.co.uk/seasons/196768part1.htm http://www.mightyleeds.co.uk/seasons/196768part2.htm http://www.mightyleeds.co.uk/seasons/196768fix.htm
Read more
- June 23, 2007
Independent 22/6/07 Wise vows to 'get things right' at Elland Road By Jon Culley Published: 22 June 2007 With his recruiting plans limited by a transfer embargo and pre-season training only 10 days away, Dennis Wise may have been taking a closer interest than usual in the youngsters being coached as he was shown round a new inner-city sports facility in a run-down industrial area close to the centre of Leeds. The Leeds United manager, invited to open the £420,000 Barclays Spaces for Sport project at Hunslet Boys and Girls Club yesterday, admitted that he had already seen 10 potential targets slip through his grasp as he waits for a lifting of the block imposed by the Football League after relegated Leeds went into administration. "Players who are on frees or have turned down contracts get jittery and want things sorted out, they don't want to wait," he said. "We have earmarked players we want and asked them to be patient but there are a lot, maybe 10, who hav
Read more
- June 20, 2007 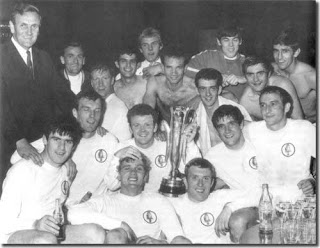 New pages uploaded at mightyleeds.co.uk Matches – 11 September 1968 –Ferencvaros 0 Leeds United 0 On a tense September evening in the magnificent Nep Stadium, Gary Sprake redeems himself from high profile mistakes earlier in the season to give the performance of his life Read the full story at http://www.mightyleeds.co.uk/matches/19680911.htm
Read more
- June 16, 2007 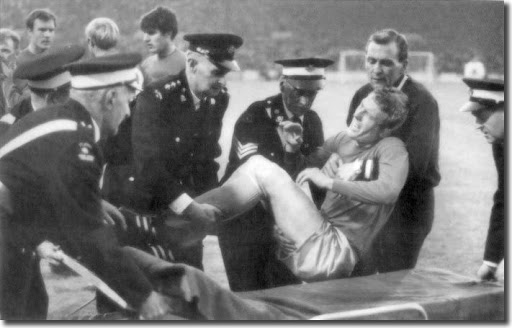 New pages uploaded at mightyleeds.co.uk Matches – 7 August 1968 –Leeds United 1 Ferencvaros 0 A year after being beaten by Dinamo Zagreb in the Inter Cities final, United were back and faced one of Europe's best in Ferencvaros - this time they got the advantage from the first leg Read the full story at http://www.mightyleeds.co.uk/matches/19680807.htm
Read more
- June 16, 2007
Daily Mail 15/6/07 Ridsdale is poised to lift lid on Leeds By CHARLES SALE All the signs are pointing to former Leeds chairman Peter Ridsdale writing a no-holds barred book about his time at the crisis club. Ridsdale, who was in charge at Elland Road from 1997 to 2003 in the heady period when the team reached the semi-final of the Champions League, is dismayed by continually being blamed for the club’s current demise despite having left more than four years ago. Leeds went into administration and were relegated to League One last season. Ridsdale, now chairman of Cardiff City, wants to put the record straight and his surprise appearance at the Nancy Dell’Olio book launch, as a guest of literary super agent Ali Gunn, suggests he is about to do so. Ridsdale already has links with Gunn through Five Live’s Ian Dennis, a close confidant during his time at Leeds. Dennis’s brother Steve, who works closely with Gunn, ghosted Princess Diana bodyguard Paul Burrell’s life story as well as Ashley
Read more
- June 13, 2007
Yorkshire Post 13/6/07 MP demands answers on Leeds United rescue deal By Rob Waugh EXCLUSIVE: Police are being urged to investigate whether criminal activity, including money laundering, was involved in the controversial financial collapse and immediate resurrection of Leeds United under the same owners. A Yorkshire MP has called on the Serious and Organised Crime Agency (SOCA) and the Serious Fraud Office (SFO) to probe the involvement of anonymously-owned offshore companies in forcing through the resale of Leeds, which had gone into administration, to a company represented by Ken Bates – even though it was claimed they had no connection with the club chairman. Phil Willis, a Leeds United fan and Liberal Democrat MP for Harrogate and Knaresborough, is highly critical of the way Leeds went into administration with debts of £35m and then was immediately resold to the same owners on the same day, subject to approval by creditors. The deal was voted through by creditors last week after
Read more
- June 10, 2007 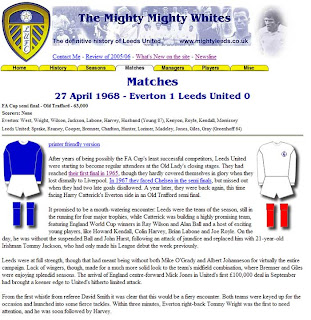 New pages uploaded at mightyleeds.co.uk Matches – 27 April 1968 – Everton 1 Leeds United 0 The Everton-Leeds Cup semi final at Old Trafford was a mouth-watering encounter, but for keeper Gary Sprake it was another game that he desperately wanted to forget Read the full story at http://www.mightyleeds.co.uk/matches/19680427.htm
Read more
- June 09, 2007 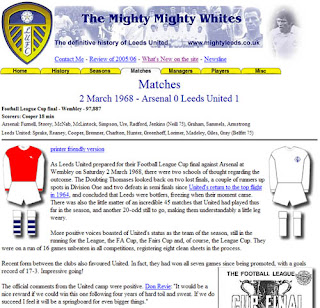 New pages uploaded at mightyleeds.co.uk Matches – 2 March 1968 – Arsenal 0 Leeds United 1 Leeds meet Arsenal at Wembley to contest one of the worst Cup finals ever - still, why should United care? They'd lost out on the big occasion before, and this one was all about winning Read the full story at http://www.mightyleeds.co.uk/matches/19680302.htm
Read more
- June 05, 2007
BBC 5/6/07 Bates promises Wise transfer cash Ken Bates has promised Leeds manager Dennis Wise sufficient funds to launch a strong start to life in League One. And the Elland Road chairman says the transfer embargo imposed on the club after it went into administration will not hinder their hopes next season. "I don't discuss figures, and never have, but Dennis will have funds available to him," said Bates. "We're in limbo slightly but that does not stop us talking to players formally and agreeing deals in principle." The Football League has confirmed that the embargo it imposed following the move into administration on 4 May is unlikely to be lifted until July. That delay will leave Wise with a month to rebuild his relegated squad ahead of the start of the campaign on 11 August. "We've already held lots of informal discussions, and Dennis has got a long shopping list," Bates added. "We actually sent him away on holiday while all this was g
Read more
- June 04, 2007
Yorkshire Post 4/6/07 Bates back in charge at Leeds By Richard Sutcliffe and Rob Waugh Ken Bates today regained control of Leeds after a recount of votes taken at last week's creditors' meeting confirmed his offer to buy back the club had been accepted by the slimmest of margins. Leeds' administrators KPMG were forced to adjourn a stormy meeting on Friday after deciding a recount was required to decide the club's immediate future. Some creditors argued Bates' offer to pay back money owed by Leeds was not the best on the table and claimed other parties interested in buying the club had not been given a fair chance. Bates, who placed Leeds in administration with debts of £35million on May 4, required 75% of the vote to have his offer of 1p in the pound accepted by creditors and the original count on Friday showed he had 75.02%. There were 27,178,255 votes in favour of Bates and 8,965,174 against giving him 75.20% of the vote. The future of the Elland Road club ha
Read more
- June 02, 2007
Morris increases bid for Leeds 02/06/2007 - 4:08:05 PM Property developer Simon Morris has increased his offer to creditors in a last-ditch attempt to thwart Ken Bates in the power struggle at Elland Road. Morris has today offered the club's creditors a 40p-in-the-pound deal in a desperate late bid to stop Bates from regaining control of Leeds. But although that compares favourably with Bates' offer of just 1p-in-the-pound, local property tycoon Morris is expected to be too late to win the creditors' support. Morris, who has already tabled £10m (€14.7m) to buy Leeds out of administration, said: "If we are successful in our bid to buy Leeds United, there will be 20p-in-the-pound for the creditors immediately, and a further 20p-in-the-pound for them over a period of time." Creditors voted by the slimmest of margins to accept Bates' offer to buy back the club at a stormy meeting yesterday, but it was so close administrators KPMG were forced to adjourn proceedings
Read more
- June 02, 2007
Telegraph 2/6/07 Bates bid for Leeds pays off By David Bond Ken Bates yesterday won his bid to buy back Leeds United, but only by the narrowest of margins. Following a stormy meeting at Elland Road, creditors owed £35million by the League One club agreed to support Bates's offer to repay one pence for every pound of the club's debt, by 75.02 per cent - just 0.02 above the figure needed to approve the deal. The result was so tight, however, that administrators from KPMG have adjourned yesterday's meeting until Monday while they double check the vote. Major creditors such as the Inland Revenue, who are owed £6m, are also understood to be considering how they can challenge the result of the meeting. But, according to sources, the recount is unlikely to alter the eventual outcome, leaving Bates and his financial backers free to start rebuilding the club with only a fraction of the debts they had just one month ago. A spokeswoman for KPMG said: "The creditors' meeting
Read more
More posts