Leeds United fell to an extremely disappointing 1-0 defeat at home to Newcastle United on Saturday - but what were the moments that the cameras might have missed?

The YEP's Lee Sobot picks out a few notable moments of action away from the contest on the pitch.

Before Saturday's contest had even started, a message to Prime Minister Boris Johnson was issued high up in the sky.

A plane flew over Leeds United's famous home with the message 'Boot him out', advertising the website StopBoris.com.

Crowds have been back to full capacity for some time now in the country's ongoing fight against coronavirus but United's supporters were not given the result they wanted to see against the Magpies. 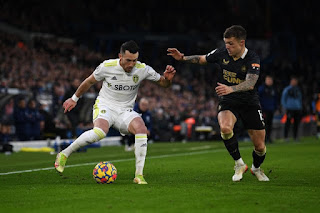 Bamford, both of whom are presently out injured.

But the Magpies have also recently recruited a current England player in Kieran Trippier and Southgate took his place in the Elland Road stands for the clash between the Whites and the Magpies.

Ultimately, it will have been Trippier whom the England boss would have been most impressed with - the right back locked in combat with Harrison down that side of the pitch - although United's Luke Ayling had a reasonably good game, not that the Three Lions are exactly short of right backs.

In the end, it was another Englishman in former international Jonjo Shelvey who netted the only goal of the game.

Whites head coach Marcelo Bielsa opted against making any changes during the half-time interval, despite Leeds having squandered good opportunities to take the lead.

It meant teen forward star Joe Gelhardt stayed on the bench upon his return from injury and the first change only arrived in the 71st minute as Tyler Roberts was instead brought on to replace Dan James.

Leeds then fell 1-0 behind four minutes later and Bielsa made his second change with ten minutes left as Gelhardt was finally introduced but for Klich whose frustration was clear as he came off.

The Pole booted a coat on the floor near the Whites bench after his withdrawal and it was hard not to feel for the midfielder who had a fairly good game in the middle of the park.

United's problems were not so much in that department but in the final third.

Bielsa admitted himself last week that Brazilian star Raphinha was United's best player and that was again the case against the Magpies.

The winger produced some fabulous pieces of skill and continually laid on chances but United were unable to take any of the opportunities on offer and worse still then fell to a 1-0 defeat.

The dejection of United's players was clear at the full-time whistle and Raphinha took a moment to reflect by crouching down to the floor as Newcastle celebrated a huge success in their battle to stay up.

Raphinha was then the last player to leave the pitch, applauding United's support as he exited the stage having also given his shirt to a young Whites fan in the stands, a classy touch.

The 25-year-old is a special, special talent but Leeds were unable to make the most of his attacking flair.