Showing posts from November, 2008
Show All
- November 30, 2008
Times 30/11/08 Histon humble Leeds in FA Cup second round Blue Square Premier promotion chasers Histon today secured a famous FA Cup upset with a stunning 1-0 victory over Leeds United, and earn a home tie with Swansea City in today's draw for the third round. Matthew Langston, a postman, scored the only goal of the game in the 39th minute at a wet and wild Glassworld Stadium when he headed in Gareth Gwillim's cross. And Leeds paid the price for poor finishing against a non-league team 42 places below them, just seven years after reaching the Champions League semi-finals. Histon dominated the first half in awful conditions and could have gone into the break further ahead, but they had to withstand a barrage of pressure in the second half. Lubomir Michalik twice came within a whisker of equalising for Leeds, first seeing his shot cannon back off a post then a fierce drive headed off the line by Jack Midson late on. "It was a magnificent rearguard action in the second half,&
Read more
- November 29, 2008
Leedsunited.com 26/11/08 CLUB STATEMENT 26 Nov 2008 Leeds United announce accounts show profit of... The directors of Leeds United Football Club Limited are pleased to be able to confirm that the audited accounts for the 14-month period to the 30th June 2008 show a profit of £4,553,000. During the period the club made an operating profit before player trading of £902,000 from a turnover of £23,249,000. On the field the club are seeking to gain promotion to the Championship at the earliest possible opportunity and to continue strengthening the club's Academy. Off the field, the directors have identified that the re-purchase of both the Thorp Arch Training Facility and Elland Road as a priority within the next 12 months. We are also seeking to gain planning consent for the development of the East Stand of the stadium to both increase income generated by the club on non-matchdays and improve matchday facilities for fans. We would like to thank the club staff and fans for their suppor
Read more
- November 23, 2008
Guardian 22/11/08 Delph delivers for Leeds Leeds 4 Hartlepool 1 Philip Dorward at Elland Road 'You're not famous any more,' is the most common chant sung by visiting supporters to Elland Road these days. It is a fair, if cruel, point, but it is also a brave punter who mocks the plight of Leeds, as Hartlepool found out. Gary McAllister's combative side showed that actions can speak louder than words. Not that Leeds fans aren't capable of speaking for themselves. 'Fabian Delph, he's not for sale,' is the song du jour among their supporters. But wily Leeds chairman Ken Bates has no plans for selling their latest prodigy - who scored a terrific goal in this game - to prying Premier League clubs. The canny West Yorkshire side recently secured Delph, who made his England Under-21 debut on Tuesday and turned 19 on Friday, on a long-term contract until 2012. There is a good chance that Delph will become famous sooner than his current club. That is not to say Le
Read more
- November 22, 2008 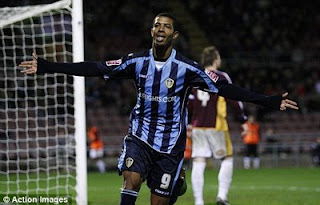 Yorkshire Evening Post 18/11/08 Jermaine gives the Cobblers the boot! By Phil Hay Northampton Town 2 Leeds United 5 Gary McAllister's least desirable scenario at Sixfields was a third defeat in succession for Leeds United. Close behind in his list of unwanted possibilities was an FA Cup first-round replay which dragged his tired squad through extra-time. Neither eventuality came to pass and no-one inside Northampton Town's stadium can have been happier to see last night's tie settled in United's favour by half-time. The club's 5-2 win over Northampton was their first victory in an FA Cup game for five seasons, but the priority for Leeds at Sixfields was not the improvement of slightly embarrassing history. After a League One defeat to Huddersfield Town on Saturday, the brief last night was to come safely through the tie and to do so with the minimum of fuss. Rarely has McAllister, in his guise as United's manager, looked as angry as he did after Huddersfield
Read more
- November 15, 2008
Yorkshire Evening Post 13/11/08 We're ready for step up – Kilkenny By Phil Hay Neil Kilkenny walked out of Pride Park on Tuesday night with the feeling that Leeds United are now equipped for a year in the Championship. But the Australian international says the club's performance against Derby County should not be seen as absolute proof of their ability to cope in England's second division. Leeds emerged from a 2-1 defeat to Derby in the fourth round of the Carling Cup with immense credit after outshining their Championship opponents for three-quarters of the game, but Kilkenny insisted the one-off tie would be quickly forgotten if United fail to follow it up with an equally convincing display against Huddersfield Town this weekend. United were given little time to reflect on Tuesday's narrow defeat – a result which obscured one of their most creditable displays of the season – with a West Yorkshire derby awaiting, and the club will potentially move to the top of League
Read more
- November 12, 2008
Leedsunited.com 12/11/08 PROUD OF YOU ALL 12 Nov 2008 Macca hails players and fans after Derby defeat... Gary McAllister hailed both the players and fans of Leeds United after Tuesday's Carling Cup fourth round defeat at Derby County. United fell behind to two early goals at Pride Park, but hit back to dominate the contest with a fantastic display of football. Luciano Becchio pulled a goal back before half-time, but for all the domination United were unable to find a second goal to level matters. "I didn't want to say how wonderfully we played and how we moved the ball around as a team, yet leave Pride Park having been beaten," said the manager. "We warranted something, extra time at least...They had four attacks at the most and scored twice. That is becoming our Achilles heel. "They were poor goals. Unforced errors. We hadn't been put under pressure. Teams aren't having to work for the goals at the moment. "But our possession was outstanding.
Read more
- November 12, 2008
B BC 11/11/08 Derby 2-1 Leeds Derby County qualified for the Carling Cup quarter-finals at the expense of Leeds thanks to first-half goals from Emanuel Villa and Nathan Ellington. Villa got the better of Lubomir Michalik and, with a curling left-foot shot, gave the home side an early lead. Ellington doubled the advantage with a simple tap-in after great work by Kris Commons before Luciano Becchio's header from eight yards halved the deficit. Leeds dominated after the break with Jermaine Beckford going close. It was an audacious 35-yard effort from Leeds' substitute striker and the shot would have left the backpedalling Roy Carroll red faced had it hit the target. The visitors twice came close to an equaliser either side of the hour mark, with Robert Snodgrass' curling free-kick clipping the outside of a post before Carroll was called into action to keep out Andy Robinson's well-struck 10-yard effort. But Derby held on to reach the last eight of the Leagu
Read more
- November 09, 2008 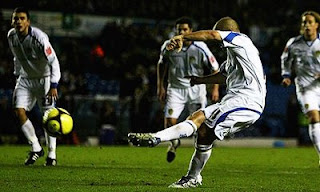 Guardian 7/11/08 Leeds' agonising wait for win in the Cup continues Guardian report Match facts FA Cup First Round Leeds 1 Northampton 1 The consolation for Leeds United is that they avoided the ignominy of becoming the first Football League club eliminated from this season's FA Cup . Yet in failing to overcome a Northampton side reduced to 10 men for the majority of the match, they extended their 5½-year wait for a win in this competition. Not since February 2003, when Leeds were accustomed to beginning their campaign in the third round, have they triumphed. With a replay at Sixfields to come, the second round would represent progress now. A simpler route towards Wembley appeared probable when Giles Coke was cautioned for the second time within the first half-hour and then Andy Robinson equalised from a penalty 10 minutes later. "It's a missed opportunity," said the Leeds manager, Gary McAllister. "Doom-and-gloom people will say it's a bad result bu
Read more
- November 06, 2008
Leedsunited.com 6/11/08 SQUAD LATEST  06 Nov 2008 Hughes available plus youngster handed squad number... United manager   Gary McAllister welcomes   Andrew Hughes back to his squad for Friday's FA Cup first round clash against Northampton Town. Hughesy has been sidelined with a groin injury, but will come back into contention as United square up with the Cobblers at Elland Road. Macca has also handed a squad number to young midfielder Josh Falkingham ahead of the first round tie. Rui Marques is still sidelined with injury and won't make the squad, while Alan Sheehan is also out with injury. The boss is hoping to welcome Sheehan back into training next week, although he insists he won't be rushing the Irishman back into action. Fans wanting to purchase tickets for the Northampton game are advised to do so in advance to avoid queues on the night.
Read more
- November 04, 2008
Mail 4/11/08 Leeds reject Newcastle bid for midfield maestro Fabian Delph as Arsenal continue to circle Leeds chairman Ken Bates has confirmed that the Elland Road club has  rejected a recent bid from   Newcastle   for Fabian Delph. The 18-year-old midfielder has attracted interest from Premier League clubs following a string of fine displays in his breakthrough season with the League One outfit. Arsenal   have been constantly linked with a bid for the England Under 19 international, but chairman Bates says that the Magpies have already made a move for the talented youngster. "I'm still amazed at a recent offer Newcastle made for Fabian," Bates told   Yorkshire Radio . "I won't tell you the content of the fax we sent back but it did end the conversation. "It's inevitable if the team does well predatory upper league clubs will try their luck without success. "Fabian Delph will be moving to Premier League - but we hope he'll be movin
Read more
More posts