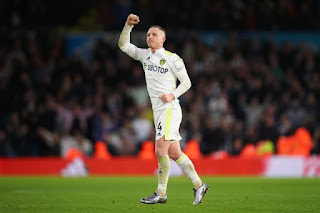 Leeds United hope to finalise and announce a new contract for midfielder Adam Forshaw this week or next.

The 30-year-old has proved a revelation for Marcelo Bielsa this season after completing a remarkable comeback from a 2019 hip injury that required complicated surgeries and extensive rehabilitation.

Forshaw's return was delayed a number of times through setbacks but after two years and 68 days without a league start he was named in the team to host Leicester City at Elland Road in November.

Since then the central midfielder has played all but 18 minutes of Leeds' last eight Premier League games and came off the bench on Sunday to feature in the FA Cup defeat at West Ham United.

The consistency of his performances and the energy he's brought to the midfield area have helped bolster his case for a new contract, with his current deal due to expire in the summer. He shone on his return against the Foxes and has ticked along nicely ever since. His tigerish display in the win over Burnley was particularly pivotal. Leeds have also taken into consideration his conduct during his injury nightmare. Forshaw himself has admitted the situation left him bitterly frustrated at times but he remained a positive influence at the club and played his part behind the scenes at Thorp Arch.

Speaking in December Forshaw revealed his hope that a contract extension could be sorted with the club.

"My kids are in pre-school, we've loved it, I've never enjoyed living somewhere as much as I've enjoyed living here and I've had a torrid time on the pitch, so that say a lot about the people and the area and what I think of the place. I'm just enjoying playing again and see what the future holds. I hope [to stay], I don't know. It's not up to me. I just want to keep playing, stay in the team and help them climb up the table."

A deal is expected to be concluded in the coming days as Forshaw prepares for important Premier League outings against West Ham United and Newcastle United.

Leeds are also in talks over a new deal for Brazil international Raphinha. Last month brought transfer rumours in his native country that he was bound for Bayern Munich but Leeds have never had an approach from the German giants.

The Whites are hoping to add to Bielsa's squad before the month is out with director of football Victor Orta actively pursuing a number of targets who could strengthen the midfield. Any departures, including the loan move Cardiff City want to conclude for Under 23s right-back Cody Drameh, could depend on the positive progression of Orta's recruitment efforts, given the current state of play with regards to injuries. Bielsa was without captain Liam Cooper, Pascal Struijk, Jamie Shackleton, Charlie Cresswell, Kalvin Phillips, Rodrigo, Tyler Roberts, Joe Gelhardt and Patrick Bamford for the FA Cup tie at West Ham United.