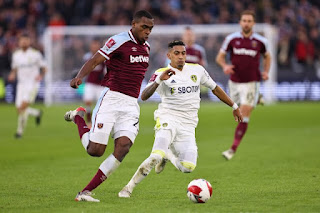 Here's the YEP take on a fine day out in the capital.

Jack Harrison took the headlines with the hat-trick but Pascal Struijk took the ball 15 times, recovering it more than any other player on the pitch.

Luke Ayling was a man possessed in the wake of West Ham's equaliser, driving Leeds forward. There was a collective desire from the players to recover the lead and get the win after a little wobble and a few mistakes. Ayling, Dallas and Klich in particular displayed body language that was reminiscent of the famous 5-4 win at Birmingham City. They were not to be denied.

A first ever career hat-trick gives him four goals in two games, having not scored at all in the Premier League before the turn of the year. His confidence should be soaring. His overall performance was good, too.

It was a superb performance to come back with and he kept Michail Antonio honest, if not entirely quiet. Their battle was one to relish and yet more evidence that Struijk is going right to the top.

Injury crisis or not, second season struggles or not, Bielsa can still get a tune from his players. The performance was a reminder of why fans love his style so much. A beautiful game, he called it, and Leeds played an enormous part in that. Going on the attack at 3-2 and not settling for what they had was brave in the extreme but made for an incredible spectacle.

The team's best player according to the manager and he looked it against West Ham. He terrified them on the counter attack and was so unlucky not to score from a free-kick.

They might be getting it wrong, as Moyes said, on the fixture scheduling front and their Covid-19 loophole might have had a bus, or buses, driven right through it, but this was the product of which everyone involved should be so proud. A wonderful game of football that VAR did not manage to ruin. More of this please.

Having returned from injury so impressively and earned a new contract, going off with a muscular problem in the first half was bitterly disappointing. He was playing very well when he went off. Leeds will be hoping it's a minor injury and a quick comeback. They need him.

Just like Forshaw, he was doing well when his hamstring appeared to go. There have been signs of improvement in Firpo and Leeds can scarcely afford to lose a left-back right now.

The West Ham manager probably has a point that their midweek game did not have to be shoehorned in between two fixtures against Leeds, but the time for making that point was last week. He did that and it felt fair enough. To do so again, so forcefully, after being beaten by a Leeds squad that needed teenagers just to get the game on, felt churlish. Leeds could not have played in midweek in any case because the two games they need to reschedule are against teams who had midweek fixtures. Fatigue may well have played a part for the Hammers but if you take your chances you get results and they failed to do so badly on at least two occasions.

Not tracking back in time to stop Harrison from scoring the first was bad, the Irons having a goal chalked off because he offside was unfortunate yet a little poetic but that miss at the end was dreadful. Bowen is a very good player having a great season so no one will be too hard on him. You can't help but wonder what would have become of him had Leeds bought him in January 2019 when he was so heavily linked with the club.

Leo Hjelde was better than a 6 in the player ratings. A couple of giveaways that stuck in the mind overly influenced the on-the-whistle rating he was given. At 18, he looks another fine prospect for Leeds. They've developed a knack of finding and developing exciting defensive talent. It was a Premier League debut to be proud of, worthy of a 7.