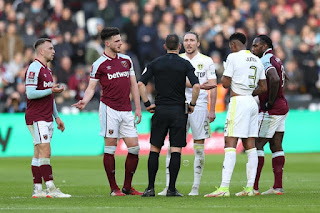 Zak Hardaker prefers the use of video technology in the sport he plays professionally, to the one used when he watches his beloved Leeds United.

The Wigan Warriors centre, formerly of Leeds Rhinos, made his views on VAR quite clear earlier this month after watching in horror as Manuel Lanzini’s goal against the Whites was allowed to stand despite Jarrod Bowen’s clear attempt to play the ball in front of Illan Meslier, from an offside position.

Like thousands of other Leeds fans, Hardaker felt compelled to pick up his phone and rant, on Twitter.

“Put VAR in the bin!!” was his offering to the debate.

“When I first saw the replay on the TV my opinion was that it was offside,” Halsey told the YEP.

“Once Jarrod Bowen makes that movement towards the ball, in doing so challenging an opponent from an offside position, he becomes involved in active play and interferes with an opponent. It should be given offside.

“I was shocked. It took a long, long time to get to that decision."

An explanation emerged that both the VAR Peter Bankes and his assistant Lee Betts felt Bowen’s actions did not clearly impact the ability of Meslier to attempt to make a save. The phase of play was then re-set and when Vlasic played the ball again Bowen was in an onside position and he put the ball in the net.

“Rubbish, garbage – they always make up some explanation as to why it’s the correct decision, they make it up as they go along,” said Halsey.

“They never come out and admit they’ve made a mistake.

“I’ve championed making the dialogue between the referees and VAR audible, we need to hear the conversation because if everyone hears what’s going on, they may not agree with it but at least we can understand how they reached that decision and accept it.

“Like we hear in cricket, in rugby, why on earth can’t we do that in football?”

In November of last year the conversations between officials in charge of Gloucester’s Premiership Rugby Cup win over Bath were not only audible to the TV audience, but fans in the stadium too.

In Hardaker’s sport, video technology is only used for televised games and the referee’s dialogue with the video referee is only available when a match is being broadcast by BBC or Premier Sports.

“It’s very helpful when you can hear what the video referee is saying.”

Football appears to have little excuse for following suit on that front, but according to Smith there is little else it can take from rugby league’s use of video technology.

“I don’t think it has improved the rugby league experience,” he said.

“The problems you’re having in football are no surprise to me because we’ve seen this in rugby league for the past quarter of a century. It came in in 1996 when Super League started. We only have it for televised matches, so there’s that inequity for a start. It was brought in just to iron out obvious errors over in-goal incidents, has someone got the ball down properly or have they dropped it? But it quickly expanded to looking at obstructions and knock-ons in previous play. A bit like I’ve noticed in the Premier League, sometimes they’re almost looking for reasons to rule scores out and I don’t think that’s what it should be for.

“My view is that rugby should go back to in-goal incidents, not incidents in general play, just to iron out obvious mistakes.”

Hardaker has a different view. “The rules are quite black and white in rugby league with going to the screen,” he told the YEP.

“I feel like rugby league has it simpler. Sometimes they get it wrong and obviously there can be controversy but I think more often than not they get it right.

“For some viewers it might be their first or second game and it probably helps them understand the game.”

A Leeds United fan since the age of eight when his step-dad and uncle swayed him towards Elland Road and away from his father’s Manchester United, he is a frustrated football fan due to VAR.

“One week it goes for you, the next week there’s a completely different decision, so it's the inconsistency,” he said.

“When Manchester United played Aston Villa, Cavani got blocked by a defender, I thought it was a 50:50 call. Then you’ve got Bowen impeding Meslier. It’s been like this, this year, though. I’m frustrated as a fan, it’s not consistent.

“Players are frustrated, they’re always talking about it in interviews, but I’ve been playing rugby league professionally for 10 years and can’t remember ending a game and complaining about offsides or knock-ons in interviews. You saw Mateusz Klich’s Instagram where he drew the squiggly offside line, that just doesn’t happen in rugby league. It’s week in and week out now with VAR. They need to simplify it and shorten the process.”

Another of his bugbears is the time taken to reach decisions and Smith, on this point, agrees that rugby enjoys an advantage, if only due to the natural pause afforded by a try being scored.

“If someone tallied up all the decision making in rugby league over a season and put a stop watch on, I reckon football’s would be three or four times as long,” said Hardaker.

“The referees aren’t sure, VAR aren’t quite sure – there was a game on recently and it took three or four minutes to decide on a goal.

“I think sometimes it adds to the excitement in rugby league, for neutrals at least, but in football it seems to be taking enthusiasm out of the game.”

Between Hardaker’s enthusiasm and Smith’s distaste for video technology in rugby league lies a universal truth – even in a sport where some are in favour of its use, perfection and unanimous agreement is not to be found.

“You are wiser if you try to simplify things rather than to make them longer and more complicated.”

The Premier League started out on the road to perfection when it introduced VAR in 2019 but after two years appears to be wandering in circles, encountering controversy at every turn.

There will be, you suspect, no turning back.

But with supporters like Hardaker still left to stumble around in the dark, grasping for explanations of decisions they cannot fathom, surely the least the game can do is let the world in on VAR conversations. Surely it would be a step in the right direction, towards simpler times?