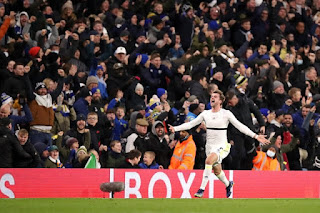 Marcelo Bielsa expects to be able to count upon a key trio of players returning for injury for Leeds United's Premier League trip to West Ham United.

Patrick Bamford, Pascal Struijk and Rodrigo could all be available for Bielsa, in a huge boost for the Whites.

Bamford returned from September ankle injury that kept him out for nine games, only to injure his hamstring celebrating a dramatic late equaliser against Brentford and sit out the last seven games. The hope was that he would return to face the Hammers in the FA Cup but tightness he felt in training last week kept him on the sidelines once more.

Struijk hasn't played since November due to a rare injury that occured when two bones in his foot collided in training and Rodrigo, the club's record signing, has been unavailable for Leeds' last seven games due to heel pain.

"He hasn't had a set-back, he's still evolving," said Bielsa of Bamford.

"His recovery still hasn't been finalised."

"It's probable that Pascal, Rodrigo and Bamford are options to return."

Bielsa still has an extensive injury list, however. Joe Gelhardt suffered an ankle injury iwhen a team-mate fell on him during a training session ahead of the cup game, while Tyler Roberts limped off against Burnley with a calf problem and Sam Greenwood picked up a knock at West Ham United last weekend.

The circumstances Leeds and Marcelo Bielsa find themselves in at present would be enough to send many others crashing. #lufc https://t.co/dqZwVcRbHz

Kalvin Phillips and Liam Cooper are among Bielsa's longer-term injury victims and the head coach says he does not expect them to make their comebacks before March, while Jamie Shackleton has been struggling with an Achilles problem and Charlie Cresswell was also landed on by a team-mate, leading to a shoulder injury.