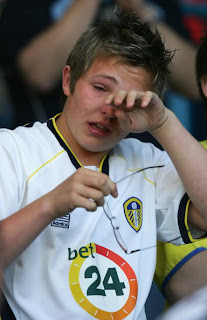 Sunday Times 29/4/07 Leeds fall into abyss Leeds 1 Ipswich 1 Paul Forsyth at Elland Road Anticipating the fall of a footballing institution is one thing. Watching it disappear into the abyss, with scarcely a shred of dignity, quite another. The scare stories that have multiplied with Leeds’ every step closer to the trap door became horrible reality at Elland Road yesterday when the club were all but relegated to the country’s third tier, and the behaviour of some of their supporters compounded the humiliation. During a dramatic finale, in which Ipswich’s late equaliser combined with Hull’s win at Cardiff to effectively seal the club’s fate, thousands of Leeds fans spilled on to the pitch in stoppage time, forcing officials to consider an abandonment. While the majority of home fans chanted "scum" and "you’re not fit to wear the shirt," it was at least 15 minutes before the pitch was cleared. Eventually, the players returned to complete the match, but it made no diff
Read more
- April 22, 2007 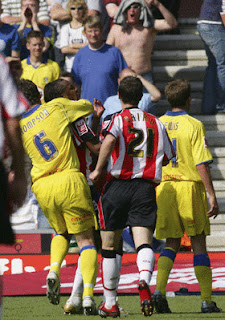 Sunday Times 22/4/07 Leeds slide closer to drop Southampton 1 Leeds 0 Rob Maul at St Mary’s stadium IF, AS appears increasingly likely, Leeds United, European Cup semi-finalists in 2001 and First Division champions only 15 years ago, are relegated this season into the third tier of English football for the first time in their 88-year history, this match could prove to be the most decisive moment in what has been a long and arduous season. Just when it seemed that Leeds had managed to secure a valuable and hard-fought away point, thus maintaining pace with Hull City, who remain above the relegation zone — and given themselves the essential added belief that they can avoid demotion to League One — they conceded a dramatic but cruel winner to Southampton substitute Bradley Wright-Phillips. Now, with two matches remaining the safety gap is just one point but Leeds, significantly, have an inferior goal difference. Staffordshire official Tony Bates’s decision to send off experienced midfield
Read more
- April 22, 2007 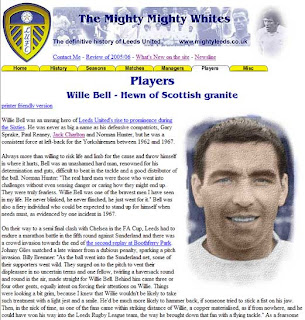 New pages uploaded at mightyleeds.co.uk Willie Bell – Hewn of Scottish granite Hewn of Scottish granite, the Scottish Hammer was one of Don Revie's unsung heroes as Leeds United rose from Second Division obscurity to the very top of the English game Read the full story at http://www.mightyleeds.co.uk/players/bell.htm There’s also a couple of major rewrites – Jim Storrie – The laughing cavalier Originally signed as a foil for John Charles, his goals were the foundation for the rise of Don Revie's 60s side - now expanded with the story of his time with Tommy Docherty at Rotherham http://www.mightyleeds.co.uk/players/storrie.htm Bobby Collins – Part 5 End of the line Revie's enforcer, the heart and soul, the rousing, restless, ferocious spirit - now expanded with excerpts from Terry Yorath's book covering his time in charge of Leeds reserves http://www.mightyleeds.co.uk/players/collins5.htm Parts 1, 2, 3 and 4 http://www.mightyleeds.co.uk/players/collins1.htm http://www.m
Read more
- April 15, 2007
Daily Mail 15/4/07 Heath raises Leeds hopes Leeds United 1 Burnley 0 By COLIN WOOD Matt Heath won it by a nose for Leeds to keep alive their hopes of Championship survival, but admitted he had no idea whether he had a long-term future at Elland Road. The central defender followed partner Lubomir Michalik, who headed a late winner against Plymouth a week earlier. Heath's golden goal came after 21 minutes and he was denied a quick second to make his side and their fans sit more comfortably by an astonishing save from Brian Jensen. Heath, who Leeds first took him on loan from Coventry in November before signing him in January on a short-term contract to the end of the season, knows it's still going to be tough to get out of the bottom three with two difficult away fixtures at Southampton and Derby and a home game against Ipswich left. "We need to win the home game and pick up as many points as we can away," he said. "We probably need another away win to be safe and
Read more
- April 14, 2007
Heath relief as Whites hold on Leeds endured another nerve-jangling finish as Matt Heath's first-half goal boosted their hopes of survival in a 1-0 win over Burnley Heath outjumped the visitors' defence to power home a 21st-minute header from Alan Thompson's corner, while Frazer Richardson saw his 35-yard first-half volley clatter the crossbar. The home side were unable to find a second goal and anxiously defended their narrow advantage against a disappointing Burnley outfit. Dennis Wise's relegation-threatened side stormed out of the blocks in a game they dared not lose with Heath giving them a deserved lead. But in the closing seconds of the first half Leeds goalkeeper Casper Ankergren pulled off a fine save to block Wayne Thomas' goalbound shot. Leeds were without suspended skipper Jonathan Douglas, so Robbie Blake returned to the starting line-up, with David Healy handed the captain's armband for the remainder of the season. Richardson returned to the back f
Read more
- April 11, 2007
Telegraph 10/4/07 Past returns to haunt Leeds By Trevor Haylett Colchester United (0) 2 Leeds United (0) 1 Just like their celebrated predecessors of 1971, Leeds trooped away from Layer Road in disbelief having conceded two late goals to reawaken their relegation fears. The late twist, as Chris Iwelumo and Jamie Cureton took their combined goal tally to 39, drops Denis Wise's team back into the bottom three. To compound matters, captain Jonathan Douglas was shown a red card as he left the field for foul and abusive language. Wise criticised his team, as the progress achieved during an unbeaten run of five games unravelled in "a mad 10 minutes". "We've conceded two poor goals because people weren't doing their jobs properly," he raged. It was the first encounter between the teams here since the famous FA Cup upset, but whereas the home team had covered themselves in glory 36 years ago they struggled to land a punch this time. Leeds could have made life mu
Read more
- April 02, 2007
Leedsunited.com 2/4/07 LOAN RULING In reponse to queries from fans about the number of loan players permitted to play at any one time, an abbreviated explanation below details the Football League regulations regarding loan players. The rules state that clubs can name no more than five players on loan from an English club for any fixture. Players who join from foreign clubs join on short-term contracts and as such are not "on loan" due to the registration process that has to be adopted for players coming from outside of England. As it stands the club currently has five players on loan from English clubs: Radostin Kishishev, Lubo Michalik, Jemal Johnson, Micky Gray, and Graham Stack. Casper Ankergren, who joined from Danish outfit Brondby, and Alan Thompson, who arrived from Scottish Premier League leaders Celtic, are classed as short-term contract signings, in keeping with the above. Armando Sa, Tore Andre Flo, and Robbie Elliott are all on short-term contracts.
Read more
More posts