Why murderball is a problem, but not for Leeds United - Graham Smyth's Verdict on win at West Ham - YEP 17/1/22 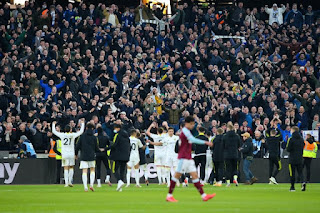 At the end of a week that brought questions over the suitability of his training methods during an injury crisis, Marcelo Bielsa sent his men out to grace the Olympic Park's London Stadium with a muscular, athletic, lung-bursting performance that fully deserved the 3-2 win at the end of it.

Patrick Bamford was among a host of unavailable players, Rodrigo was a man among boys on the substitutes bench and both Adam Forshaw and Junior Firpo limped off in the first half, yet Leeds somehow still had enough.

Had they crumbled in the face of a level of adversity that would have sent others scurrying to the Premier League with a filled-in postponement request form, Bielsa would have been metaphorically but soundly beaten with the hamstrings of Forshaw and Firpo. Suspicions, noted in the national press this week, about the relationship between murderball and its impact on players' bodies would have grown into a full blown forensic ex
amination.

But they didn't crumble. In fact, even with a 3-2 lead to protect, even with sufficient cause to stay compact and defensively disciplined in their own half, they ran after more with reckless abandon. Only another cruel VAR intervention and the woodwork robbed them of a fourth goal as they pressed on and on. It was murder on West Ham, who had to play in midweek and struggled to match the visitors' intensity.

It wasn't a perfect performance from Leeds, there were wobbles and mistakes, but there was an abundance of fight that, married to the clinical manner in which they capitalised on space West Ham gifted them, made them worthy winners.

A side often accused of naivety were ruthless and Jack Harrison, often unable to produce end product this season, scored all three goals.

The return of Pascal Struijk allowed Marcelo Bielsa to fight fire with fire, pitting his imposing centre-half against the indomitable Michail Antonio. He put Robin Koch in a defensive midfield role which freed Forshaw up to join Mateusz Klich further forward.

Between the three of them, their energy and intelligence gave the Whites a suffocating presence in the middle of the pitch, like a white blanket covering the Hammers.

It was obvious, from the off, that Leeds were in the mood. A move that swept from right to left earned an early corner. Daniel James nipped in to rob Issa Diop high up the pitch and create havoc.

The opener, on 10 minutes, was deserved. Luke Ayling sprayed a long ball down the right for Raphinha to run onto, his cut-back was struck goalward by Klich and Lukasz Fabianski could only palm the rebound to Forshaw who kept his cool and teed up Harrison.

West Ham were able to start creating, Declan Rice's trademark forward runs proving problematic before a pair of dangerous balls whizzed through the Leeds area, the second of which needed Firpo's intervention to stop Jarrod Bowen from scoring.

Then the injuries came and for a little while it was chaos. Forshaw and Firpo hurt themselves almost simultaneously, necessitating the 22nd and 23rd minute introductions of Lewis Bate and Leo Hjelde.

West Ham smelled blood and it took a huge block from Stuart Dallas to deny Antonio.

Struijk was unable to stay with Craig Dawson as a corner came in from the left, a train of bodies constructed by the hosts blocking the Leeds defender as his man met the delivery only to head wide with the goal gaping.

It was a warning Leeds did not heed. The next corner was an equally wicked delivery and Bowen simply spun to leave Dallas in his wake and power in a free header.

This was the first of two periods that looked almost insurmountable for Leeds, and yet they recovered to go ahead once more.

Retaking the lead from their own corner was so unexpected that when Ayling nodded Raphinha's cross to the back post and Harrison bundled it in, even the winger looked stunned. The celebrations took a second or two to kick in but there was no need for VAR, Harrison was well onside and the away end was bouncing.

The basketball game people associate with Leeds broke out, the teams taking turns to attack. Rice ran into the area and hit the sidenetting with only Meslier to beat, before good work from Bate fed Raphinha who put James in on goal, his shot too tame to trouble Fabianski.

Harrison then curled a ball down the left for the makeshift striker who cut inside and curled the ball a whisker to the wrong side of the far post as Leeds ended the half hoping they would not rue their missed chances.

That looked to be the case seven minutes after the break. Having failed to play out once and got away with it, Rice firing over after picking off Ayling's pass for Bate, they paid the price the second time. Ayling tried to feed Bate on halfway, the midfielder couldn't control under pressure and Rice found Antonio, he touched it on for Fornals and he slid the ball into the net.

The goal lifted the home support and for a few minutes it looked as if a wobbling Leeds were on the cusp of collapse. But a bit of hard work and an even bigger bit of magic put them back in front. Dallas stormed forward to intercept a pass, Raphinha split the Hammers with a through ball and Harrison dinked Fabianski for his hat-trick.

Suddenly it was Moyes' men looking fragile and only the post kept them from a two-goal deficit, Raphinha's beautiful free-kick bouncing off the woodwork.

Bielsa went for it then, laying his cards on the table with an attacking substitution, Rodrigo replacing Bate, and the Spaniard was straight into the action, unwittingly depriving his team of a fourth goal.

Ayling won it deep in his own half, fed Raphinha and he blew past Diop before cutting the ball back to Klich. The Pole finished with aplomb and Leeds looked home and hosed, until VAR struck again, deciding the glancing touch off Rodrigo that Klich's goalbound shot took on its way in was enough to rule it out.

It wasn't all rank bad luck though, West Ham had the ball in the net again themselves only for an offside flag to go up. Bowen, this week at least, was interfering with play.

Worse was to come for the ex Hull man, letting slip a huge chance to level by chesting the ball over Meslier's bar from a couple of yards out.

The final whistle was both a relief and a reward for the exhausted legs and gasping lungs of Bielsa's men.

What they do next will be key, with a fortnight left in the transfer window and an undeniable need for reinforcements, not to mention a game against Newcastle United. The intensity cannot drop in the recruitment department or on the training ground. It's all hands to the pumps and there's no rest for the wicked but two wins from two have Leeds up and running in the Premier League this year. They can't stop now.