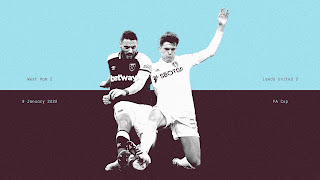 OUT OF THE HAT

Just for a moment the FA Cup held magical third round possibilities for Leeds United. Chasing an equaliser against West Ham United in London, they were getting warmer as the clock ticked further, a low cross evading Dan James with three minutes left, Crysencio Summerville putting pressure on by dancing, like a Dutch Joffy Gelhardt, into the penalty area.

In stoppage time Leeds won a corner and Illan Meslier, the goalkeeper, charged forward for it, a begloved randomiser whose presence could force extra-time. This is what cup football is supposed to do, to put you on the edge of your seat even when you might not rationally care about the chances of winning a cup. It’s what association football is great at, demolishing the narrative that dominates the spaces between games and letting the big moments stand for themselves. You can watch film of a goalie scoring from a corner ten years after it happened and know you’re looking at something pretty incredible, regardless of who it is, who their team was, who it was against or what they were competing for. You see enough to know it mattered. Meslier made this game matter, for a minute anyway, by making that possible.

But Meslier didn’t score, neither did anyone else from Leeds, and no sooner was he back in his goal than West Ham broke and Jarrod Bowen scored past him to secure their 2-0 win.

Ho hum, then, and the magic of our FA Cup in 2022 is better summed up by the relief among some Leeds fans when the fourth round draw sent West Ham to play Kidderminster. That’s one of the headline games, and for good reason, in romantic hope that the sixth tier Harriers might beat the Hammers. They probably won’t. But it wasn’t worth the risk that they might beat Leeds, so while a cup run always sounds nice, given the way our season has been going, we’re better leaving that sort of gamble to others.

I get guilty feeling that way about the oldest and least worst football cup competition, particularly in the anniversary year of Leeds United’s solitary 1972 win, but the match itself soothed my responsibilities. Was this an FA Cup third round tie? I saw no blood, no guts, no thunder, not much incident, and for the first twelve minutes, not even a foul. That was probably the best part of the game for changed and youthful Leeds, but maybe it says something that they didn’t even get a free-kick from their decent start. Once the two teams started taking interest in softly kicking each other instead of gently stroking the ball, West Ham started to dominate, as you might expect when their opponent’s spine included three players — Sam Greenwood, Lewis Bate and Leo Hjelde — making their first competitive starts. Defender Hjelde was the pick, playing safe with the ball and staying strong for the physical challenge with Michail Antonio. Bate looked as tidy as we might hope in midfield, but no more influential than could be expected; Greenwood was on the periphery up front through no fault of his own, but had a habit of trying to be spectacular when he should be safe, and vice versa. Only Hjelde made it beyond half-time, but looking at all three was one of the game’s few pleasures.

Ten minutes before half-time West Ham took the lead with the only other bit of play that was recognisably cup. Nikola Vlasic forced his way into United’s penalty area, and Hjelde did superbly to chase and stop him from shooting in clean. He knocked the ball forward, where Antonio and Bowen had run offside, but in an old fashioned scramble Bowen and Vlasic between them knocked the ball away from Meslier, and Manuel Lanzini knocked it in. Frantic as it was, the goal was easy to disallow, and I wonder if without the safety net of VAR the assistant would have made a decision with their flag: Bowen was offside, Bowen challenged Meslier for the ball, no goal. Leaving it up to the goggleboxers at Stockley Park, though, brought pixels into play with freeze-frames and countless rewindings until they’d convinced themselves out of disallowing it. When it comes to great FA Cup moments in history, nobody will think about that time everybody waited around while some people in another building timed pressing play and pause on their TV screen, seeking a subliminal message.

Leeds brought on their senior hitters for the second half, but Raphinha couldn’t get into the game, and Stuart Dallas couldn’t get into one position, as first a tactical change to bring Adam Forshaw on for Luke Ayling moved him from midfield to right-back, then when Junior Firpo felt after effects from a first half collision with Meslier, to left-back. That brought Cody Drameh on, followed by Summerville, and despite playing the full five subs that managers like Jurgen Klopp shriek for (to stubborn, amused resistance from counterparts like Sean Dyche) Marcelo Bielsa was not picking cards from a strong deck. The substitutions weren’t improving the team, but the team was playing better out of sheer force of FA Cup momentum: West Ham were bound to start trying to protect their place in the next round eventually, and that’s when Leeds had some hope. A volley struck into the six yard box by Mateusz Klich, pinballing wide off James and Jackie Harrison, showed exactly where Leeds United’s luck was at.

And that was that. In some ways Leeds’ involvement in this year’s FA Cup third round was just an interlude between opportunities to ask Bielsa about injuries. After the game he gave more detail about Gelhardt’s ankle than he did on Friday: he’s still out for about three weeks, but now we know a teammate fell on him, hopefully not the same teammate who dislocated Charlie Cresswell’s shoulder by falling on him. He had new things to tell about Pat Bamford, who was supposed to be a possibility in this match but didn’t appear, because after recovering from the injury he got against Brentford after recovering from the injury he got against Newcastle, now has an injury below his hip that hasn’t been quantified yet. These bulletins, plus Firpo’s blurred vision and another round of sparring about transfers (Bielsa hasn’t changed his views since Friday, but fair play whoever asked), felt as significant as anything in the game. It won’t be like that next Sunday, and hopefully the result won’t be either, and it’s all a bit of shame that, after all the things Leeds United’s crocked season have taken from us so far, enjoying the FA Cup should join the list. When you stop wanting to win, you’ve lost, but that’s the magic of the cup for you.