Showing posts from November, 2007
Show All
- November 24, 2007
Leeds United: Let High Court rule on points penalty By Phil Hay LEEDS United have challenged the Football Association to allow the High Court to decide on the club's challenge against their 15-point deduction. United dispatched a letter to Soho Square yesterday requesting a legal review of their case after expressing fresh concerns about the independence of senior officials at the FA.The demand was in the wake of the FA's promise of a "root and branch" review of the workings of the governing body after the sacking of England coach Steve McClaren on Thursday. United chairman Ken Bates has made two previous applications to the FA, one directly to chairman Geoff Thompson, pleading for an assessment of the process which saw Leeds deducted 15 points by the Football League in August. An independent commission rejected United's original grievance, and Bates claims his second approach to Thompson – highlighting perceived inconsistencies in the FA's first decision – wa
Read more
- November 10, 2007 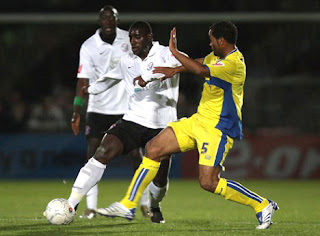 Daily Mail 9/11/07 Casper to the rescue for Leeds By RAY MATTS The clock was turned back 35 years at Hereford's Edgar Street ground last night. The compact stadium next to the cattle market was full to the rafters for an FA Cup tie, a big name club from the North were in town and local legends Ronnie Radford and Ricky George were on the tips of tongues. The talk was of giant-killing. That may now have to wait until the replay at Elland Road on Tuesday week. The opposition were more fallen giants than the mighty Newcastle outfit in 1972, but Leeds had a big enough reputation to send a shiver of expectancy down the spines of fans of the League Two minnows. The fact that the Yorkshire club are now just one rung above them in the league gave Graham Turner's in-form side the belief that they could cause an upset and Hereford tried manfully enough in the first half to deliver the goal which they suspected would put Leeds on tenterhooks. The likes of seven-goal Trevor Benjamin and six
Read more
More posts