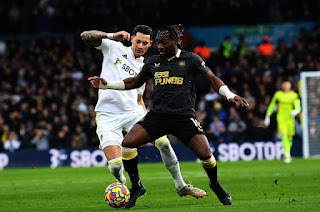 IT was Muhammad Ali who famously said that he 'floats like a butterfly and stings like a bee'.

Unfortunately, on one of the most important days of the season, Leeds United floated like a butterfly at times, but unfortunately stung like one.

Newcastle, without an away win since May ahead of kick-off, are grateful for anything that can get at the minute amid their grim relegation fight.

Here, they were afforded an inkling of hope, with Jonjo Shelvey's 75th-minute free-kick yielding a poor mistake from Illan Meslier, who let his low shot escape his clutches.

The move which led to the free-kick started when Tyler Roberts - who had a dificult day from the bench - lost the ball and Diego Llorente was penalised for fouling Javier Manquillo to present Shelvey with his chance - and a huge moment in the season of Newcastle, who were provided with the kiss of life.

For all of Leeds getting in good situations, their final ball was pitiful, sadly.

News of relegation candidates Everton’s home loss ahead of kick-off served as a nice little pre-match boost for both Leeds and Newcastle, who both had their moments in a first-half which was intriguingly poised - if scoreless - at the interval.

Leeds showed trademark intensity and threatened on the left-hand side for much of the first period before getting Raphinha into the game on the opposing flank and testing Paul Dummett.

At the other end, Newcastle’s chief danger came in the shape of the mercurial Allan Saint-Maximin in particular.

Leeds got in some excellent situations, but lacked a killer touch in the business zone and ability to pick out a team-mate in the box. Or a player to ‘gamble’ with their run.

They looked what they currently are - a side playing without a recognised centre-forward.

Newcastle have a bonafide one who Leeds know plenty about in Chirs Wood, but he was mercifully kept quiet in the first half.

Leeds - who welcomed back Diego Llorente and Rodrigo - saw their best moment arrive on ten minutes when Dan James - operating as an auxiliary centre forward - latched onto Raphinhas’s cut-back, only to see his point-blank effort yield a top-notch one-handed save from Martin Dubravka.

Jamal Lascelles also had to be alert to block a goalbound effort from Rodrigo, who cut inside on the left after being afforded plenty of space.

Newcastle’s big opportunity came just before the half-hour when a brilliantly-struck volley from Jonjo Shelvey was blocked by IlIan Meslier.

On the restart, the initial pressure and intent came from Leeds. Once again, they lacked that finishing touch.

Newcastle gradually got back into the game, with Strujik blocking a dangerous shot from Saint-Maximin, while tempers started to get a little fractious with the game on a bit of a knife-edge with Dummett and Saint-Maximin both cautioned along with James, who caught Dubravka late.

Leeds then conjured a big moment, but it ultimately ended in frustration.

Harrison skipped bast several challenges after an excellent move and after Lascelles blocked his goalbound shot, James could not convert the loose ball at the far post.

At the other end, Fraser also played in Wood for his moment before substitute Sean Longstaff fired a shot wide, with his reaction suggesting he should have gone better.

He need not have feared as Newcastle did have their moment and almost added a late second with Meslier denying Willock with Newcastle looking the side most likely to add a second goal and not Leeds.

Unfortunately, it could not atone for his error earlier.