Showing posts from September, 2008
Show All
- September 27, 2008
Leedsunited.com 27/9/08 ROBBO WINS IT  27 Sep 2008 Robinson goal secures Elland Road win against Hereford... UNITED 1 (Robinson 72), HEREFORD 0 United : Lucas, Richardson, Marques, Telfer, White (Hughes 78), Howson, Douglas, Delph, Beckford, Becchio, Robinson (Snodgrass 85). Subs: Ankergren, Prutton, Kilkenny. Hereford : Randolph, Jackson, Broadhurst, N'Gotty, Rose, Hudson-Odi (Smith 81), O'Leary, Diagouraga, Done, Johnson (Taylor 81), Chadwick (Ashikodi 68). Subs: Samson, Taylor, Smith, Beckwith. Referee : G Laws (Whitley Bay) Booked : O'Leary, Broadhurst (Hereford) Att : 25,676   United boss Gary McAllister made two changes from the side which won 2-0 at Carlisle last weekend, with Andy Robinson replacing Andrew Hughes and Jonny Howson in for Neil Kilkenny. And it was Robinson who had the first shot on goal when he tested Darren Randolph with a shot from distance after five minutes. Robinson was also instrumental when Hereford defender Richard Jackso
Read more
- September 27, 2008
Yorkshire Evening Post 24/9/08 Leeds United cash in with late gem By Phil Hay Leeds United 3 Hartlepool United 2 Lower league clubs are trained in the business of milking cup competitions for every possible penny, but there comes a point where the line between money and ambition begins to blur. Andy Robinson's focus was spread over two alternative scenarios last night after his goal of supreme skill or obscene luck – only he knows which – entered Leeds United into the fourth round of the Carling Cup. A draw against Liverpool would be nice, he confessed, but no better than another tie at Elland Road against a team in United's metaphorical league. Gary McAllister agreed in principle, unable to hide his inherent taste for cup football.   "I'd be pleased with a home draw against anybody," he said. This is not, yet, a competition that Leeds can expect to seriously influence or, in their wildest thoughts, plan to win but the arrival of the last 16 should
Read more
- September 20, 2008
Yorkshire Evening Post 20/9/08 Leeds United end Carlisle's unbeaten home record By Phil Hay Carlisle 0 Leeds United 2 Billed as a collision between two of League One's most accomplished strikers, it was perhaps inevitable that yesterday's game at Brunton Park would be decided with the help a less conspicuous forward. Jermaine Beckford and Danny Graham have shared 17 goals this season, enough to set them head-to-head during the decision-making process for August's player-of-the-month award, but it was the boot of Luciano Becchio which was primarily responsible for giving Carlisle's purposeful start to the term another fierce shake. Becchio's name is unfamiliar in Cumbria and, before July, it had never been heard in Leeds, but it seemed fitting that a player whose unselfish performances have so greatly influence Leeds' recent surge should eclipse Beckford and Graham for 86 minutes. The Argentine striker poached the game's opening goal in
Read more
- September 13, 2008
Yorkshire Evening Post 13/9/08 United pass test of mettle Swindon 1 Leeds United 3 Last week's victory over Crewe Alexandra won Leeds points for style, but United showed the fight needed to complement that flair during a performance at Swindon which was every bit as creditable. Leeds hit a purple patch eight days ago, dispatching Crewe with a flamboyant swagger and five excellent goals, but the result secured in dire circumstances yesterday cannot rank any lower in the list of quality displays under Gary McAllister. United's boss predicted that their visit to the County Ground would be a grinding contrast to the swashbuckling fixture seen at Elland Road last Saturday, but he could not have guessed the extent to which Leeds would be asked to scrap for their points. Nor could he have complained with the response of the 10 players who took up that exhausting fight. Leeds lost Alan Sheehan to a red card eight minutes into the League One clash, a dismissal which did the le
Read more
- September 08, 2008
Yorkshire Post 8/9/08 Leeds United 5 Crewe 2 - Teen talent Delph proves instant hit as Leeds reaffirm credentials By Ian Appleyard LEEDS United wonderkid Fabian Delph was dubbed the new Steven Gerrard after a performance that confirmed his status as a new hero of Elland Road. Delph might be small in stature but his talent is massive – which is why Leeds have moved swiftly to secure his services on a four-year deal. That won't put a stop to Premier League clubs chasing his signature of course but team-mate Andy Robinson hopes the teenager will go all the way to the top by staying at Leeds. Robinson, who grew up with England star Gerrard on Merseyside, says Delph, 18, has the 'world at his feet'. The teenager stole the show against Crewe Alexandra and his first goal in senior football opened the floodgates as Leeds smashed in five. "Fabian is going all the way to the Premier League and, hopefully, he will take Leeds United there too," said Robinson. "He is just
Read more
- September 07, 2008
Sunday Times 7/9/08 Gary McAllister can see the light Leeds 5 Crewe 2 John Aizlewood at Elland Road EVEN at the end of the longest, darkest night, there must be a dawn. For troubled Leeds United, it just might have come with a demolition of Crewe Alexandra so absurdly one-sided that, for a moment, the notion held by Elland Road diehards that their team are marooned at a level two tiers below their natural station did not seem entirely quixotic. Yet the prematch storm clouds with gathered over Yorkshire were not wholly meteorological. Leeds kicked off without a league victory since the season’s opening day and much as their supporters invoked a now imaginary rivalry with Manchester United, Elland Road was half-empty. “There was pressure before the game,” admitted manager Gary McAllister. “But for 90 minutes we were perfect. What happened after that reminded us that football can kick you in the backside as well.” Indeed, when the dust had settled, the only surprises were that Leed
Read more
- September 06, 2008 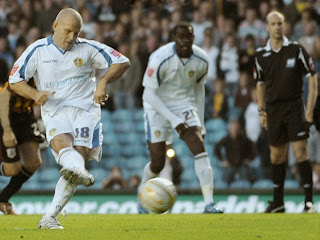 Times 3/9/08 Leeds plead guilty to FA charge Times Online Leeds United have pleaded guilty to a FA charge of using an unlicensed agent. The club have admitted breaching FA regulations during the transfer of Anthony Elding from Stockport County in January 2008. Elding has since left the club to join Coca-Cola League One rivals Crewe Alexandra. "Leeds United can confirm that the club has pleaded guilty to the Football Association charge for using an unlicensed agent in respect of the transfer of Anthony Elding from Stockport County in January 2008," a club statement read. "The club has requested for a personal hearing and no further comment will be made, other than we would like to re-iterate the fact that no payment has been made or is alleged to have been made to the agent involved in respect of the transfer." Leedsunited.com 3/9/08 JERMAINE'S GOAL The Football League have ruled that Jermaine Beckford should be credited with our first goal against Bristol Rove
Read more
More posts