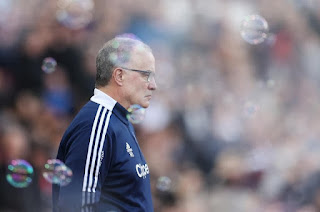 There was a hint of helplessness as Marcelo Bielsa pondered aloud the quandary posed by the FA Cup this season, ahead of Leeds United’s tie at West Ham United.

There were hints of it in his side’s performance too, as they exited in the third round for the fourth successive season.

“How do you harmonise a competition that is played this Sunday but how do you not link it with a repercussion that it has on the next game in the Premier League?” he asked on Friday afternoon.

“And what do you do when you have fewer than 10 [senior] players to look out for for the game this Sunday and then the following Sunday and what do you do to compare the importance of each game and to make the decisions which are the most favourable for the club?”

On one hand, Bielsa loves the romance of the FA Cup, a tournament that allows those poor in finance but rich in history to cross swords with the wealthy.

On the other hand, his small squad is beset by a fearsome injury crisis that somehow worsened still after his Friday afternoon press conference, Patrick Bamford’s return to action delayed by an unidentified ‘knock’ beneath his hip.

Even if Bielsa wanted to play his strongest possible XI and give the FA Cup its proper due, Leeds’ position in the Premier League and the caution he must exercise over player availability are impossible for him to ignore.

The ratings are in 👇 #lufc https://t.co/XlBrfsjBNb

Of course, his record of making several changes in this competition and the side he put out for a humbling defeat at Crawley Town last season will be sticks used to beat him, but the crux of his argument is one of unerring consistency - there are too many games and the integrity and quality of historic competitions are being eroded by the demands on players.

In any case, the choice to go strong or make changes was largely taken out of the Argentine’s hands by the sheer number of absentees for this game.

The importance of Adam Forshaw, Raphinha and Stuart Dallas for Leeds’ top-flight survival bid saw them drop to the bench for a much-needed rest, with full debuts handed to Under-23s trio Leo Hjelde, Lewis Bate and Sam Greenwood.

The youngsters were up against it, Hjelde tasked with keeping Michail Antonio quiet, Bate facing a quality international midfield of Declan Rice and Tomas Soucek and Greenwood leading the line against the far more experienced Issa Diop and Craig Dawson.

In the early stages they acquitted themselves well enough. Hjelde stuck with Antonio’s run and eased his man off the ball.

Bate was popping up in space to try and dictate Leeds’ time in possession and Greenwood tried his luck with a number of shots from long distance.

West Ham had more threat about them, Antonio giving Hjelde some awkward moments but troubling any Leeds player who came near him, regardless of their experience. Jarrod Bowen was serving reminders of why he was once a Whites transfer target and forced Luke Ayling into a goalline clearance with the game’s first real chance, although Leeds believed the ball had gone out of play in the build-up.

What a drab first half lacked in entertainment it more than made up for in controversy with a strange, disputed goal on 34 minutes.

Antonio was at the heart of it, proving difficult to contain as he peeled left and then curled a low cross into the area to create mayhem.

Nikola Vlasic turned in the area and although Diego Llorente made a challenge, Vlasic’s touch and Bowen’s run across Illan Meslier did enough to interfere and the ball dropped for Manuel Lanzini to finish. The problem, as Leeds were keen to point out to referee Stuart Attwell, was Bowen’s offside position as Vlasic touched the ball on and his obvious interference.

Yet, despite a lengthy review by VAR Peter Bankes, the goal was somehow allowed to stand.

Emboldened, the Hammers went after a second, Antonio flashing Ben Johnson’s cross wide and then getting the better of Hjelde to start an attack that ended with Meslier saving from Vlasic.

Bielsa replaced Bate and Greenwood with Dallas and Raphinha at the break and sent Forshaw on for Ayling on the hour mark, but West Ham were in control and comfortable - yet more good work from Antonio presented Bowen with a chance and Meslier with a big save to make.

Neither side were creating much in the way of excitement or final-third action but one didn’t have to and the one in desperate need couldn’t spend enough time in the opposition half to do so.

They found themselves losing the ball all too easily as West Ham flexed their muscle in the middle. Bielsa was forced into another change when the lingering effects of a first-half collision between Meslier and Junior Firpo saw the full-back depart, Cody Drameh taking his place, and Crysencio Summerville later took Hjelde’s place.

Summerville was, at least, bright and lively but, like so many of his team-mates, couldn’t find the necessary magic to pull Leeds level.

At the very least, though, Leeds had a go.

The latter stages of the second half saw more of the action take place in West Ham’s half and they did have a moment or two. Klich slammed a volley across the area that hit Harrison and bounced wide and, with two minutes to go, Harrison was on the other end of similar frustration, drilling a ball into the goalmouth only for it to hit Daniel James and go behind.

Leeds’ urgency to rescue the tie left them helpless, as West Ham broke from a stoppage-time corner and Antonio rolled the ball to Bowen to finish the tie as a contest.

“Right now we have nine players who cannot play, to manage that situation has its difficulties,” said Bielsa.

“Today. if we had played an alternative team, that’s to say if all the Under-23s had played, they would have claimed I didn’t respect an historic competition.”

Only the Premier League remains for Leeds now this season and, on that front, whether by against-the-odds results earned despite the injury crisis, the quick recovery of key absentees or the addition of new signings, only they can help themselves. And help themselves they must.