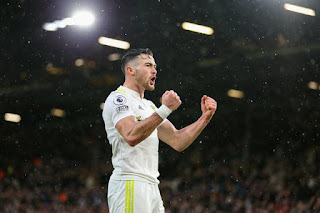 Jack Harrison says Leeds United have a coach who will always get the best out of his players - and more.

Winger Harrison is now in his fourth season at Leeds but his first as an outright Whites player following his permanent switch from Manchester City last summer after three seasons on loan.

Harrison first arrived at Elland Road just one month after the appointment of Marcelo Bielsa as head coach and the winger says he and his team mates are working for a boss who knows exactly how to best utilise the tools at his disposal.

The Whites stormed to a ninth-placed finish as a newly-promoted side last season as Harrison bagged a career best eight goals and eight assists.

The former England under-21 international has been quieter this time around but opened his account when netting the opener in the 3-1 win at home to Burnley at the beginning of the year which put an injury-hit Whites eight points clear of the drop zone.

Leeds, who are fifth-bottom, return to league action on Sunday afternoon with an away trip to fourth-placed West Ham United, ahead of which Harrison has hailed the club's head coach.

"I think if you are not around him like the players are, he can definitely be an intimidating character," said Harrison of Bielsa in an interview on Soccer AM, asked what Bielsa was like.

"He says hello to everyone when he walks in and he gives a smile and a wave but that's about it, you won't hear much else from him.

"But for us players he is very demanding, he works us really hard and gets the best out of his players.

"He knows what he wants and he knows how to push his players to the limit and beyond that as well."