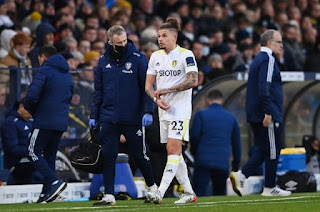 Leeds United's Kalvin Phillips is 'feeling good' and targeting a March return from his hamstring injury.

The Whites midfielder has been missing from Premier League action since December 5, when he limped off against Brentford at Elland Road.

Phillips has undergone an operation to fix the issue while also completing recuperation on a shoulder problem whilst unable to play.

The latter almost saw the England international ruled out of last summer's delayed Euros though he instead helped Gareth Southgate's team to the final of the competition.

Phillips is among a number of Marcelo Bielsa's senior squad currently sidelined in the Thorp Arch treatment room.

No less than nine first team options missed the club's 1-0 defeat to Newcastle United in the top flight last weekend.

Bielsa's men are in 15th place amid the current break from on-pitch action - sitting seven points above the drop zone after 21 games - and will be hoping to have a few players back for their next game at Aston Villa on February 9.

"It's been seven weeks now since I had my operation. I'm in the gym and doing a lot of leg weights and stuff, it's feeling good.

"Obviously [until Newcastle] we were going through a bit of a good stage, we won two tough games, so I was thinking to myself that I wasn't going to get back in the team if we carry on like that.

"You know how it is. All Leeds fans and all the players that are out of the team want to play and we're all kicking every single ball from the sofa."

Asked about when he was hopeful of a return, Phillips said: "Hopefully soon, maybe March. That's what I'm aiming for. If it's any sooner then it's a bonus."