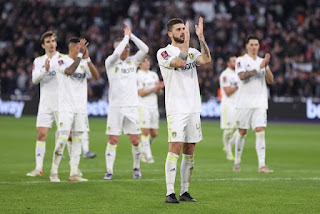 EVEN Specsavers got involved.

Everybody, it seemed, could see that Manuel Lanzini’s opener for West Ham in Sunday’s FA Cup clash against Leeds United should have been disallowed.

Everybody apart from referee Stuart Attwell and the game’s VAR officials that is.

Yet Whites boss Marcelo Bielsa refused to complain about the officiating or the result as an injury-hit Whites exited the FA Cup at the third round stage for a fifth year in a row.

This, though, felt very different to the defeats at Newport County and Crawley Town of recent years with Leeds very much the underdog this time around, even with the Hammers and Whites both Premier League sides.

Bielsa was set to welcome Bamford back from a hamstring injury and start the Whites No 9 against the Hammers, only for the striker to pick up an injury just below his hip in training.

Yet a Leeds side featuring three full debutants remained competitive until the closing stages against the Premier League’s fifth-placed team.

The Whites boss gave debuts to youngsters Leo Hjelde and Lewis Bate plus a first start to Sam Greenwood and a strong Hammers side featuring top scorer Michail Antonio and England international Declan Rice began brightly, Jarrod Bowen firing wide and then seeing a firm shot cleared off the line by Luke Ayling. More danger followed as Antonio’s whipped effort from the edge of the box was deflected just over.

But just as Leeds began to threaten themselves, Bielsa’s side fell behind in controversial circumstances on 34 minutes.

Nikola Vlasic turned Hjelde before making his way towards goal but Hjelde produced a fine block, after which Whites ‘keeper Illan Meslier looked set to gather the loose ball.

But Vlasic and then Bowen both got in Meslier’s way and made slight touches before Lanzini thumped home a low finish through a crowded box.

Bowen had been in an offside position before blocking Meslier’s path but referee Attwell allowed the goal to stand and VAR produced its latest puzzler by giving the goal the green light.

The decision was met with widescale criticism and even Specsavers chimed in, their official Twitter account responding to talkSPORT asking if the goal should have been disallowed for offside with a reply of “depends if you’re wearing a blindfold or not.”

But the incident proved key, West Ham only putting themselves out of sight in the 93rd minute when Bowen finished off an Irons counter attack from a Whites corner. Before then, both sides had squandered good chances to bag the game’s second goal, Jack Harrison and Dan James both missing the target from close range for Leeds for whom rested big guns Raphinha, Stuart Dallas and Adam Forshaw all came off the bench. But Antonio and Ryan Fredericks also went particularly close for the Hammers and Bielsa was in no mood to moan, despite the injuries and VAR. “I think it corresponded that they won the game, they created more danger than we did,” said United’s head coach.

Asked if he felt West Ham’s opener was offside, the Whites boss reasoned: “It’s a decision that I prefer to accept what the referees say, not because I haven’t created an opinion. But I think it’s a collaboration that us coaches and managers should make to accept the decisions of the referees, even if they jeopardise us.”