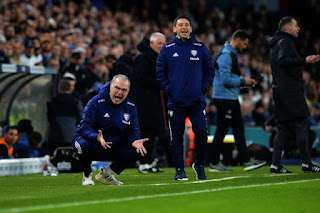 Marcelo Bielsa was left to rue Leeds United's missed chances in a 'very frustrating' defeat at home to Newcastle United.

In a goalless first half Leeds carried the most danger and created the most chances, predominantly through the wing play of Raphinha and Jack Harrison, but Newcastle had their moments too. Illan Meslier was forced into action by a sweetly-struck Jonjo Shelvey volley and set-pieces caused a few problems for the hosts.

The second half was a more even affair and both sides had chances, particularly in a frenetic end-to-end passage of play when the killer final ball eluded Leeds and their visitors.

Newcastle won it with a 75th minute Shelvey free-kick that somehow deceived Meslier and Eddie Howe's men should have made the three points safe from a number of counter attack opportunities late on.

The result, coming on the heels of back-to-back Premier League wins and at the hands of a relegation zone dwelling side, was a 'very frustrating' one for Bielsa.

"It was a game to show our differences, to have some consistency and it was a very important opportunity that we couldn't take advantage of," he said at full-time.

"We had many moments to unbalance the game. We could unbalance them a lot but we couldn't convert. Normally in the games where you could score and you don't, some detail unbalances the game against you. I have the sensation that that's what happened. Even if in the last 15 minutes we failed to create enough danger, prior to that we had done sufficiently to be ahead."

As the game slipped away from Leeds they seemed unable to create chances with the same quality they showed in the first half. Bielsa felt he could make alterations that would help but instead the opposite of what he wanted transpired.

"We always got to the final third with ease," he said.

"We could pick the final pass, whether it be from out wide or through the centre. In the closing of the game we were lacking clarity. We lost the capacity to go on the outside. I swapped Raphinha and Harrison's sides because I saw all the play was going down the left and Raphinha is our most unbalancing player. From there on all the opposite happened. The ball started going down to the right where Raphinha was initially. That prevented us from getting in behind on both sides. Up until that moment we had it down the right but with less balls available. We had it down the left because Harrison was making contributions. After I thought that with Tyler, Rodrigo and Gelhardt we were going to find passes in the box, but it didn't happen. That's why I think in the moment where we had a major offensive, Harrison, Roberts, Gelhardt, Rodrigo and Raphinha, plus the company of Ayling and Dallas, we didn't create sufficient danger."

"I brought on Gelhardt and Tyler to do the role of Rodrigo, but Rodrigo only lost importance toward the end of the game. Given that James was on a caution, I thought that Tyler was on a first step to unbalance the game and that’s how I did it. While Klich was playing well, I preferred to have three players who could score, and because Joffy can nick a goal and Tyler and Rodrigo also had the characteristics of the number nine. But football has those things, we created more chances when we had Klich and James than when Tyler and Gelhardt came on."

Newcastle received a number of cautions for time wasting during the game but Bielsa said it was down to the officials to manage the situation.

"What you signal out was evident, and those in charge have sufficient tools to prevent it," he said.
Illan Meslier Jack Harrison Marcelo Bielsa Newcastle Raphinha