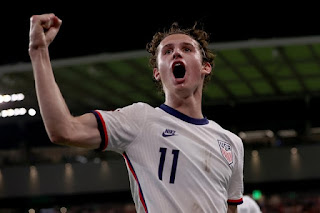 Leeds United believe many January transfer options would not be an improvement on young players already at the club, according to CEO Angus Kinnear.

Writing in his programme notes for today's crucial Elland Road clash with relegation-threatened Newcastle United, Kinnear said the addition of players in the transfer window could hamper the development of players who have recently broken into the first team due to injuries to senior players.

Joe Gelhardt has made the most noteable first team breakthrough up front, while both Lewis Bate and Leo Hjelde impressed on their Premier League debuts at West Ham United last weekend.

"In blooding Lewis Bate and Leo Hjelde, Marcelo [Bielsa] broke a divisional record by having handed eight teenagers their debut in a single season," said Kinnear.

"While this has led to some factions understandably bemoaning a perceived lack of strength in depth in our squad, it promises an extremely bright future for our great club."

Leeds are attempting to bring in one new player before January's deadline, however, submitting a second bid of £20m for RB Salzburg midfielder Brenden Aaronson this week. The YEP understands there is currently no movement towards a deal and Salzburg are believed to consider the 21-year-old an important part of their bid to maintain domestic dominance while eyeing an historic Champions League last 16 clash with Bayern Munich. If Aaronson is not to depart Austria for West Yorkshire in the next nine days, the Whites could look to make a move in the summer.

Kinnear, meanwhile, concedes that not everyone will agree with the club's contentment to place faith in youth rather than bolster Bielsa's squad with expensive signings. He insists there would be downsides to extensive January recruitment.

"We are confident that we are building a long-term competitive advantage in the recruitment and development of world-class young talent," he said.

"Central to this strategy is our ability to promise and deliver to our young players a fast-track to first team football, as well as a culture where there is a belief in the process and where the players, irrespective of age, are trusted to deliver on the Premier League stage.

"This strategy clearly impacts our evaluation of transfer targets - where our analysis indicates that many January options, requiring an eight-figure investment, would not be a material improvement on the current performances of emerging players such as Bate, Hjelde and Joe Gelhardt. Morever, signing other options would block such youngsters' development and would offer nowhere near the long-term potential. Simultaneously, any January activity has an opportunity cost on more optimal moves in the summer.

"As a board we have always tried to be transparent with supporters in the belief that it is better if our recruitment strategy is disagreed with by some fans, rather than misunderstood by many."